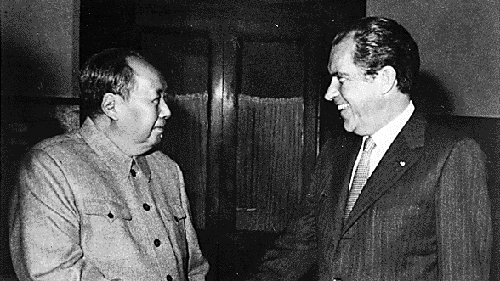 The mainstream press has just come out with a Chinese expose that has informed an undoubtedly surprised world that in 1969 the USSR wished to settle its historical score with China and launch a nuclear attack. The USSR merely wanted an assurance of U.S. neutrality. Far from the USA welcoming this de-clawing of the growing dragon, it instead threatened that there would be retaliation from the U.S. against Russia.

According to a report first carried in the Daily Telegraph, Chinese historian Liu Chenshan, writing in an officially sanctioned newspaper, stated that the threat “came in 1969 at the height of a bitter border dispute between Moscow and Beijing that left more than one thousand people dead on both sides.” [1] 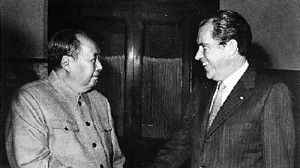 Liu quotes Soviet premier Alexei Kosygin as stating to Soviet leader Leonid Brezhnev on October 15 that “Washington has drawn up ‘detailed plans’ for a nuclear war against the USSR if it attacked China.” The Telegraph writers also speculate that Liu is likely to have had access to official archives given the appearance of this as part of a series of six articles in an official news source.

The Telegraph article continues: “The historian claims that Washington saw the USSR as a greater threat than China and wanted a strong China to counter-balance Soviet power…” They also conclude: “Mr Liu, the author, admits his version of history is likely to be contested by rival scholars.”

However, this Chinese revelation is not “new” to informed observers. The Russian desire to settle with China, despite the cynically named Sino-Soviet Treaty of Friendship, Alliance and Mutual Assistance that had been signed between Mao Zedong and Joseph Stalin in 1950 – which relegated China to colonial status rather than pave the way to super-power status[2] – came amidst the culmination of border disputes that had been ongoing since 1960.[3] The largest conflict had taken place on March 2, 1969, when Chinese troops ambushed Russian troops on the uninhabited Damansky Island in the Ussuri River, killing 32 Russians. The Soviets responded on the night of March 14 by shelling 20 kilometers into China. Approximately 60 Russians and 800 Chinese were killed in the conflict. So extensive was the Russian attack that Mao feared a Soviet invasion.

It was then that the USSR intended to drive home their offensive with a nuclear attack. Jung Chang and Jon Halliday, in their book Mao: The Unknown Story, allude to an article at the time published in a London newspaper “by a KGB-linked Russian journalist Victor Louis”, who had been Russian emissary to Taiwan, stating that the Kremlin was discussing bombing China’s nuclear test site, and planning to set up an “alterative leadership” for the Chinese Communist party.[4] Moreover it was U.S. President Richard Nixon’s aide John Haldeman who seems to have first broken the nuclear attack story in his memoirs in 1978.[5] He stated that for years the USSR had been trying to warn the USA not to allow China to become a nuclear power. This claim by Haldeman seems to directly contradict the claim by Liu that Nixon, when responding to the 1969 Soviet request for neutrality, did so not only because he regarded China as a means of containing Russia, but also because he was still “smarting from a Soviet refusal five years earlier to stage a joint attack on China’s nascent nuclear programme.”[6]

If we place this all into context, I believe that the 1978 Haldeman version is more likely than that of Liu’s present contention. If the USA had asked for support from the USSR to bomb China’s nuclear programme in 1964, this was a year following Sino-Russian border conflicts amounting to 4000 dead. In 1960, there had been 400 clashes; in 1962, 5000.[7] The USSR would have no sentimental, comradely, ideological, diplomatic, or geo-political reasons to oppose such a US proposal and then change her mind five years later and make a similar suggestion to the USA.

The relationship between China, the USA, and the USSR is quite contrary to how it is generally perceived. A more accurate scenario is that the USA backed Mao and the USSR backed Chiang Kai-shek. Stalin, prior to Mao’s assumption to power, regarded him as a Trotskyite. While Stalin had previously backed Mao as a counter to a Trotskyite coterie in China headed by Prof. Chen Tu-hsiu, Mao’s onetime mentor, by 1938,[8] Mao was being denounced in the USSR as a Trotskyite.[9]

During World War II, while the USA was pushing Chiang to make an alliance with Mao against the Japanese, Stalin was counselling Chiang against this.[10] Gen. George Marshall warned Chiang in 1946 at a crucial time that if he persisted in pursuing the beleaguered Red Army into Northern Manchuria, U.S. aid would stop. This provided Mao with a base from which to recuperate and finally defeat Chiang. On the other hand, Stalin’s aid to Mao was granted according to Russian interests as distinct from communist fraternity, one particularly dramatic example of which was the demand for repayment in food that resulted in 10,000 peasants dying of starvation in Yenan.[11] This was a prelude to the debilitating Sino-Soviet Treaty that was to result in the “Great Famine” for the same reason.[12]

Mao thought that he could make China a great power on Stalin’s coat tails. This was a grave error. While the USA attempted to court China, Mao went out of his way to act “Bolshie” towards the “Paper Tiger,” in a futile effort to court Stalin. Chang and Halliday write: “It was widely thought that it was the U.S. that refused to recognize Mao’s China. In fact, Mao went out of his way to make recognition impossible by engaging in overtly hostile acts.”[13]

In 1979, the year for the renewal of the 1950 “friendship treaty” between Russia and China, Mao gestured as to what he by then thought the fraternal relationship by invading Russia’s ally Vietnam, which was particularly significant in that in 1978 the USSR had entered into a 25 year defence treaty with Vietnam.[14]

Given the historically strained (at best) relationship between China and Russia, even at a time when they were supposed to be ideologically aligned, what are likely future scenarios on the world stage? There seems to be a preponderant view that the USA and China will increasingly become rivals due to economical and raw material factors. There is also a view that the USA and Russia will align against China. Again turning to an article in the Daily Telegraph, there is an interesting item from 2009. This refers to the Russian ethnic population decline in the Russian Far East, in comparison to the burgeoning Chinese population across the border, coupled with the tremendous mineral resources of the area. David Blair writes:

The endless silver birch forests of the Russian Far East might appear so desolate and windswept that no one could possibly be interested in them. Yet the vast swath of territory between Lake Baikal and Vladivostok may become a new theatre of confrontation between Russia and China in the decades ahead.

For now, the two giant neighbours have been thrust together by their shared suspicion of America and they cooperate as tactical allies, working in the United Nations Security Council to contain Washington’s power. But this affinity is based on little more than having the same rival. The empty lands of the Russian Far East, far closer to Beijing than Moscow, contain major sources of tension between the two powers.