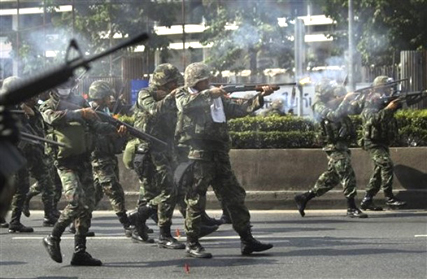 Who? At least 29 people have been killed and more than 200 others wounded in fresh unrest.

What? Thai military opened live fire at hundreds of supporters of the anti-government opposition.

Where? The fatalities took place in several business districts in Bangkok, Thailand, where Red-shirt protesters have barricaded themselves.

When? The clashes intensified on Friday and Saturday when more than 25 protesters lost their lives.

Why? The opposition is demanding the resignation of the British-born, Oxford-educated Abhisit Vejjajiva, who they accuse of colluding with Thailand’s royalist elite and meddling with the judiciary to bring down previous elected governments.

How? Thai armed forces and their sharp shooters started shooting at the protesters in their bid to end the stand-off and clear the area.