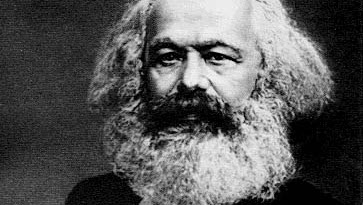 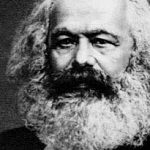 Marxism is widely known as including as a primary ideological premise the concept of dialectics, or “dialectical materialism” as the Marxists term their variation of the Hegelian theory. The Marxian dialectic is outlined in The Communist Manifesto; history is described as a progression of economic struggle for class primacy that goes through phases including those of primitive communism, feudalism, capitalism, socialism and ultimately communism.[2] Capitalism thus is an essential phase in the Marxist dialectic of historical progression towards communism. Where capitalism does not at first exist, this is seen as a hindrance rather than as a benefit to the development of socialism. The Marxist premise was that socialism must proceed from a capitalist economy.

National differences and antagonisms between peoples are daily more and more vanishing, owing to the development of the bourgeoisie, to freedom of commerce, to the world market, to uniformity in the modern of production and in the conditions of life corresponding thereto. The supremacy of the proletariat will cause them to vanish faster.[3]

Generally speaking, the protectionist system today is conservative, whereas the Free Trade system has a destructive effect. It destroys the former nationalities, and renders the contrasts between workers and middle class more acute. In a word, the Free Trade system is precipitating the social revolution. And only in this revolutionary sense do I vote for Free Trade.[4]

In Marx’s own day, he saw the then dominant and newly emerging Free Trade School as part of a necessary dialectical process of history that makes more acute the antagonism between the classes, internationalizes the proletariat and indeed as “precipitating the social revolution.”

Lenin instituted the New Economic Policy for the purpose of bringing Russia, hitherto still undeveloped industrially, into the stage of industrial development required as the prerequisite for building socialism, and opened the new Soviet state to foreign capital.[5] Today, the Chinese leadership can rationalize capitalist economic innovations on the basis that China must first develop a certain economic phase before proceeding to a fuller socialist economy. Vietnam at the moment, after having spent much of its history fighting for sovereignty against foreign domination, whether it be that of ancient China, or colonial France, or the American presence, now succumbs to the global economic development model and has entered the world economy, subjecting herself to World Bank and International Monetary Fund “guidance” and “advice”, and having 42% of its GDP serving debt, which the World Bank assures us is an acceptable debt level.[6] Here again Vietnam’s leadership is within the Marxian dialectical framework of building its economy through capitalist structures and debt as a prelude to socialism and ultimately to communism, assuming that a state once becoming part of the international financial structure can ever remove itself.

What is not generally recognized is that capitalism also has a dialectical approach to history. In this dialectical capitalism, the synthesis that is supposed to emerge is a “Brave New World” centralized world economy controlled not by commissars and a politburo but by technocrats and boards of directors. A strategy of dialectics means backing movements in the short term to achieve quite different, even opposite goals, in the long term. Hence the rationale behind capitalists supporting socialist and even communist movements, as will be shown. As stated above H. G. Wells opined—approvingly—at the time of the Bolshevik Revolution that Big Business and communism are both paths to the same end—”Collectivism.” The “socialistic” orientation of certain capitalists at the apex of the world economy is exemplified by a statement by the late Nelson Rockefeller of the famous capitalist dynasty: “I’m a great believer in planning. Economic, social, political, military, total world planning.”[7]

In terms of having backed socialism and other forms of social revolution or revolt, the dialectics of capitalism considers that a capitalist society cannot be achieved until a rural or economically anachronistic society has gone from its peasant stage into an industrial phase. In order to achieve this sudden and enforced industrialization of a peasant or rural society, certain capitalist interests have used socialism.

History has shown that the capitalist dialectic has been successful: certain business interests backed or at least welcomed socialist revolutions in Russia and China to overthrow traditional peasant societies. Once socialism had been used to achieve the industrialization of those societies, the next phase of the dialectic has been to introduce privatization and globalization to the economies of the former Eastern bloc; the present phase of the dialectic, while China’s economy seems to be proceeding along desired paths as part of the world economic system.

This theory is not as fanciful as might at first be assumed, when one considers that Marxist academics have long taught that fascism is part of a capitalist dialectic, having described fascism as nothing more than the “last defense of capitalism.”[8] The capitalist dialectic I am proposing here is somewhat similar; except that it is socialism, including Marxism, that has been the focus of a capitalist dialectic, and this dialectic is more readily observable in practice than the largely theoretical Marxist interpretation of a fascist-capitalist dialectic. The contention here is that socialism and other revolutionary movements have been used as a means of subverting traditional religious, rural societies to bring them suddenly and forcefully into a modern economy from which capitalism can proceed. Marxism has in such instances served capitalism in destroying not only those institutions that are obstacles to the development of the capitalism, but also the attitudes that plutocrats and technocrats regard as anachronisms and obstacles to the formation of a production and consumption mass society. In short, socialism has been a means of destroying what capitalism regards as anachronistic.

Is there any evidence for such a dialectical outlook serving as the basis for corporate planners? I believe there is, and it has been particularly cogently expressed by a then up-and-coming young academic named Zbigniew Brzezinksi, who was to carve a name for himself in the highest echelons of political administration and within international business think tanks.

Brzezinski, who served as President Carter’s National Security adviser, and is a foreign policy adviser to President Obama, has been the North American director of the Rockefeller think tank the Trilateral Commission,[9] is a member of the Council on Foreign Relations,[10] and a participant at the international conferences of The Bilderberg Group, wrote his Between Two Ages as a dialectical treatise on the process of internationalization, or globalization as it is now called. While he sees Marxian dialectics as too simplistic his own approach is nonetheless dialectical. Brzezniski considers – approvingly – the technocratic age as progressively destroying the nation-state and undermining traditional loyalties, out of which a global oligarchy would emerge. He wrote:

Today we are again witnessing the emergence of transnational elites, but now they are composed of international businessmen, scholars, professional men, and public officials. The ties of these new elites cut across national boundaries, their perspectives are not confined by national traditions, and their interests are more functional than national. These global communities are gaining in strength and as was true in the Middle Ages, it is likely that before long the social elites of most of the more advanced countries will be highly internationalist or globalist in spirit and outlook.[11]