Body Conditioning and Hardening for Fighters 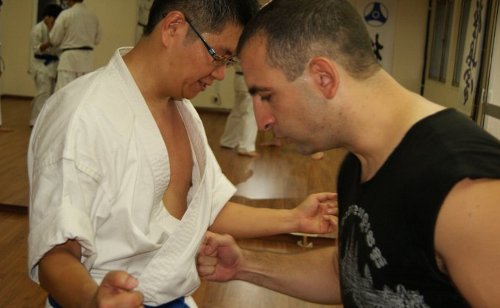 Shihan Mike told us to put a pad into our belt, which would partially soften the blows to the abdomen. When he said “start” my partner started punching me in the stomach with his bare hands. He didn’t stop until the signal was given, two minutes later. My partner, a huge Cantonese guy, about 22 years old, was hitting me so hard that it was pushing me backward. I kept seeing images of my internal organs rupturing and bleeding.

“This is how Houdini died,” I reminded him. But he just kept on pounding, till Shihan said stop.

Now it was my turn, and I pummeled the Cantonese guy for all I was worth. My force also knocked him backwards, but like me, like everyone in the room, he just took it. He stood his ground and never asked me to slow down or to stop. 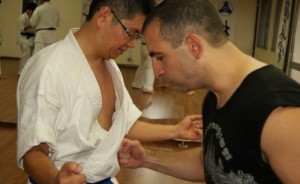 This exercise was just one of many Kyokushin body conditioning exercises, designed to prepare the fighters for the Kumite or fighting competition.

It was painful, but ever since seeing the movie “Blood Sport” as a kid, I have been dying to participate in an event called The Kumite. And if internet debunkers are right, Frank Dux would also like an opportunity to compete in such an event.

Monday to Friday I train in Silat Kalam and in Muay Thai. My training day goes form 4:00 pm till 10:00 pm. At 10:00 pm, I start teaching sparring class at the Muay Thai gym. Sundays are the only day I am free to attend Kyokushin and it is always a struggle to get myself out of bed and out of the house. This particular Sunday was problematic because I had had diarrhea all day. It is a gross reality of training in Asia. You will periodically get stomach problems. And it is your choice to train through them or just baby yourself. But they happen so frequently, if you cancelled training every time you spent more than an hour on the toilet, you wouldn’t get much training done at all.

I am human, so, needless to say, I almost cancelled training. But I pushed through and I went. Shihan Michael was away, fighting in Japan, so another teacher was taking the class. The class was physically very easy, mostly katas and no kicks or sparring or conditioning. I felt slightly cheated, but honestly, I was in no shape to do a full work out. My friend Chris said to me, “You look completely white,” and gave me some re-hydration packets.

After class, Chris and I did a little conditioning. Since beginning Kyokushin, I have now added the thigh conditioning to my Muay Thai training for my self and my students. We just stand in a Muay Thai stance and let the opponent kick our thighs, inside ten times, outside ten times, on each thigh. Then you kick him. Then he kicks you. Chris told me they also condition their forearms so they can block kicks. The conditioning was the same as Wing Chun or what the Vovinam teacher did to me in Vietnam. Two men stand facing each other, and swing their bodies, knocking their forearms together. Whap! Whap! Bone against bone. It hurts so much.

In addition to believing that Kyokushin body hardening or conditioning should be part of a fighter’s daily routine, I also like this training because it is not cardio intensive. For example, yesterday I was ill and not able to do lots of rounds on the pads or the bag. But I was well enough to stand still and let someone pound on my body.

In Kyokushin we also do rounds where you stand and let a man pound on your stomach with bare hands, but I skipped these on my diarrhea days.

In teaching Muay Thai to beginners, or “normal people”, one issue is that they only have so much cardio fitness. For normal people, a two hour training sessions is like running a marathon. And I can’t ask them to do more cardio work outside of class because they have full time jobs and school. So, all of their training has to be in that narrow window when they come to class. If I see they are dying, I want to give them a break. But if I give them too many breaks, they will feel I cheated them out of their training time. So, switching from cardio and pad work to conditioning is a low intensity way to make them feel they are still training, but without making more demands on their depleted energy reserves. Also, as the conditioning requires two partners to hit each other, one is getting a lesson in taking hits, and one is getting a lesson in delivering them. When you train normal people you have to teach them to hit as well as get hit.

With other martial arts, apart from Kyokushin, they condition forearms and knuckles and other parts of the body. And I have always laughed at them. Why do they do it? They are so proud of how much conditioning they do, and are always quick to tell me that no boxer or Muay Thai could handle even one session of conditioning. But then when we fight, it becomes apparent that they can’t beat even a novice boxer or Muay Thai. So, I always feel they are enduring all of that pain for nothing.

For example: Why did the Tae Kwan Do guys I trained with in Taiwan take so much pride in conditioning their knuckles. Yes, their knuckles were much harder than mine, but then none of them knew how to throw a punch. In fact, their martial art doesn’t even allow punches. And Vo Co Tryuen guys in Vietnam were banging their forearms on a metal flagpole for conditioning, so they could block kicks. But in their art, they never actually fight. How hard do your forearms have to be to do demonstration forms? Many of the martial artists I trained with stressed the importance of running, to build cardio. But their fights, in addition to not being full contact, lasted less than a minute or certainly less than a round. So, how much cardio did they need?

A boxing fight is a minimum of three three-minute rounds. Muay Thai is five two-minute rounds. You need cardio for that. In both sports you throw heavy punches. And yet, we don’t condition our hands. The only part of the body Muay Thai fighters condition is their shins. The rest happens naturally. The VoVinam guys in Ho Chi Minh City were telling me how weak Muay Thai was because of this lack of body hardening. They were also amazed that I couldn’t do a flip or a hand spring, “But you said you are a fighter,” they remarked in complete disbelief. Obviously, it wouldn’t even have been fair for me to fight one of those guys because they had no clue about fighting.

Kyokushin body conditioning makes sense. And if you doubt them, they would be happy to get in a ring with you, instantly, and show you whether their system works. Boxers and Muay Thai do between zero and very little body conditioning, but it also works. The only answer I can come up with is that maybe intentional body conditioning is overkill. Perhaps the constant sparring, pad work and fighting is enough to condition a boxer or a Muay Thai. I would imagine, although we haven’t tested it out, I could take more shots to the face or head than most of my Kyokushin friends. But I never conditioned my head or face, it just happened naturally over a lifetime of fighting.

Maybe Kyokushin body conditioning speeds up the natural process. At the end of two years or four years of that constant battering, the Kyokushin fighter achieves pain thresholds that take a lifetime to develop in other sports. Or, maybe it is just better. No matter what, they are obviously doing something right in Kyokushin, because they can fight and beat nearly any other Traditional Martial Art (TMA) and are the only TMA I know of that could get in the ring and spar with Muay Thai and be fine.

If my best Kyokushin friend wanted to come to my Muay Thai gym, I would need to teach him combination punches, and how to go to the head. But I wouldn’t change much of anything about his kicks or blocks. One big change for him would be going from a single two-minute round in Kyokushin to five two-minute rounds in Muay Thai. But, I feel confident he could spar the first day, and hopefully learn to fight in about a month or two. But if the best Tae Kwan Do or VoVinam guy wanted to learn Muay Thai, it would be a long painful road. They would have the flexibility and athleticism but they wouldn’t have the punches or the fighting. They also wouldn’t have the threshold of pain necessary to fight.

Adding Kyokushin type body conditioning to a fighter’s regime makes sense to me. Everywhere I go, and every art I train, I try and find something I can take back to the Muay Thai or Bokator gym.