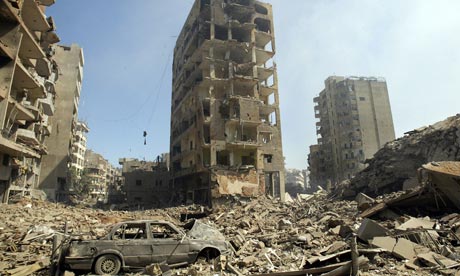 On a clear day you can see Akka, Palestine from my favorite Lebanese village, Maron al Ras, where more than a few analysts here conjecture that the next and 6th aggression by Israel against Lebanon will begin. 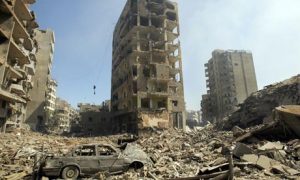 They frequently glare from widows heavily screened to keep out stones that tourists on the Lebanon side of the ‘blue line’ regularly throw at them when UNIFIL guys aren’t paying attention and don’t shoo them away. You can also see landmine fields, wide soft sand swatches along the wire fences to detect trespassing neighbors’ footprints, a couple of orchards, and the edges of three colonial settlements. And if one were to squint, like really squint, or better yet, risk getting shot between the eyes by a Zionist sniper with an American 7.62 mm, Sniper Weapon System, M24 (called a “system” because it can be used with various detachable telescopic sights and other accessories) and were to use some Barska Cosmos 25X100 binoculars, one might see, well, vent holes.

These air ducts, according to imaginative and joking village kids, are guarded by specially trained scorpions; the holes bringing in fresh air for scores of 130 feet plus bunkers that some miscreants are rumored to have gone and built all over northern Palestine as far south as Safad.

The increase in activity along the Blue line, especially near Fatima’s Gate is only partially in preparation for the rumored visit of Iran’s President Mahmoud Ahmadinejad in mid-October. An Israeli invasion could be launched at any time and locals explain that, for their part, they have selected their targets, completed their surveillance, so far eluded capture, and are ready to attack deep into Palestine when commanded.

President Ahmadinejad is also expected to appear and speak at Maron al Ras, presumably without binoculars and resisting the temptation to cast a few stones in solidarity with the Palestinian intifadas. UNIFIL personnel at the scene reveal that several Israeli military leaders have been visiting the area this past month, including Chief of Staff Gabi Ashkenazi.

It is here in this ancient verdant, war-scared hillside village of Maron al Ras where tradition instructs that Jesus (Issa) from Nazareth, less than a day’s walk to the South, accompanying his sainted mother Mary (Miriam), paused to rest on their trek to a wedding feast at Qana, some 30 km west.

At Qana, the site of unspeakable massacres in 1996 and 2006, two of the more than 60 committed by Zionist forces over the past six decades, the bearded Palestinian “terrorist”, so-listed by the Sanhedrin judges, performed at his mother’s request his first miracle. Qana residents are quick to point out that it was this same Sanhedrin that would later pay Judas Iscariot 30 pieces of silver to deliver up Jesus for trial on false death penalty charges of Blasphemy and would sentence his brother James to death by stoning.* According to a local priest who conducts tours of the Grotto of the Virgin Mary in Qana, where Mary and her son visited with the family of the soon-to-be newlyweds, “By turning water into wine, Jesus dutifully fulfilled his mother Mary’s request to provide additional refreshment for the larger than expected gathering of nearby villagers.” The priest explains to visitors that the parents of the bride and groom wanted to avoid the acute social embarrassment of running out of refreshments and were concerned for the comfort of last minute uninvited guests, who they anticipated would arrive for their children’s wedding as word quickly spread that Jesus and his mother would be attending.

One guest who is receiving invitations even from March 14 pro-Saudi political parties for frank discussions this month and who has already been invited to Qana, but who probably won’t imbibe the local “miracle wine” sold by local entrepreneurs, from under the tent so to speak, will be the President of the Islamic Republic of Iran, Mahmoud Ahmadinejad. He is said to be a devotee of Prophet Issa and Miriam, both venerated in the Holy Qur’an.

In Lebanon, it sometimes appears even to the “particularly obtuse” — to borrow a phrase from my favorite constitutional law professor and scholar, Henry Paul Monaghan, who sometimes called us first year law students “particularly obtuse” — that everything is viewed through the smoky prism of local politics and sects. Two lovely and politically passionate Qana villagers (one giggling and claiming to be a “Shia-Christian” and her friend interjecting “I’m a Christian-Shia!”), both Muslims who follow the teachings of “Prophet Issa”, explained to this foreigner that while many Rabbis disparage Jesus’ miracle in Qana by claiming that it was the Hebrew Moses who was first able to turn water into another substance. They then gleefully counter that “Moses may well have done, but Moses turned water into blood as a message of harsh judgment and violence, whereas ‘”our'” Palestinian Issa turned water into wine as a message of love, generosity and hospitality.” The discussion ended when an American Yeshiva student from Brooklyn appeared and entered the discussion announcing to the villagers that both Bible stories “suck” and that that when the next war comes Qana may witness itself being miraculously turned into depleted uranium dust.

In both Maron al Ras and Qana, villagers believe it’s just a matter of time before Israel will invade Lebanon, and it’s a subject of rare unanimous sectarian consensus in all of Lebanon. For example, in the course of no more than two hours the other day, while running errands around Beirut, this observer was informed, without even bringing up the subject, by (1) my Shia Muslim Hezbollah motorcycle mechanic patching up my bike after a slight mishap (again!) (2) Miss Idriss, the Maronite Christian lady who works at the corner bank and who truly adores “al Hakim” Samir Geagea, leader of the Lebanese Forces (since 2006, Geagea and the LF has been siphoning off alienated cadres and youth from the ranks of Geagea’s rivals including the Gemayals’ Phalange and Michel Aoun’s Christian pro-Hezbollah Free Patriotic Movement, and (3) my Sunni Muslim greengrocer lady who has absolutely no use for any of the above, that a major war is coming and probably sooner rather than later.

Purveyors of Israeli Hasbara are also keeping busy with predictions of a World War I-type inevitability of major war in Lebanon, given the claimed rapid arming of the national Lebanese resistance led by Hezbollah, and the Israeli touted collection of yet more new ‘ultra-tech super weapons’ including robotic insects, new stealth drones, Iron Domes, David Sling I and II missile shields, and yet even more improvements to the “impenetrable” Merkava Mark IV tank that took such a beating in 2006 that three countries, including Belgium, cancelled Merkava purchase orders. Israel and its “academic agents” tout more than 20 other spectacular “game changing” technological breakthroughs just since the 2006 war, which, according to Anthony Cordesman of the Center for Strategic & International Studies and Jane’s Defense Weekly, likely will not function in real war conditions — despite the largess of the unknowing American taxpayers who pick up the tab for their R & D.