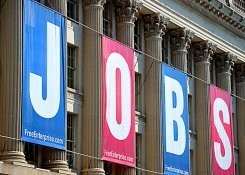 For a number of years I reported on the monthly nonfarm payroll jobs data.  The data did not support the praises economists were singing to the “New Economy.”  The “New Economy” consisted, allegedly, of financial services, innovation, and high-tech services.

This economy was taking the place of the old “dirty fingernail” economy of industry and manufacturing. Education would retrain the workforce, and we would move on to a higher level of prosperity.

Time after time I reported that there was no sign of the “New Economy” jobs, but that the old economy jobs were disappearing.  The only net new jobs were in lowly paid domestic services such as waitresses and bartenders, retail clerks, health care and social assistance (mainly ambulatory health care services), and, before the bubble burst, construction.

The facts, issued monthly by the US Bureau of Labor Statistics, had no impact on the ”New Economy” propaganda. Economists continued to wax eloquently about how globalism was a boon for our future.

The millions of unemployed today are blamed on the popped real estate bubble and the subprime derivative financial crisis.  However, the US economy has been losing jobs for a decade. As manufacturing, information technology, software engineering, research, development, and tradable professional services have been moved offshore, the American middle class has shriveled. The ladders of upward mobility that made American an “opportunity society” have been dismantled.

The wage and salary cost savings obtained by giving Americans’ jobs to Chinese and Indians have enriched corporate CEOs, shareholders, and Wall Street at the expense of the middle class and America’s consumer economy.

The loss of middle class jobs and incomes was covered up for years by the expansion of consumer debt to substitute for the lack of income growth. Americans refinanced their homes and spent the equity, and they maxed out their credit cards.

Consumer debt expansion has run its course, and there is no possibility of continuing to drive the economy with additions to consumer debt.

Economists and policymakers continue to ignore the fact that all employment in tradable goods and services can be moved offshore (or filled by foreigners brought in on H-1b and L-1 visas). The only replacement jobs are in nontradable domestic services, that is, those jobs that require “hands-on” activity, such as ambulatory health services, barbers, cleaning services, waitresses and bartenders–jobs that describe the labor force of a third world country. Even many of these jobs are now filed with foreigners brought in on R-1 type visas from Russia, Ukraine, Thailand, Romania, and elsewhere.

The loss of American jobs and the compression of consumer income by low wages has removed consumer demand as the driving force of the economy.  This is the reason expansionary monetary and fiscal policies are having no effect.

The latest jobs report issued today shows that America’s transformation into a third world economy continues.  The economy lost 95,000 jobs in September, mainly due to cuts in local education and federal employment. Part of the loss of 159,000 government jobs was offset by 64,000 new private sector jobs.

Where are the new jobs?  They are in nontradable lowly paid domestic services: 32,000 were in health care and social services, and 33,900 were in food services and drinking places.

There you have it.  That is America’s “New Economy.”