The Symbiosis Between Anti-Semitism & Zionism 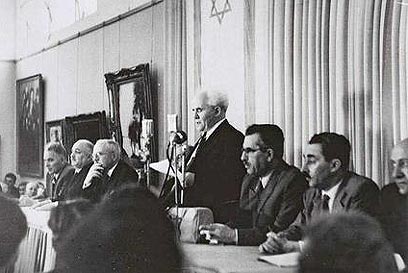 David Ben Gurion declares the establishment of the state of Israel on May 14, 1948.

The raison d’etre for the establishment of the modern Zionist movement is that anti-Semitism is a pervasive and untreatable condition among Gentiles. When anti-Semitism is not overt and violent, it is latent and awaiting the right conditions to manifest as pogroms, according to Zionist dogma. Therefore the only ways Jews can escape this inherent anti-Semitism is by: (1) establishing a Jewish homeland, and (2) by total Jewish commitment to Zionism in whatever part of the world one resides. Zionist dogma further states that assimilation of Jews does not work; that ultimately even assimilated Jews will become victims of Gentile anti-Semitism. 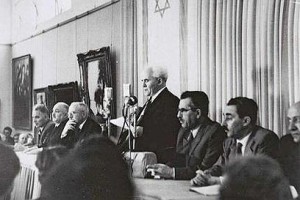 David Ben Gurion declares the establishment of the state of Israel on May 14, 1948.

The doctrine arose during the latter part of the 19th Century in response to the widespread assimilation of Jews into Gentile society. It was feared by some that assimilation would destroy the Jewish identity. Whereas in past centuries, prior to the “emancipation” wrought by the French Revolution, Jews had been separated by the ghetto, modern society was breaking down the barriers. Jews were becoming “liberal” and “progressive.”

Yet even during the Middle Ages, “Jewish blood was intermingling with Christian blood. Cases of wholesale conversions were exceedingly numerous…,” wrote the prominent French Jewish writer and onetime Zionist, Bernard Lazare.[1] He stated in this regard that “the entire history” of Jewry proves their assimilability; that “the Jew no longer lives apart, but shares in the common life…”[2] And there was the real problem.

It so happens that Lazare wrote his book on anti-Semitism the very year of the “Dreyfus Affair.” At the time, the Austrian journalist Theodor Herzl was in France observing the consequences of the allegation against the French-Jewish officer who was accused of spying for Germany, and which brought France to the verge of civil war. Herzl used the “Affair” as justification for his separatism ideology, claiming that if anti-Semitism could ignite so quickly in a nation as liberal and egalitarian as France, then assimilation was a myth, and anti-Semitism a constant that could not be eradicated. The only option was a return to Jewish separatism, the self-ghettoization of the pre-Emancipation era.

However, it is unlikely that Dreyfus was the real cause of Herzl’s own separatism. If Dreyfus became a cause celebre for French anti-Semites, so it was also for the multitudes of Frenchmen who came to the defense of the Jews, and Dreyfus was ultimately pardoned. The anti-Zionist rabbi Elmer Berger, who founded the American Council for Judaism, wrote of this:

Where in all the world a century before would more than half a nation have come to the defence of a Jew? Had Herzl possessed a knowledge of history, he would have seen in the Dreyfus case a brilliant, heartening proof of the success of emancipation.[3]

Conversely, Herzl aligned himself with the anti-Semites, and found an ally in the leading French anti-Semite and campaigner against Dreyfus, M Drumont.

Herzl, while not the first Zionist, was the first to establish Zionism as an enduring and successful political movement. In response to the Dreyfus Affair he wrote the modern Zionist manifesto, The Jewish State.

Many Jews, including the most influential, had assimilated and were suspicious of any movement that would again make Jews conspicuous as a separate people. The American statesman Henry Morgenthau Sr. for example said: “I refuse to allow myself to be a Zionist. I am an American.” If this assimilationist attitude was to be replaced by a revival of Jewish separatism, anti-Semitism would have to be welcomed, even promoted, by Zionism as confirming its dogma and reversing the process of assimilation.

Zionists from the beginning welcomed anti-Semitism as a means of undermining what Zionists believed was the sense of false security of Jews in western, liberal societies, and as the means by which Jews would be kept in a permanent state of neurosis.   Organizations such as the Anti-Defamation League of B’Nai B’rith exist mainly for the purpose of exaggerating the extent of anti-Semitism in order to keep Jews under the Zionist heel and keep the coffers for Israeli causes filled.

Theodor Herzl (1860-1904), the founder of modern Zionism, recognised that anti-Semitism would further his cause, the creation of a separate state for Jews. To solve the Jewish Question, he maintained “we must, above all, make it an international political issue.”

Herzl wrote that Zionism offered the world a welcome “final solution of the Jewish question.” In his Diaries, page 19, Herzl stated:

“Anti-Semites will become our surest friends, anti-Semitic countries our allies.”

Zionist reliance on Anti-Semitism to further their goals continues to this day. Studies of immigration records reflect increased immigration to the Zionist state during times of increased anti-Semitism. Without a continued inflow of Jewish immigrants to the state of “Israel,” it is estimated that within a decade the Jewish population of the Zionist state will become the minority.

In order to maintain a Jewish majority in the state of “Israel,” its leaders promote anti-Semitism throughout the world to “encourage” Jews to leave their homelands and seek “refuge.”

On November 17, 2003 Zionist leader, Ariel Sharon, the Israeli prime minister, told Jews in Italy the best way to escape “a great wave of anti-Semitism” is to move and settle in the state of Israel. This has been the Zionist ideology from the beginning to the present time. “The best solution to anti-Semitism is immigration to Israel. It is the only place on Earth where Jews can live as Jews,” he said.

On July 18, 2004, Israeli Prime Minister Ariel Sharon urged all French Jews to move to Israel immediately to escape anti-Semitism. He told a meeting of the American Jewish Association in Jerusalem that Jews around the world should relocate to Israel as early as possible. But for those living in France, he added, moving was a “must” because of rising violence against Jews there. “