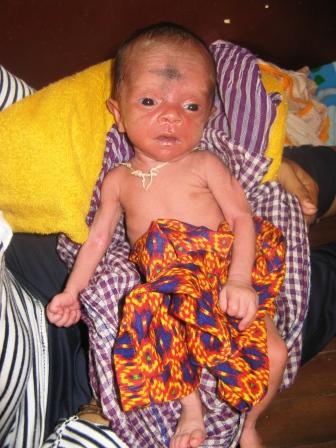 Ann Marie is not the most traditional Khmer name a Cambodian girl can be christened with. Her bulging eyes and a black mark on her forehead the size of a human thumb print are signs of the burden she is carrying. This fragile baby who weighed 1.6 kilograms (3.5 pounds) at birth on March 23 has already experienced more trauma in her short lifetime than so many of us would experience in half of our statistically predicted average life expectancy.

Twenty days after Ann Marie was born, her mother passed away from AIDS-related complications. There is a high probability that Ann Marie is HIV positive. It is hoped that she has relatives who may come to visit her one day, but this is not a certainty because none of her relatives know where she is. 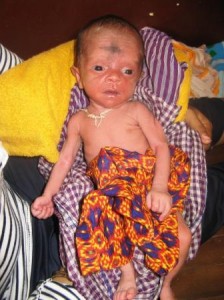 Now baby Ann Marie has a new home and an extended family to watch over her.

Wayne Matthysse is co-founder of Partners in Compassion, a communal home for residents infected with or affected by HIV/AIDS. He is under no illusions about the situation that he is dealing with. “We do not get the perfect children, just the rejected ones. But when you are in the kind of business we are in, you take whatever comes.”

Statistics tell conflicting stories on the approach to the situation of AIDS in Cambodia. The British-based charity AVERT declares on its website that Cambodia has Asia’s second highest AIDS prevalence rating. In a report released by UNAIDS in March that focused on Cambodia’s progress, the country’s National AIDS Authority shows that between 3638 children between the ages of 0-14 years received Anti-Retro Treatment, an increase of 18.6% compared to 2008, and 237.2% since 2005. While no new data is presented since the previous report in 2007, it reiterates that 8.8% of children aged between 0-17 years are recorded as orphans (one or both parents dead) and 6.1% of children aged between 0-17 years have a chronically ill parent.

For all the numbers and indicators, it does not answer how this affects the quality of life and care that baby Ann Marie will encounter.

Mr. Matthysse spoke about how Ann Marie became the newest resident of Partners in Compassion in Sramouch He village. Situated two hours from the Cambodian capital city of Phnom Penh, this is home for adults and children whose lives have been affected by HIV/AIDS, either through contracting the illness or having no other family capable of caring for them.

“The day Ann Marie’s mother died, Vandin San (who runs Partner in Compassion Home Care) rang me and asked if I would accept her.” With one phone call, Ann Marie was literally “dropped like a hot potato” on the doorstop; no forms and no bureaucracy to contend with.

In October 2008, while living in the nearby village of Tropang Sdok, I made a visit to Partners in Compassion to see how residents lived and the small scale business projects in animal husbandry, sewing, and community building. At the time, plans were being made to construct extra classrooms along with further restoration of the adjoining Wat Opot. At that time, 65 residents, of which less than half were identified as being HIV positive, resided on the grounds of Partners in Compassion. From that visit, two aspects stood out: Chhang’s Place, a crematorium named after one of the former child residents who passed away, and the level of responsibility undertaken by children in the burial process. They seemed remarkably mature for their age and cope with loss in a dignified manner.

There is no question about the amount of love that will be afforded to Ann Marie by Partners in Compassion’s extensive family. Inhabitants love their newest addition to the family like their sibling or daughter. Donors have provided consignments of baby clothes. With three trained nurses (including Matthysse, a qualified medic), there is no shortage of attention and expertise. The day after Ann Marie’s arrival, Jurgen Reichl, a Male Paediatric Intensive Care Nurse from Switzerland, arrived at Partners in Compassion and decided to stay for a few weeks. Together, the parenting skills and available medical resources give Ann Marie a fighting chance at living a full life.

Since her arrival, Mr. Matthysse says that Ann Marie’s condition has improved greatly and her weight has increased to 1.8 kg. “She is feeding well and is gaining more strength color,” he says. Once health services resume after the break, Ann Marie will be taken to the nearby town of Takeo to be registered in the HIV program. Mr. Matthysse is determined to provide the baby with the same opportunities that every other child, teenager and resident has had to make the most of life. “I am well aware of the fact that I will most likely not be around to see her graduate from high school,” says the 63 year-old. “So I must work even harder to assure that there will still be a program for her 18 years from now.”

This does not just represent Mr. Matthysse’s future vision, but one that is already in place. Current students benefit most from opportunities to shine, like Pesai, a high school student who has grand visions of becoming a professional artist. Several years ago, Pesai, his sister Srey Lak and mother entered the grounds following their father’s death from AIDS. Matthysse told me their while their mother was taking Anti Retro Viral (ARV) drugs and showed signs of improvement, she later broke her hip, developed ulcers on both buttocks, and never recovered. She died with her two children at her bedside.

“After the cremation, Pesai came to me and asked, ‘I don’t feel sad that she died. Is that wrong?’” says Mr. Matthysse. “I assured him that there was nothing wrong with feeling that way and that in time he would be able to remember the good times again.”

Pesai’s inquisitiveness about his own nature and that of others has influenced his art, dealing with what Mr. Matthysse calls the two sides of personality: what we show and hide—traits reflected in Pesai’s depiction of Angkor. Mr. Matthysse believes that Pesai will not only become a wonderful artist, but more importantly, “a great leader”.

Maybe someday, when Ann Marie is older, she will find her own unique style in which to express her gratitude and approach to life, in an environment where everyone is beautiful.

You can find out more about Partners in Compassion by visiting their website: