Testing the Limits of Freedom of Speech: Ernst Zundel Speaks Out 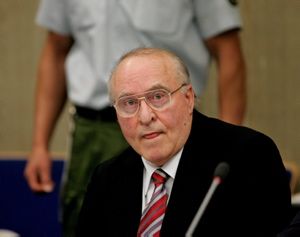 Ernst Zundel in a courtroom in Mannheim, Germany on November 8, 2005 (Michael Probst/AP)

Ernst Zundel is a German author and historian who has spent seven years of his life behind bars as a result of expressing his controversial viewpoints and opinions. He is a revisionist who has denied the Holocaust as described by most historians. He has been one of the most prominent political prisoners in Europe and has been jailed in three countries on two continents.

After his arrest in the U.S. in 2003, he was deported to Canada, where he was kept in prison as “a threat to the national security” for two years. After deportation to Germany in March 2005, he was convicted and sentenced in 2007 to five additional years of imprisonment on charges of holocaust denial.  He was finally released on March 1, 2010.

This is the first interview Ernst Zundel has given since his release.

Firstly, I would like to extend my congratulations on your recent release. Were you ever mistreated or subject to any type of mental or physical punishment in breach of international conventions?

Ernst Zundel in a courtroom in Mannheim, Germany on November 8, 2005 (Michael Probst/AP)

My entire treatment these past seven years by those arresting me, trying and convicting me, and keeping me in prison has been in brutal breach of international conventions.  I was arrested in broad daylight on American soil by officials of the U.S. government who acted as hit squads for a nefarious lobby. There was no arrest warrant. I was not read my rights. I was whisked away in handcuffs without being allowed to get my wallet, to call my attorney, to be allowed to make my case before an American Immigration Judge or even hug my wife goodbye.

I was incarcerated in six different prisons on two continents in three countries—the USA, Canada, and Germany—without relief of any kind. In effect, I have had 10 percent of my life stolen from me – and for what “crime”? For having “overstayed my U.S. visa”?

Throughout my imprisonment, basic human rights principles were trampled underfoot repeatedly and with impunity. The worst prisons were the Canadian detention centers at Thorold, Ontario and at Toronto West, where I was held for two long years in isolation cells, ice-cold in the winter, no shoes or socks allowed. The electric light in these cells, bright enough to be able to read, was kept on 24 hours a day. Through a glass slot in the door I was checked every 20 minutes, and my activities were meticulously noted by the guards: one sheet for every day.  No dignity, no privacy. My toothbrush was kept in a plastic bin in a hall. I was not allowed to speak to other prisoners. Bed sheets were changed only after three months. No pillows. No chairs. When I wrote to my wife or to my attorneys, I had to sit on a makeshift pile of my court transcripts. No radio, no television, not even an electrical outlet to sharpen my pencils. No ball point pens, only pencil stubs, cut in half with a saw. No spoons, forks, or knives were permitted; only a white plastic spoon with a fork called a “spork” that had to be returned every time at the end of the meal. With very few exceptions when furtive guards showed me some kindness away from the surveillance cameras, I was treated as though I was the worst of criminals. That’s Canada for you, where I have lived and worked without a criminal record for more than 40 years.

It was somewhat better, but not much, in the United States. In Germany, it was quite a bit better in terms of the basic necessities, but personal mail was routinely withheld – 1,700 letters for up to five years – even after I forced a court to order that it be given to me. My so-called trial in Mannheim was a political show trial in the Stalinist mode in that my guilt was a foregone conclusion. I requested that exculpatory exhibits be allowed as validation for what I believed and had written and said. No meaningful defense was allowed. I could not put on record any forensic evidence, any historical documents, or even expert witnesses, That very request to be allowed to offer evidence was held to be a new offense of criminal behavior and could have resulted in new criminal charges – as were, in fact, lodged against my lawyers during that very trial who tried to overcome these restrictions.