Is Karzai Heading For The End Game? 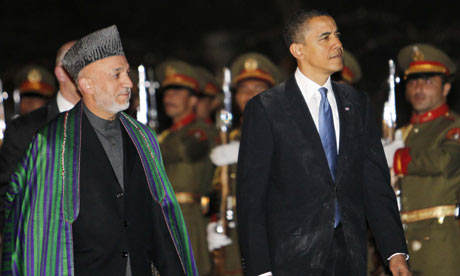 During the last few weeks a barrage of criticism for the West, NATO, and the United Nations has poured out of Kabul. The man roaring in anger and giving vent to his frustration was none other than the darling of the West until about a year ago – Mr. Hamid Karzai.

Clad in somber green robe, perhaps to project an aura of piety, Karzai hobnobbed with his American masters for eight years, basking in the position that fell upon him like manna from heaven, thanks to another holy man called Bush, who confided his shocking biblical prophecy to President Chirac that God wants to “erase” Mid-East enemies before a New Age begins. The same year, Bush reportedly told the Palestinian foreign minister that he was on “a mission from God” in launching the invasions of Iraq and Afghanistan and was receiving commands from the Lord. 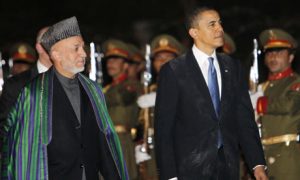 But the situation changed with Obama coming in. Instead of Bush-like pampering phone calls, embarrassing questions and expressions of displeasure poured in from Obama about rampant corruption and mismanagement in his government and his brother’s drug trade.

The matters came to a head during presidential elections last August, which he won, but not without a massive vote fraud that embarrassed the West and the U.N., who had funded, supported, and supervised the elections. At least one-third of Karzai’s votes – more than a million, were found to be fake. Karzai conceded massive fraud but conveniently blamed it on the U.N., international monitors, and foreign embassies.

Karzai’s loss of legitimacy as democratically elected president cast doubt over the credibility of the West and the U.N.. They were seen to be instrumental in illegitimately reinstalling a puppet regime that is inefficient and corrupt to the core, ranking 179th on Transparency International’s Corruption Perceptions Index, just ahead of last place—Somalia. As for his control over Afghanistan, he had hardly ventured out of Kabul, leading to him being derided as the ‘mayor of Kabul’. In effect, he was a political liability.

After the newly appointed Electoral Complaints Commission, which included U.N.-nominated members, tossed out enough Karzai votes to force a runoff, and when the U.S. insisted on having a say in the composition of the Election Commission, Karzai was convinced of the West’s intentions to dump him. He chose the war path. He accused the West of “orchestrating fraud in the presidential election. He alleged that foreigners did not want the September parliamentary election to take place. “They also want the parliament to be like me, battered and wounded,” he said, “”They want me to be an illegitimate president. And they want the parliament to be illegitimate.”

President Obama’s recent visit to Kabul was not pleasant for Karzai either. Obama gave Karzai a dressing down over his failure to address key issues of corruption, measures for transparency in upcoming parliamentary elections, and establishing guidelines on how to persuade insurgents to switch sides. Later, Obama said in a television interview he was displeased with Karzai’s performance.

With billions of Western dollars going down Afghanistan’s black hole with not much to show for it in terms of stability and development, with 100,000 foreign troops fighting a counterinsurgency campaign and another 30,000 new U.S. troops arriving whose success depend on a credible Afghan partner, and with Karzai, that partner, making a fool of himself, Obama had his reasons for losing his cool.

Karzai retorted by telling Afghan parliamentarians that his frustrations with the West might lead him to join the Taliban. Ironically, he said that America would be perceived as an invader if it interfered in the internal affairs of Afghanistan. He accused the U.N. and the international media of conspiring against him, with daily attacks on his character by foreigners intended to marginalize him, to make him “psychologically smaller and smaller”. “They wanted to have a puppet government. They wanted a servant government,” he said.

Karzai’s stinging criticism of the West and the U.N. drew an angry response from Washington. Declining to call him a U.S. ally after having called him a partner in peace for so long, the White House hinted that it might cancel his Washington meeting with President Obama next month.

Realizing he had overstepped his bounds, he made a conciliatory call to Secretary Clinton, followed by a visit to Kandahar to help build public support for a crucial U.S.-NATO offensive. But when confronted by a shura of 1,500 elders who heckled him about corruption and misrule and said the U.S. offensive would bring strife, Karzai, playing to the gallery, agreed to delay or even cancel the operation. “Until the time you say you are happy, the operation will not happen,” Karzai told them, with an embarrassed General Stanley McChrystal looking on.

The last thing Obama administration wanted to see was Hamid Karzai subverting U.S.-NATO’s planned offensive against the Taliban in Kandahar for which over 10,000 American troops are being positioned.

A barrage of disdain erupted from the Washington cognoscenti, who questioned his state of mind and leadership. A former U.N. envoy to Afghanistan, Peter Galbraith, described Karzai as “off balance” and “prone to tirades”. He said, “He can be very emotional, act impulsively. In fact, some of the palace insiders say that he has a certain fondness for some of Afghanistan’s most profitable exports,” apparently referring to opium. Abdullah, Karzai’s electoral opponent, said Karzai’s behavior was “not normal”.

Besides his row with President Obama, there are other reasons for the current low in U.S.-Karzai relations. As the U.S. engagement in Afghanistan reaches a turning point, Karzai is showing reluctance in kowtowing to Washington’s objectives and his keenness to pursue a course of his own.

Looking beyond the American withdrawal, Karzai, like many other collaborators, must begin to move to the center, distancing himself from the U.S. to improve his acceptability among Afghans opposed to American occupation. To survive in the treacherous political environment of Afghanistan, he must have a supportive new parliament and neutralize the threat from Taliban groups led by Mullah Omar. This explains his desperation to control the Election Commission and lead the reconciliation effort.

He is reluctant to subvert loyalties of Taliban foot soldiers and reintegrate the defectors into Afghan society, a task given by Obama’s commanders, fearing that a backlash from the Taliban leadership could scuttle his chances of future accommodation with them.

Against the wishes of the Obama administration, he publicly insists on directly initiating negotiations for a power sharing arrangement with Mullah Omar that could confer legitimacy on his government. Mullah Omar, however, refuses to deal with him, and Karzai’s overtures to Mullah Omar have angered Obama, who considers this a premature step.

Karzai is confronting the U.S. on another front too – the Loya Jirga (or the tribal Grand Assembly) scheduled for April 29, the outcome of which might largely determine the contours of an Afghan settlement. The Jirga denotes a power struggle. Karzai insists on his right to lead a national reconciliation effort and draw up the re-integration plan for the Taliban under a mandate from an international conference in London. The West would like the Jirga to develop a broad consensus for an ‘interim government’ that would force Karzai to step down from the presidency. They might use Abdullah Abdullah, a Tajik, to raise the banner of revolt against Karzai at the Jirga.

The U.S., stuck with him for lack of a workable alternative at least for now, needs Karzai-administration’s support for the success of the upcoming military initiative. There is too much at stake for the U.S. to allow him to become an obstacle. Hence they would like to deny him a majority in the new parliament. Obama would prefer a Karzai on the leash rather than a Karzai running free.

Leaders who place themselves in the service of imperialist masters are in fact weaklings, despite their trappings of power. They can break free or follow an independent course only at the peril of their lives. Refusal to fall in line may lead to an accident or a military putsch. Afghanistan has been witness to many such actions.

Karzai cannot survive without U.S. support and is in no position to threaten, confront or defy it. Yet if he does, one doesn’t have to be a Nostradamus to predict his fall.

A sound piece advice for Karzai was offered by Justin Raimondo of Antiwar.com: “Get out of town fast, because “the richest man on the planet” wouldn’t do well at Bagram”.