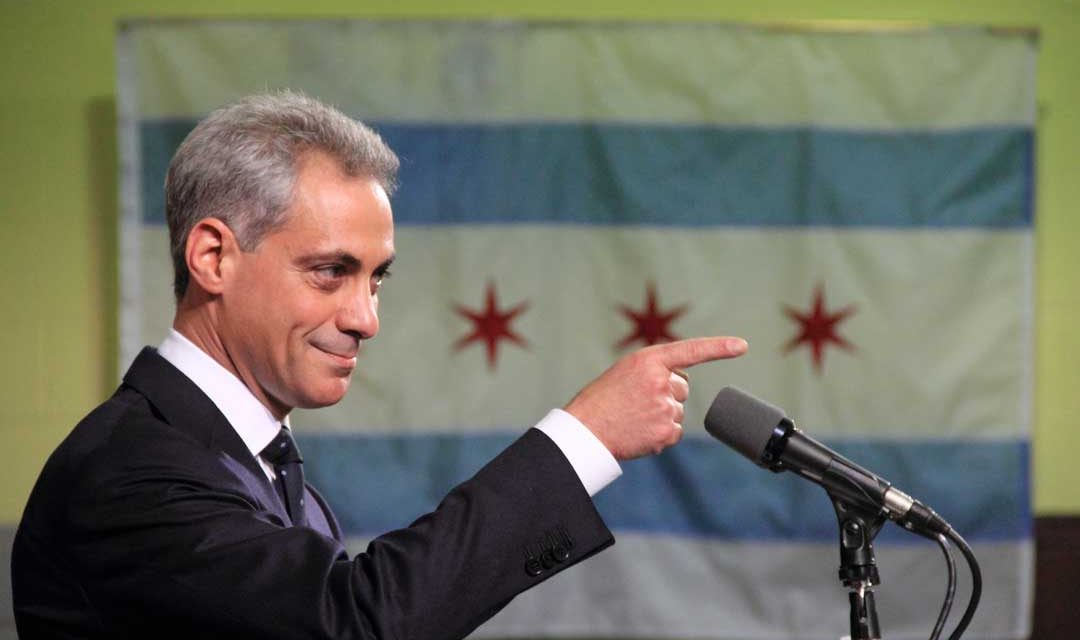 Rahm Emanuel at the announcement of his candidacy for Chicago mayor, November 13, 2010 (Daniel X. O'Neil/CC BY 2.0)

Chicago Mayor Rahm Emanuel has declared that the city's graduating high school students won't receive their diplomas unless they meet his demands.

Outdoing Donald Trump’s repeated threats to “send in the feds” to deal with Chicago’s problems, Mayor Rahm Emanuel, the man who promised to keep the war on Iraq going in 2007 in order for Democrats to run “against” it again in 2008, and the man who defunded Chicago schools, has declared that he will not give graduating high school students in Chicago their diplomas, unless they are signed up for college, an apprenticeship, a gap-year program, a job, or the U.S. military.

Imagine you are a young person in Chicago. You are forced by law to attend lousy schools for long hours five days a week (as well as to buy lousy health insurance from a private corporation — yay, Obamacare!). You are forced to bow before the racist and militarized might of Chicago’s Police Department, or risk death, torture, or imprisonment. You are compelled to live in danger, in poverty, in deprivation, and in close proximity to grotesque and gargantuan wealth. But imagine that you decide you’ll need a high school diploma, so you push through and do everything it takes to graduate.

Now imagine that Rahm Emanuel, a man whom the majority of the people of Chicago have said should resign, dangles your diploma in front of you. You earned it, but he holds it. Heeeeeeeeeere you go, he whines, you can haaaaaaaaave it. All you need to do is go to college.

What? Why is it his business? What if you don’t know what you want to study yet? What if you can’t find a college that will accept a poor report card from a lousy Chicago school? What if you can get accepted to colleges but you don’t have a dime to pay for them? What if the only colleges that will take you with no money down are non-educational for-profit scams like Trump University that will end up costing you hundreds of thousands of dollars you’ll never have? What if colleges refuse to believe you plan to attend for more than the first week — just long enough to get your hands on the high school diploma you earned — unless you show the colleges a heterosexual spouse, at least 2 offspring, a mortgage, a church membership, and a voter ID card, or some other nonsense that they choose to require?

Not to worry, not to worry, whines Rahm. You can get an apprenticeship or a job or a gap-year program. Well, what if you don’t want to? I didn’t want to do any of these things when I finished high school, and I didn’t do any of them. And what if a gap-year program requires that you be going to college the next year, and what if the application for it is similar to that for college, and what if you still have no money? What if the only jobs anywhere near your home are horrible, poverty-wage, and/or illegal? What if you can’t get or don’t want what satisfies Rahm? What if wide sections of Chicago are suffering under the burden of the $8 billion that Chicago residents send to the Department of “Defense” every year?

Not to worry! You can get your diploma immediately, plus lots of money (maybe, we’ll see, check the fine print), plus an education almost as good as college (or, anyway, poor enough so that you won’t know any better) — and the only downsides are that you have to do exactly whatever you’re told in every instant for eight years or more plus engaging in such horrific atrocities that your chances of suicide will skyrocket. All you have to do is sign up now for the permanent self-sustaining war machine that is bombing several dark-skinned Muslim nations thousands of miles away, creating enemies for the United States, destroying the natural environment, militarizing the police, eroding our liberties, and corroding our culture. And if you’re too young, we’ll wait, or we’ll waive pesky international laws — after all, they’d shut the whole thing down if we paid them too much attention.

Of course you could complain, but once you sign up you lose the right to free speech. And everyone will believe that you “volunteered” anyway. And dissenting from a military that people with better schools and mayors will never go near is treasonous. You don’t want to be treasonous, do you? Of course not! What you want is a high-paying job after the military. There’s no need to worry about that. As Chicago deteriorates, presidents will continue to threaten to “send in the feds,” and the feds will increasingly be private mercenaries who pay quite well. So, your transition will be smooth. In fact, if you like the weapon you have you’ll be allowed to keep the weapon you have. You’ll be a troop, after all, and we’ll finally support you (well, don’t count on it).­