The HBO documentary film Cries from Syria doesn’t tell the whole story about the so-called “Civil War” there, but it does highlight the most critical part.

Cries from Syria opens and closes with snapshots of the plight of Syrian refugees and the famous tragic footage of the dead child washed up on a beach in Turkey, the corpse of three-year-old Alan Kurdi. This bookending is in keeping with the film’s purpose, in the words of its director, to explain to the western world “the reasons behind the biggest migration crisis of the 21st century.”

“Syria’s ‘lost generation’ needs to be heard,” says filmmaker Evegeny Afineevsky (whose most well known previous work is his film Winter on Fire: Ukraine’s Fight for Freedom), “and this film provides them with a collective voice.”

The film makes for riveting, heart-wrenching, and at times gut-wrenching viewing. It tells the story of how the Syrian uprising against the regime of Bashar al-Assad began in Daraa after children were arrested and tortured for painting anti-Assad graffiti on a school wall.

As the protests grew and spread, the regime began violently suppressing demonstrations, prompting some among the Syrian military to defect and establish the Free Syrian Army (FSA). What began as peaceful protests grew into a civil war. 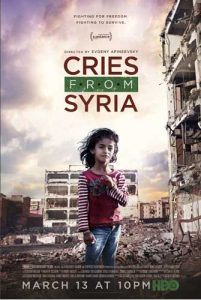 In Homs, the government implemented a siege to collectively punish the civilian population, starving them to death.

When the FSA moved into Aleppo in the summer of 2012, it was fighting alongside the al-Qaeda-affiliated group Jabhat al-Nusra—but this group, like Assad, soon began oppressing the civilian population, including with the use of torture.

In Darayya in August 2012, the regime bombed indiscriminately, destroying civilian areas. In Aleppo, a school was bombed, murdering scores of children. In Ghouta on August 21, 2013, civilians were targeted by the Assad regime with sarin gas. (The film doesn’t acknowledge the possibility that opposition forces may have carried out this chemical weapon attack, despite acknowledged uncertainty as to the responsible party. Human Rights Watch says it was “almost certainly” carried out by the Assad regime, which conclusion some commentators have raised questions about.)

It was only after this attack, according to the film, that the international community got involved, and under an agreement spearheaded by the US and Russia, Assad agreed to hand over his chemical weapons stockpiles to international inspectors.

Then the chlorine bombs started dropping.

The film tells how foreign powers then began intervening in Syria, adding to the plight of the civilian population. The Lebanese group Hezbollah entered the war on the regime’s side. The Islamic State of Iraq and Syria (ISIS) arose, treating both the regime and the FSA as its enemy and enforcing strict rule with punishments that included execution by beheading. Then Russia intervened on the regime’s side with the pretext of joining the fight against ISIS while indiscriminately bombing in Aleppo with cluster bombs and phosphorous munitions.

Amidst the horror, one group arose providing some hope: the Syrian Civil Defense, or the “White Helmets”, whose members risked their own lives to rescue people from the rubble in bombed out areas. 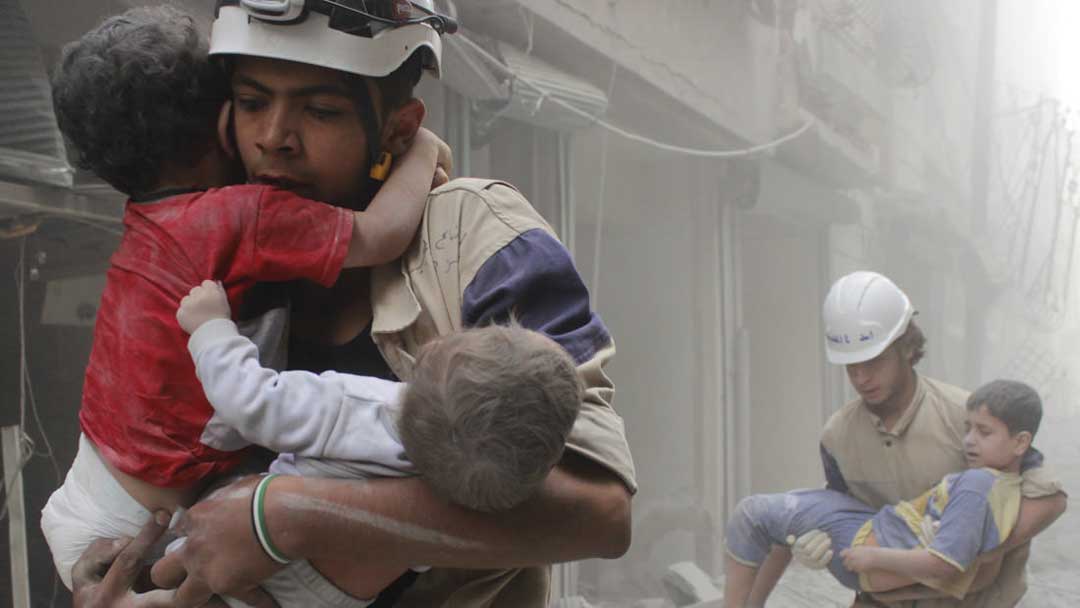 The final part of the film tells the story of Syrians fleeing the nightmare, being shot at by Turkish soldiers, having to sell everything to pay smugglers to help them get across borders, by land or sea. We again see the lifeless body of Alan Kurdi washed up on the shore.

By December 2016, an estimated 600,000 people had died in the war; 7 million Syrians became internally displaced; 4.8 million fled to Turkey, Lebanon, Jordan, Egypt, and Iraq; more than 1 million fled to Europe; and more than 13 million were in need of humanitarian assistance to survive.

Crisis from Syria is an important film. It tells a story that needs telling and emphasizing: the plight of the civilian population of Syria. In explaining how outside powers have intervened in ways that have only increased the suffering of civilians, however, the film is woefully silent about one: the government of the United States.

While the film propagates the official myth that the Obama administration didn’t get involved in Syria until the chemical weapon attack in Ghouta in 2013, the truth is the US had been intervening in Syria since at least early 2012, with the CIA funneling arms supplied by its regional partners Saudi Arabia and Qatar to rebel forces.

(Also left out is the story of how the US and Russia actually came to cooperate on ridding Syria of its chemical weapons: Obama had declared his intention to start bombing the country and his Secretary of State, John Kerry, ad-libbed a reply to a reporter’s question in which he said the Assad regime could avoid that outcome by disarming; Russian President Vladimir Putin then called on Assad to so disarm, and Assad accepted the deal, cutting the legs out from under the US’s pretext for military intervention.)

In the film, Jabhat al-Nusra (or the Nusra Front) appears seemingly out of nowhere. Missing is the story of how this group was empowered by the US intervention, with most of the arms the CIA was coordinating the flow of ending up in the hands of the extremists.

As for the origins of ISIS, the film attributes it to Assad releasing from prison extremist criminals who then founded the group. Actually, ISIS had its origins much earlier, in the US’s illegal war on Iraq in 2003, when, as the Council on Foreign Relations relates, “the Jordanian militant Abu Musab al-Zarqawi aligned his militant group, Jama’at al-Tawhid w’al-Jihad, with al-Qaeda, making it al-Qaeda in Iraq (AQI).” After Zarqawi was killed in a US airstrike in 2006, his successors “rebranded AQI as the Islamic State of Iraq, and later, the Islamic State of Iraq and al-Sham (ISIS)”, which reflected the group’s “broadening ambitions with the onset of the 2011 uprising in Syria.”

It wasn’t from a prison in Syria that ISIS’s leader, Abu Bakr al-Baghdadi, was released, but from a US-run prison in Iraq; indeed, most of the top leaders in ISIS had spent time in US prisons in Iraq between 2004 and 2011.

Neither was the rise of ISIS in Syria an unforeseen phenomenon. On the contrary, the US Defense Intelligence Agency warned in a memo in August 2012 that if the situation in Syria further unraveled, “there is the possibility of establishing a declared or undeclared Salafist principality in eastern Syria” (i.e., an Islamic State), which, the memo added, was “exactly what the supporting powers to the opposition want, in order to isolate the Syrian regime”; the “supporting powers” included “The West, Gulf countries, and Turkey”.

The New York Times then relayed US officials’ ostensible perplexity about “why hard-line Islamists have received the lion’s share of the arms” funneled by the CIA to rebel groups.

The US role in the Syrian tragedy is also an important story that needs telling, and it’s unfortunate that the western mainstream media have instead chosen to push a propaganda narrative in which the crisis is blamed on an absence of US intervention in Syria.

Cries from Syria, whether intentionally or not, similarly whitewashes the US’s role. While this does not detract from the importance of the story it tells about the plight of the civilian population, it does limit its value for assessing what should be done to help them in their plight.

This is a question the film leaves open. It does not advocate any political—or military—solution. That is not its purpose. Its goal, rather, in Afineevsky’s words, is to show viewers the plight of Syrian civilians “from the inside out, through the eyes of those trapped in-between—many of them children—and experience their suffering, bravery, struggle, survival and hope.”

At this the film certainly succeeds. It’s at times hard to watch. You might be tempted to look away.