Our Age of Folly

As I read Lapham, every age has been one of folly, and America has been abandoning its democracy from day one, if America ever had a democracy to abandon.

The United States has been growing progressively more insane for a long time. For my generation, the realization descended upon us in the 1960s when the military/security complex convinced Americans that if we permitted Vietnamese nationalist leader Ho Chi Minh to unify Vietnam, the dominoes would fall until the Communist World Revolution had us in its grip. This despite the fact that Stalin had killed off the Trotskyist world revolutionaries and declared “Socialism in one country.”

Nationalists in the West’s colonies, such as Vietnam and Cuba, misinterpreted the talk about making the world safe for self-determination as applying to them. Ho Chi Minh helped the US against Japan during World War II. His requests for US help for Vietnamese independence from France were cold-shouldered by the Truman administration. He did not turn against the US until Washington turned against him.

America’s participation in the Vietnam War lasted for a decade or thereabouts. The extraordinary carnage and war crimes served no interest other than the power and profit of the military/security complex and the paranoia of the arbiters of US foreign policy.

No lesson learned, we have spent the entirety of the 21st century to date repeating the mistake. This time it is stateless Muslim terrorists who somehow were merged in official US propaganda into the governments of seven countries in the Middle East and North Africa. After 17 years of murdering women, children, and village elders, destroying the infrastructure of countries, and bombing weddings, funerals, children’s soccer games, schools and hospitals, Washington has surpassed its criminal record in Vietnam. 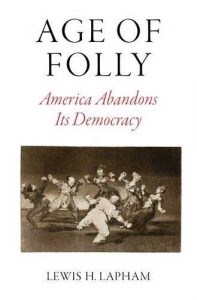 The folly of the Vietnam War was not explicated for us until the war’s aftermath. However, the folly of our 21st century crusade against evil was presented to us in monthly installments as the folly unfolded by Lewis Lapham’s articles in Harper’s and later in the Lapham Quarterly. These essays have been collected together in a book, Age of Folly: America Abandon’s Its Democracy (Verso, 2016).

Lapham is one of the remaining “men of letters” who date from a time when some Americans still existed who preferred the red pill to the blue pill. In the 21st century, awareness has been out of fashion, and there were few to learn from Lapham’s demonstrations of our folly.

Lapham’s book should be titled “Our Age of Folly.” As I read Lapham, every age has been one of folly, and America has been abandoning its democracy from day one, if America ever had a democracy to abandon.

Few remember that the Iraq War, ongoing since 2003, was supposed to be a “cakewalk” that would last three weeks. The war would not be the multi-trillion dollar event it turned out to be. We were assured the war would cost only $70 billion and be paid for with Iraqi oil revenues. George W. Bush fired his White House economist, Lawrence Lindsey for saying that the war could cost $200 billion. The only beneficiaries of the war are the recipients of the profits of the military/security complex and the police state agencies that the “war on terror” was used to justify.

Lapham finds in Lt. Gen. Thomas McInerney’s announcement that the US was launching a “war of liberation to remove Saddam’s regime from Iraq” the same hubris, arrogance, and hegemonic aspirations that caused ancient Athens to ruin itself in the Peloponnesian War. Reading Thucydides’ History of the Peloponnesian War, Lapham reports, “was as if I were reading the front page of the New York Times or the Pentagon’s Defense Planning Guidance.”

Being a man of letters, Lapham can make words dance and bite, and many are bitten. Michael Ignatieff, “a brand-name foreign-policy intellectual recruited from the faculty of Harvard University,” writes in behalf of Washington’s exercise of America’s imperial power “sententious and vacant prose, most of it indistinguishable from the ad copy for an Armani scarf or a Ferragamo shoe. Too much direct quotation from the professor’s text might be mistaken for unkindness.”

Lapham describes the transformation by the media and national security experts of the ragged, lightly armed Taliban into “an Arab host gathered on the plain of Armageddon under the glittering banners of militant Islam.” He relates policy arguments in which one expert declared that it is time to “flip” Iran. No said Dimitri Simes, president of the Nixon Center, it is the moment to drop a nuclear bomb on Afghanistan for the “very strong demonstration effect” that would get the entire Middle East in line with Washington’s orders. Challenged by someone who thought this prescription displayed a cavalier disregard for human life, Simes responded that “the NATO victory in Serbia was not won against the Serbian military ‘but because we were effective against the Serbian civilian infrastructure.’”

Ah, the morality of Americans. Winning is all that counts.

Few movers and shakers could resist hitching their wagon to the pursuit of Osama bin Laden, who died from renal failure in December 2001 before the hunt for him was well underway. Lapham reports that Geraldo Rivera, not to be outdone in the patriotic show of hunting down evil, “went off to the Khyber Pass with a pistol in his luggage, informing his viewers on FOX News that he would consider killing Osama bin Laden if the chance presented itself somewhere on the snowy heights of Tora Bora.”

Lapham’s essays walk us through the period from arrogance to quagmire to defeat covered up with a declaration of victory. In 2015 the Russians had to come in to clear up the mess Washington made of the Middle East, a favor for which we have not forgiven them.

Lapham thinks that the readers of Harper’s could have done a better job of running US foreign policy than the supervisors of the empire in Washington. I am sure that he is right, and so could have my own readers.

“A party of great vested interests, banded together in a formidable confederation; corruption at home, aggression to cover it up abroad . . . sentiment by the bucketful; patriotism and imperialism by the imperial pint; the open hand at the public exchequer; the open door at the public house; expensive food for the millions, cheap labour for the millionaire.”

Lapham doesn’t get everything correct. He doesn’t give Reagan a fair break or credit for ending stagflation and the Cold War. Instead, Lapham portrays Reagan as just another servant of the rich. Lapham doesn’t catch on until late about 9/11, but neither did most others, including architect Richard Gage, founder of Architects & Engineers for 9/11 Truth, now 3,000 strong. Lapham never says 9/11 was an inside job, but he artfully describes how the orchestra and chorus were miraculously ready to play the required tune, just as somehow the US military was ready and able to invade Afghanistan less than one month after 9/11. In other words, the invasion force was assembled awaiting the pretext, and the orchestra and chorus were awaiting the 9/11 conductor’s baton.

Lapham spares no one, least of all his own class. As a young man Lapham was a member of the upper class and remains today a member of the Council on Foreign Relations. He could expect a career guaranteed by the preferments bestowed on his class. Returning from Cambridge University, he secured an interview with the CIA, looking forward to an exciting life as a spy serving the cause of freedom and democracy. In a passage that is perhaps the most amusing in the book, he describes boning up for the interview by “reading about Lenin’s train and Stalin’s prisons, the width of the Fulda Gap, the depth of the Black Sea. Instead of being asked about the treaties of Brest-Litovsk or the October Revolution, I was asked three questions bearing on my social qualifications for admission into what the young men at the far end of the table clearly regarded as the best fraternity on the campus of the free world.”

His fellow Yalies wanted proof of his upper class bonafides and relied on three questions that would reveal if Lapham were the real goods. Lapham had to answer the question, which club does one take from the golf bag when standing on the thirteenth tee at the National Golf Links in Southampton, followed by the question of the direction at dusk in late August of the prevailing wind on final approach under sail into Hay Harbor on Fishers Island, followed by “Does Muffy Hamilton wear a slip?”

Muffy was a very beautiful, very rich young socialite “much admired for the indiscriminate fervor of her sexual enthusiasms,” which those with bonafides would have experienced. Lapham correctly answered the first two questions. His experience with Muffy was limited to mixing her a drink at the New Haven Fence Club. He knew only by second hand authority that her underclothes consisted of Belgian lace.

The questions, Lapham reports, killed his interest in a CIA career. He apologized for having misread the job description and walked out of the interview. So much “smug complacence, self-glorifying certainty and primogeniture crowed into so small a room” offended Lapham and revealed to him an attitude “not well positioned for intelligence gathering.”

The failure of intelligence, not only the CIA’s, but also the failure of the intelligence of the leadership class, politicians, media, and a goodly chunk of the American people, explains the folly that has devoured our civil liberties and the economic prospects of our people and has left us with children unfamiliar with the world both past and present, making them “easy marks for the dealers in totalitarian politics” of which our country has an excess supply.

In this digital age in which wordsmiths are extinct, to read a Lapham essay is a delight for those of us old enough to appreciate the performance. One of Lapham’s virtues is that he is a delight to read whether or not one agrees with him. His other virtue is that in his sarcasm is a true picture of our era of folly.