Samantha Power Can See Russia from Her Padded Cell 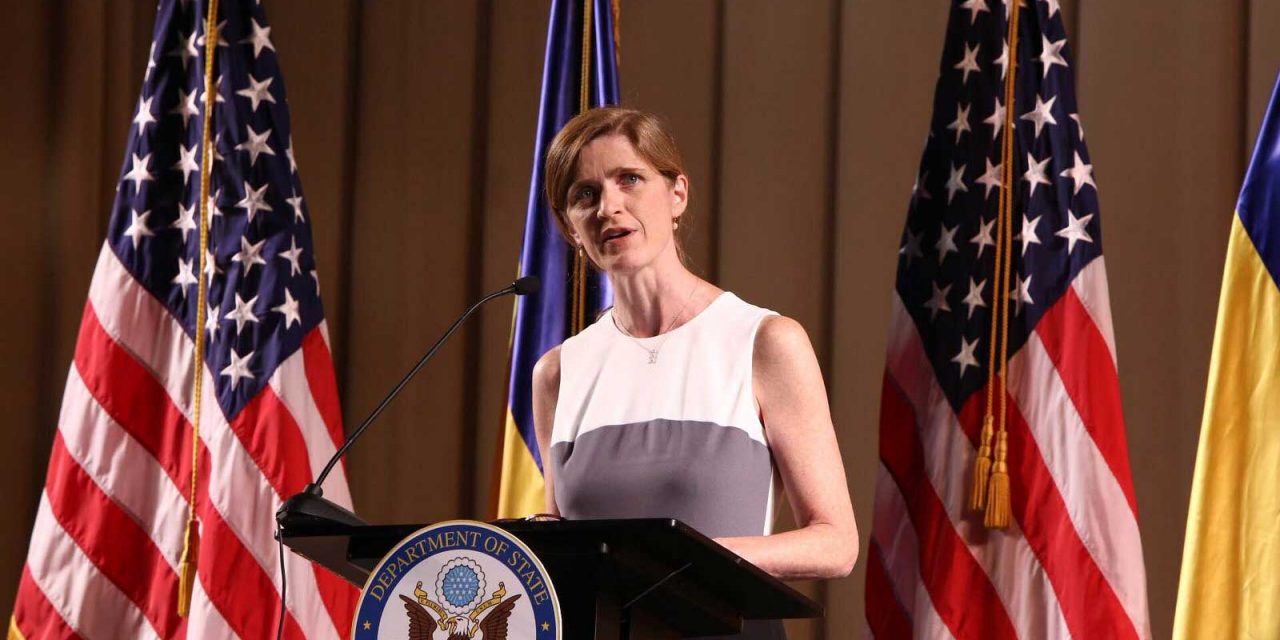 It's not Russia, but government officials like Samantha Power who represent a menacing danger to the US and to the rule of law.

“For years, we have seen Russia take one aggressive and destabilizing action after another. We saw it in March 2014, not long after mass peaceful protests in Ukraine brought to power a government that favored closer ties with Europe, when Russia dispatched its soldiers to the Ukrainian peninsula of Crimea. The ‘little green men,’ as they came to be called, for Russia denied any ties to any of them, rammed through a referendum at the barrel of a gun, which Mr. Putin then used to justify his sham attempted annexation of Crimea.”

The “peaceful protests” involved hundreds of casualties, while the “ramming at the barrel of a gun” involved zero. The “peaceful protests” followed the preemptive exposure of U.S. facilitation of a coup. The new government quickly began threatening the rights and lives of ethnic Russians. The annexation of Crimea followed an overwhelming vote, which the United States has never dared to propose be re-done. The annexation was successful. Russia always had troops in Crimea. That it sent in more was to its discredit but legal under its basing agreement.

“We saw it months later in eastern Ukraine, where Russia armed, trained, and fought alongside separatists. Again Russia denied any role in the conflict it manufactured, again flouting the international obligation to respect the territorial integrity of its neighbor.”

Russia did not manufacture the conflict. It certainly did not in any major way “fight alongside” the “separatists” — many of whom were not seeking separation. It’s noteworthy that the claims about shooting down an airplane that were so central to this sort of speech for so long have faded away along with the idea that there was evidence to back them up.

“We saw it also in Russia’s support for Bashar al-Assad’s brutal war in Syria – support it maintained even as the Assad regime blocked food and medicine from reaching civilians in opposition-held areas, civilians who were so desperate that they had resorted to eating leaves, even as photographs emerged of countless prisoners who had been tortured to death in Assad’s prisons, their bodies tagged with serial numbers, even as the Assad regime repeatedly used chemical weapons to kill its own people.”

Power has no evidence for her “chemical weapons to kill its own people” old stand by (and would it be OK to kill someone else’s people?), and that lack of evidence was critical to preventing major U.S. bombing in 2013, the year after the U.S. had rejected out of hand a 2012 Russian peace deal that would have included Assad stepping down. The U.S. preferred a violent overthrow and believed it to be imminent. Of course Assad and Russia and many other parties have committed horrible acts of war in Syria, just as has the United States.

“We saw it in 2015, when Russia went further by joining the assault on the Syrian people, deploying its own troops and planes in a campaign that hit hospitals, schools, and the brave Syrian first responders who were trying to dig innocent civilians out of the rubble. And with each transgression, not only were more innocent civilians killed, maimed, starved, and uprooted, but the rules that make all of our nations more secure – including Russia – those rules were eroded.”

All true . . . of Russia and of the United States.

Power claims Russia funds France’s National Front party and hacks German computers — and claims, despite limited evidence even of these actions, to know “Russia’s” motives. She claims Russia planned a U.S.-in-Ukraine-style coup in Montenegro, without noting that Montenegro funds the Atlantic Council.

Power then claims with absolutely no evidence that “the Russian government sought to interfere in our presidential election with the goals of undermining public faith in the U.S. democratic process, denigrating one candidate, and helping the other candidate. Our intelligence agencies assess that the campaign was ordered by President Putin and implemented by a combination of Russian government agencies, state-funded media, third-party intermediaries, and government-paid trolls. We know that, in addition to hacking the Democratic National Committee and senior Democratic Party officials, Russia also hacked U.S. think tanks and lobbying groups. And we know that Russia hacked elements of multiple state and local electoral boards, although our intelligence community’s assessment is that Russia did not compromise vote tallies. But think for just a moment about what that means: Russia not only tried to influence our election but to access the very systems by which we vote.”

In fact we know none of these things, and the “very systems by which we vote” are, in most places, essentially worthless and totally unverifiable election machines.

“We must also forcefully reject the false equivalency between the work that the U.S. government and the Russian government are doing in other countries. There is a world of difference between supporting free and fair elections, and investing in independent institutions that advance human rights, accountability, and transparency, as we do; and, on the other hand, trying to sow distrust in democratic processes, misinform citizens, and swing elections toward illiberal parties, as Russia is doing.”

Power then explains what her point is, what she wants done. She wants NATO funded and put on hair trigger alert. And she wants $1 billion in anti-Russian propaganda:

“That means maintaining our robust support for NATO and making clear our nation’s steadfast commitment to treat an attack on any NATO member as an attack on us all. . . . A report by the UK parliament found that the Russian government spent between $600 million and $1 billion a year on propaganda arms like RT. So we need to be spending at least as much – and arguably much more – on training and equipping independent reporters, protecting journalists who are under attack, and finding ways to get around the censors and firewalls that repressive governments use.”