The Balancing Act is Over: What Elor Azaria Taught Us about Israel 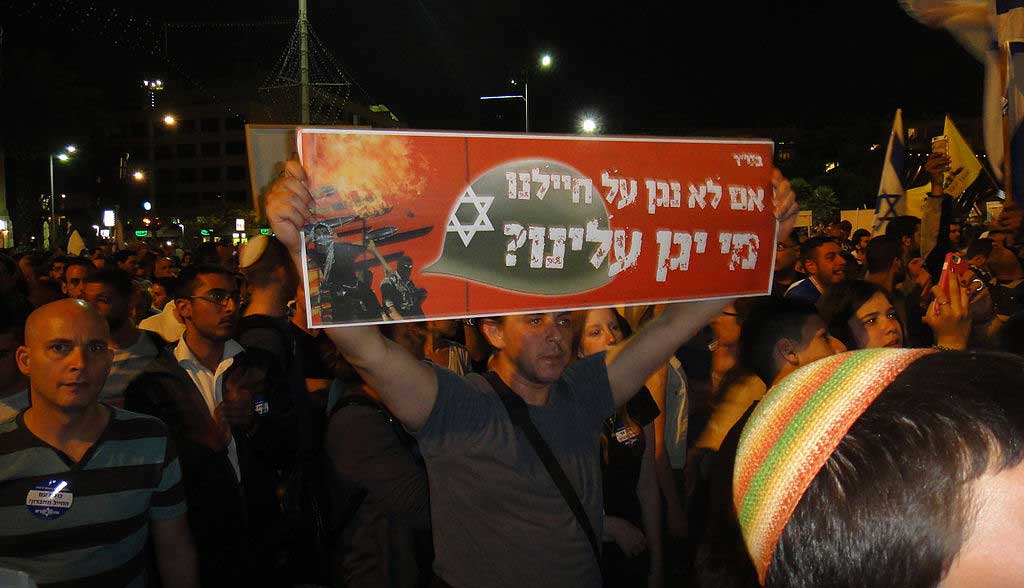 "If we don't protect our soldiers, who will protect us?" Demonstrators express their support for Elor Azaria. (בן נחום/CC BY-SA 4.0)

The reaction in Israel to the conviction of an IDF soldier murdering a Palestinian man tells us exactly where Israelis stand on Palestinian human rights.

For some, the ‘manslaughter’ conviction—following the murder by Israeli army medic, Elor Azaria, of already incapacitated Palestinian man, Fattah al-Sharif—is finally settling a protracted debate regarding where Israelis stand on Palestinian human rights.

Nearly 70 percent of the Israeli public supports calls to pardon the convicted soldier, who is largely perceived among Israelis as the “child of us all.”

Israeli leaders are also lining up to lend their support to Azaria and his family. These sympathetic politicians include Prime Minister Benjamin Netanyahu, and ministers Naftali Bennett and Miri Regev, among others. Leading opposition leaders are also on board.

Pro-Israeli pundits, who never miss an opportunity to highlight Israel’s supposed moral ascendency took to social media, describing how the indictment further demonstrates that Israel is still a country of law and order.

They seem to conveniently overlook palpable facts. Reporting on the verdict, ‘The Times of Israel’, for example, wrote that “last time an IDF soldier was convicted of manslaughter was in 2005, for the killing of British civilian Tom Hurndall two years earlier.”

Between these dates, and years prior, thousands of Palestinians were killed in the Gaza Strip alone, mostly in the Israeli wars of 2008-9, 2012 and 2014. Although thousands of children and civilians were killed and wounded in Gaza and the rest of the Occupied Territories and, despite international outcries against Israel’s violations of international law, there is yet to be a single conviction in Israeli courts.

But why is it that some commentators suggest that the Azaria trial and the show of unity around his cause by Israeli society is an indication of some massive change underway in Israel?

Yoav Litvin, for example, argues in ‘TeleSur‘ that the “precedent set by this case will further solidify the complete dehumanization of Palestinians and pave the way for further ethnic cleansing and genocide in the Occupied Palestinian Territories.”

In an article, entitled: “Like Brexit and Trump, Azaria verdict exposes a moment of transition in Israel”, Jonathan Cook also eluded to a similar idea. “The soldier’s trial, far from proof of the rule of law, was the last gasp of a dying order,” he wrote.

Neither Litvin nor Cook are suggesting that the supposed change in Israel is substantive but an important change, nonetheless.

But if the past and the present are one and the same, where is the ‘transition’, then?

The creation of Israel atop the ruins of Palestine, the ethnic cleansing that made Israel’s ‘independence’ possible, the subsequent wars, occupation and sieges are all devoid of any morality.

Indeed, Israel was established with the idea in mind that a “Jewish state” is possible without the ethnic cleansing and genocide of the Palestinian Arabs.

In a letter to his son in 1937, David Ben Gurion, Israel’s first Prime Minister after the country’s establishment in 1948, wrote: “We must expel the Arabs and take their places and if we have to use force, to guarantee our own right to settle in those places ­ then we have force at our disposal.”

In the year that Israel was established, the United Nations defined genocide in Article 2 of the ‘Convention on the Prevention and Punishment of the Crime of Genocide’, as follows:

In other words, there is nothing new here since the ‘mainstreaming of genocide’ in Israel took place before and during the founding of the country, and ever since.

Fortunately, some Israeli leaders were quite candid about the crimes of that era.

“Jewish villages were built in the place of Arab villages. You do not even know the names of these Arab villages, and I do not blame you because geography books no longer exist,” former Israeli leaders, Moshe Dayan said while addressing the Technion as reported in ‘Haaretz’ on April 4, 1969. “There is not a single place built in this country that did not have a former Arab population.”

But throughout these years, Israel has managed to sustain a balancing act, generating two alternate realities: a material one, in which violence is meted out against Palestinians on a regular basis, and a perceptual one, that of a media image through which Israel is presented to the world as a ‘villa in the jungle’, governed by democratic laws, which makes it superior to its neighbors in every possible way.

Former Israeli President, Moshe Katsav, demonstrate the latter point best. “There is a huge gap between us (Jews) and our enemies,” he was quoted in the ‘Jerusalem Post’ on May 10. 2001. “They are people who do not belong to our continent, to our world, but actually belong to a different galaxy.”

In fact, Israeli commentators on the Left often reminisce about the ‘good old days’, before extremists ruled Israel and rightwing parties reigned supreme.

A particular memory that is often invoked was the mass protest in Tel Aviv to the Israeli-engineered Sabra and Shatila massacres of Palestinian refugees in South Lebanon in 1982.

Protesters demanded the resignations of then-Prime Minister, Menachem Begin, and his Defense Minister, Ariel Sharon. Both men were accused of allowing the massacres of Palestinians by Christian Phalange to take place. An Israeli commission of investigation found Israel guilty of ‘indirect responsibility’, further contributing to the myth that Israel’s guilt lies in the fact that it allowed Christians to kill Muslims, as Sharon complained in his biography, years later.

At the time, it did not occur to Israeli protesters as odd the fact that Begin, himself, was the wanted leader of a terrorist gang before Israel’s founding and that Sharon was accused of orchestrated many other massacres.

Many in Israeli and western media spoke highly of the moral uprightness of Israeli society. Palestinians were baffled by Israel’s ability to carry out war crimes and to emerge in a positive light, regardless.

“Goyim kill Goyim and the Jews are blamed,” Begin had then complained with a subtle reference to what he perceived as a form of anti-Semitism. Aside from Sabra and Shatila, tens of thousands of Lebanese and Palestinians were killed in the Israeli invasion of Lebanon in 1982.

Historical fact shows that Israel is not experiencing a real transition, but what is truly faltering is Israel’s balancing act: its ability to perpetrate individual and collective acts of violence and still paint an image of itself as law-abiding and democratic.

Zionist leaders of the past had played the game too well and for far too long, but things are finally being exposed for what they really are, thanks to the fact that Jewish settlers now rule the country, control the army, have growing influence over the media and, therefore, define the Israeli course and PR image.

“This new army (of settlers) is no longer even minimally restrained by concerns about the army’s ‘moral’ image or threats of international war crimes investigations,” wrote Cook.

And with that new-found ‘freedom’, the world is able to see Israel as it is. The balancing act is finally over.