Was The Women’s Boat to Gaza an Existential Threat to Israel? 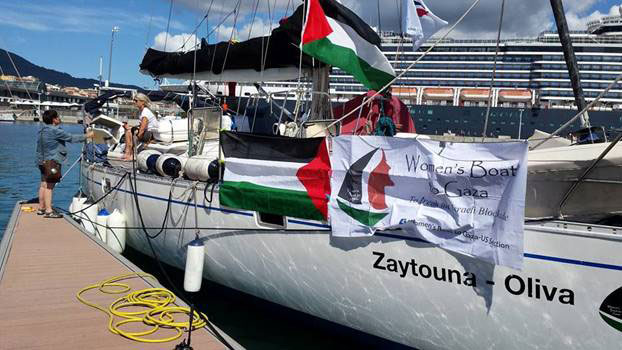 There is a lesson to be learned in the fact that Israel equates peace activists attempting to break the illegal blockade of Gaza with an act of terrorism.

The Israeli official narrative regarding its conflict with the Palestinians is deliberately confounded because a muddled up discourse is a convenient one. It allows the narrator to pick and choose half-truths at will, in order to create a falsified version of reality.

For instance, this is part of what Israeli Prime Minister Benjamin Netanyahu said at the United Nations on September 22:

“Ladies and Gentlemen: Israel fights this fateful battle against the forces of militant Islam every day. We keep our borders safe from ISIS, we prevent the smuggling of game-changing weapons to Hezbollah in Lebanon, we thwart Palestinian terror attacks in Judea and Samaria, the West Bank, and we deter missile attacks from Hamas-controlled Gaza.”

In just a single paragraph, Netanyahu has chosen to create an alternate reality, despite the fact that: ISIS’s main victims, thus far, have been Muslims, never Israelis; Hezbollah, which is embroiled in a sectarian fight in Syria is a Lebanese movement that is also at war with ISIS; the uprising in the West Bank has been largely led by desperate youth who were born under violent Israeli military Occupation and have no trust in their own leadership; Hamas has not lobbed any homemade rockets at Israel since the destructive Israeli war of 2014, which killed 2,251 Palestinians, mostly civilians.

While Netanyahu’s statements are not outright lies, the selection of these statements, not keen on dates, devoid of context and lacking in any Israeli accountability or even introspection, makes them simply untrue. Needless to say, they’re utterly confusing as well, especially for those who rarely understand the nature of Israel’s conflict with the Palestinians and its other Arab neighbors.

The Israeli Prime Minister’s language at international forums is quite typical, if not predictable; not only typical of him as a statesman, but of generations of Israeli leaders, past and present. Former Israeli Prime Minister and President Shimon Peres, who died late September, mastered this Israeli style, bar none. Although he was the architect of the Middle East’s first and only nuclear bomb, he was eulogized by western governments and media, including many in the Left, as a peacemaker, a heroic figure and statesman.

But Peres was the last of the ‘founders of Israel’ generation. That generation’s approach to war and diplomacy was unique and cannot be repeated. They were mostly foreign-born; spoke various languages; followed a unified blueprint in politics and had clear, decisive goals.

In contrast, Netanyahu is the first Israeli Prime Minister to be born in the country, after its establishment on the ruins of Palestine in 1948. His diplomacy is as violent as is his conduct on the ground. He seems fearless insofar as his confidence in his benefactors—namely the United States government, which has recently pledged to Israel another $38 billion dollars in unconditional military aid over the course of ten years.

With no legal or political accountability whatsoever, and with unwavering US backing of Israeli actions, no matter how destabilizing or destructive, Netanyahu’s logic, however lacking, will always prevail.

But considering that Israel is achieving precisely its intended goals—expanding its illegal settlements, sustaining its Occupation of East Jerusalem and the West Bank, constantly building up its armament and advancing its strategic interests at the expense of its neighbors, and escaping any possibility of legal culpability, why does it always feel as if Israel is besieged and embattled?

It seems that the stronger Israel becomes, the larger in size and more destructive in its military capabilities, the weaker and more threatened it perceives itself.

Netanyahu’s words give the impression that his country’s very existence is imperiled. In fact, this is the same language that is constantly emanating from most Israeli circles—official, media, academic and even ordinary people. This perception has continued even after Israel expanded its borders by occupying the rest of historic Palestine following the disastrous war of 1967; even when Israel claimed massive swathes of Jordanian, Egyptian, Lebanese and Syrian territories.

It seems that the stronger Israel becomes, the larger in size and more destructive in its military capabilities, the weaker and more threatened it perceives itself.

Even with their tactless approach to diplomacy, the new generation of Israeli leaders is still pushing the same mantra: that of a besieged country facing an existential threat.

In 2015, following the signing of the Iran nuclear deal between Iran and the US—along with other countries—Israel was denied the central component of its ‘existential threat’ discourse. With an Iranian ‘nuclear holocaust’ averted—although never convincingly from the Israeli viewpoint—other imagined threats were pushed to the very top of the Israeli agenda.

Besieged, bombed out and impoverished tiny Gaza maintained its standing as a major cause for alarm and one of the greatest threats to Israel’s security. But, strangely, the civil society-led non-violent Boycott, Divestment and Sanctions movement (BDS) was quickly pushed to the top of the ‘existential threat’ pyramid.

Modeled around the anti-Apartheid South African boycott movement, BDS aims at isolating the Israeli Occupation of Palestine, and, using non-violent means, ending it.

The language used against Iran, Hezbollah, Hamas and others is now being utilized against BDS. In a conference organized by the Jewish National Fund (JNF) in New York last month, Israeli Justice Minister, Ayelet Shaked, called BDS a ‘terrorist organization.’

“BDS is the new face of terror,” she said. “While in Gaza (terrorists) are digging underground tunnels into Israel, the BDS movement is digging tunnels to undermine the foundations and values of Israel. We have to stop these tunnels as well.”

Like Netanyahu, Shaked too claimed to be “fighting Islamic extremism”, although BDS supporters come from many countries and profess no particular religion.  In fact, many of them are Jewish activists.

Yet, that does not matter. It never did, because the enemy, for now, has to remain “Islamic terrorism”, even if it is neither Islamic nor terrorist.

In a response to the Israeli navy interception, arrest and deportation of a group of women who attempted to break the Israeli siege on Gaza by using a small boat, Israel’s Defense Minister, Avigdor Lieberman, spun his words to connect the non-violent activists with something else entirely.

“We will not accept any (rocket) fire, any provocation, against the citizens of Israel by whoever it might be, or any attack on Israel’s sovereignty. Not rocket fire, and not a flotilla,” Lieberman said in an army ceremony on October 7.

The activists atop the boat, included Nobel Peace Prize winner, Mairead Maguire, of Northern Ireland. In Lieberman’s logic, Maguire’s act to end a decade-long blockade on a poor region is equivalent to the firing of a rocket.

Regardless of the type of criticism Israel faces and the tactics used to end its Occupation of Palestine, Israel will always connect the proverbial dots to produce the same outcome: Israel’s existence is at stake, all acts of resistance, however symbolic, are terrorist, and Israel has to do whatever it takes to defend itself from looming destruction by rogue terrorists.

Nonetheless, unlike Shimon Peres and his generation of leaders, the Israeli story as told by Israel’s new leaders is no longer selling. Gaza, which is rendered uninhabitable by the United Nations come 2020, hardly threatens the existence of Israel, nor are BDS activists, who demand accountability, vile terrorists. Needless to say, a group of women atop a small boat, carrying a symbolic amount of supplies to impoverished Gaza, were not about to take the Middle East’s only nuclear power down.

“The Israeli army then took over the boat. The women showed no resistance as they wanted to emphasize that their mission was peaceful. The women cried because they could not reach Gaza,” Al Jazeera reported.