Hillary Clinton, the Queen of Flip-Floppery, on Genocide 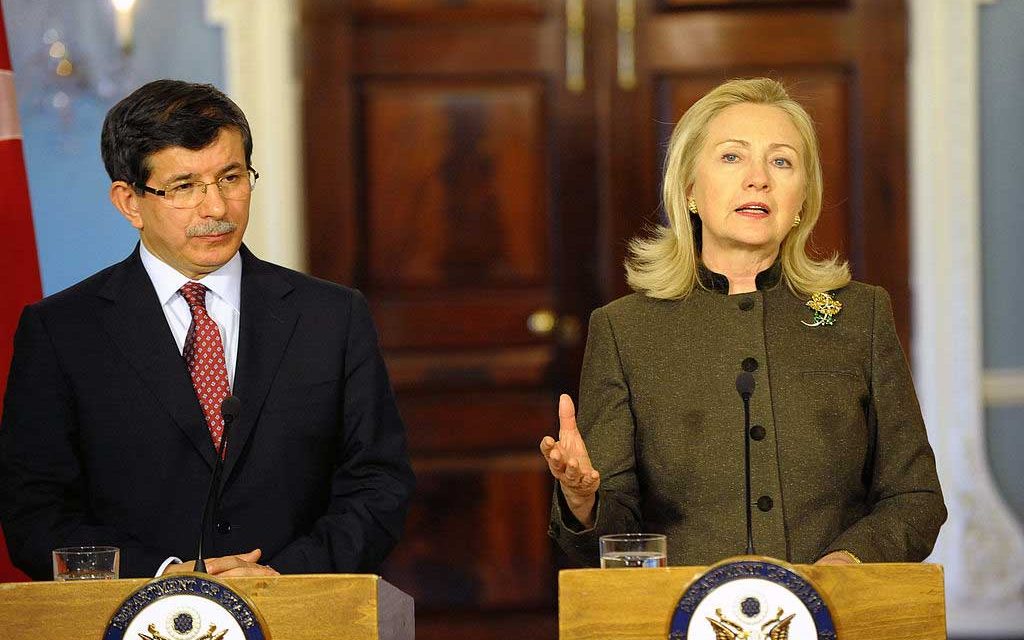 US Secretary of State Hillary Rodham Clinton with Turkish Foreign Minister Ahmet Davutoglu at the US Department of State in Washington, DC, on February 13, 2012. (State Department)

But Clinton’s flip-flops on the most extreme form of mass murder—genocide—may be the most disturbing. In her case, it’s the proven genocide of 1.5 million Christian Armenians (as well as Hellenics and Assyrians) committed by Ottoman Turkey from 1915–23.

Evolution of a Flip-Flopper

Breaking his promise to call the Armenian murders “genocide,” President Clinton dubbed them simply “deportations and massacres.” In 2000, and encouraged by Israel’s Shimon Peres, the President got then House Speaker Dennis Hastert (R- IL)—now a convicted child molester—to cancel what would have been a winning vote on an Armenian genocide resolution.

As a US Senator from New York (2001–2009), however, Hillary Clinton did cosponsor Armenian genocide resolutions, though they didn’t come up for a vote. She also cosigned letters to President George W. Bush in 2005 and 2006 asking him to acknowledge the Armenian genocide.

Running for president against Obama in 2008, Senator Clinton assured human rights advocates that “the horrible events perpetrated by the Ottoman Empire against Armenians constitute a clear case of genocide.” And “Congress and the President” should recognize the Armenian genocide because of “our common morality and our nation’s credibility.”

But Clinton totally flip-flopped when she became President Obama’s Secretary of State (2009–2013). She refused to utter the G-word with regard to Armenians. And she opposed Congressional resolutions on the Armenian genocide. Hillary Clinton believed that kowtowing to Turkey—a major human rights violator who was still persecuting Kurds and its remaining Christians—was more important than denouncing genocide.

Touring the Caucasus in 2010, Secretary Clinton visited Armenia’s Genocide Memorial, as many foreign diplomats do. The US Embassy emphasized, however, that her visit was strictly “private,” not official again, to appease Turkey.

At a January 2012 State Department “Town Hall,” a staffer asked Clinton about the Armenian genocide. It has “always been viewed,” decreed the Queen of Flip-Floppery, “as a matter of historical debate.” Her Majesty’s royal wand had magically transmuted what four years earlier was “a clear case of genocide” into an issue that is “always debatable.”

Sixty US House members from both parties immediately blasted Her Royal Flip-Floppery for “mischaracterizing the Armenian genocide.” Cross-examined a month later by a House committee, Queen Hillary was unrepentant. She had conveniently forgotten all about America’s “morality and credibility,” perhaps because she herself is deficient in those qualities.

Political expediency and US State Department cowardice certainly played roles in Clinton’s genocide flip-flops. But she may also have been influenced by paid, registered foreign agents for Turkey, such as David Mercer, who regularly try to block Armenian genocide acknowledgment.

A former finance official with the Democratic National Committee, Mercer was subcontracted by another Turkish foreign agent, the DLA Piper lobbying firm. Mercer and DLA executives have contributed generously to HRC campaigns.

Followers of the powerful Turkish Muslim cleric Fethullah Gulen have also donated heavily to Clinton’s campaign and the Clinton Foundation.

Incidentally, David Mercer failed to report his political contact with Abedin and Marshall as required by the Foreign Agents Registration Act (FARA).

Another Flip-Flop and Beyond

In yet another flip-flop, an aide to Clinton told Newsweek last year that she “has a record of expressing her own view that this was a [Armenian] genocide.” And yet Her Majesty is not embarrassed by any of this.

In 2015, Clinton belatedly labelled as “genocide” the mass murders that ISIS has been committing against Christians, Yazidis, and others in Syria. As president would she flip-flop on the ISIS genocide too?

Two Columbia University studies, German Chancellor Angela Merkel, and others say that Turkey has directly aided ISIS and other jihadists for years. That makes Turkey complicit in the ISIS genocide.

So, just as they caved in to Turkey on the Armenian genocide, Queen Hillary and Bill Clinton could, as co-presidents, relabel the ISIS as non-genocidal simply to spare Turkey any responsibility.

If we also recall that Pres. Bill Clinton refused to label as “genocide” the 1994 Rwandan mass murders, it’s clear that genocide denial or diminishment goes far beyond the Armenian case.

And it’s not just about the Clintons. A number of other elected and appointed US officials, including UN Ambassador Samantha Power, have been similarly unprincipled on the Armenian and other genocides. Neither is it about America’s becoming the “world’s policeman.”

When the Queen of Flip-Floppery said it’s about America’s “common morality and our nation’s credibility,” she was correct, though she obviously didn’t mean it.

No, it’s also about campaign contributions and payoffs, playing word games to please bullies and bluffers such as Turkey, and deceiving the American people.

It’s something to think about as we cast our votes.