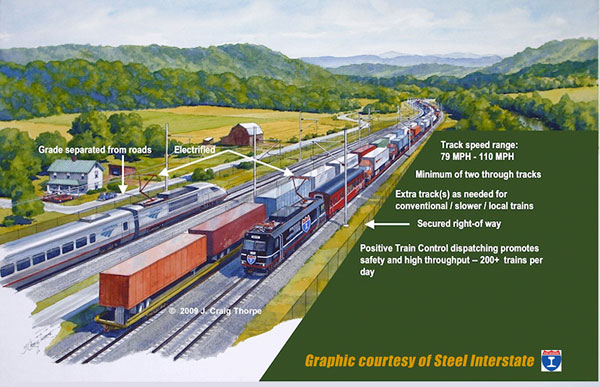 If the US government wasn't spending so much money on war and destruction, it could do something more productive like bringing America electric railroads.

The forthcoming book from creative activist and kayaktivist extraordinaire Bill Moyer and his Backbone Campaign colleagues should remake the United States and limit the oncoming onslaught of climate suffering. It’s called Solutionary Rail: A People Powered Campaign to Electrify America’s Railroads and Open Corridors to a Clean Energy Future.

Here’s the idea. There is huge potential for solar and wind energy in vast open spaces of the United States. There is a need for pathways through which to transmit renewable-produced electricity to where it’s needed in big cities and small towns. Meanwhile, under-used railroad lines crisscross the country. As coal and oil use drop, those lines will be even more under-used, unless we change something. Yet, trains are more efficient than trucks even now, and would be much more so if electrified. So, we should run electricity lines along newly-improved railroad lines, and use some of the electricity to cleanly power a lot more trains.

By electrifying rail, you make rail less expensive as well as cleaner. With improvements to tracks you also make it faster. More freight and passengers find their way to rail. More jobs are produced in renewable energy. People living near trains get a cleaner and quieter environment. Traffic is lessened on highways, reducing accidents, deaths, injuries, and wear and tear on the roads. Electric trains cost less, take less maintenance, and last longer. Regenerative braking can produce still more power.

This is a solution to air pollution, but its benefits just keep piling up. Electric rail is like the hemp of infrastructure. Faster, more efficient trains would take freight from trucks and planes, and people from planes and cars. Electric trains start and stop more quickly and can run more closely together than diesel trains. They run better on grades. They can run much faster than current U.S. trains on existing upgraded tracks. Restoring or adding double tracks provides three to four times the capacity of a single track.

Unless you’re going all the way across the United States, for any shorter distance trip, a fast train from downtown to downtown is going to look mighty appealing when the alternative is a plane ride that involves: traveling to an exurban airport, being treated like a terrorism suspect, waiting hours, flying to an out-of-the-way city to wait additional hours switching planes, never being sure you’ll be on time, buying much more expensive tickets, squeezing into a tiny seat with no chance to walk around, airplane food instead of a dining car, lousy internet, obnoxious announcements, and the knowledge that you’re contributing mightily to the destruction of the earth’s climate.

Solutionary Rail lays out a plan for a just transition to the wind- and solar-topia it envisions, taking into consideration the rights of workers, of those living near the train lines, etc. Also in need of careful study, I think, is the protection of the health of passengers maintaining vicinity to high-voltage power lines. But there are major health concerns created by delaying the move to solutionary rail, and there are ways in which the notion of a just transition might be expanded beyond the vision of this book.

Hundreds of times more U.S. residents are killed each year in traffic accidents involving heavy trucks than are killed by foreign terrorism. Yet the United States uses the threat of foreign terrorism to justify dumping roughly $1 trillion per year into preparations for the wars that generate the threats of terrorism. If electric rail were part of a transition away from treating war as our primary public project and toward treating environmental protection as such, the scope of the vision would be radically enlarged.

Moyer et alia propose starting with a single rail line as a model project to attract more funding. They worry that 500 miles could cost $1.25 billion. They note that an 800-mile high-speed rail project in California is estimated to cost $68 billion. They propose public-private partnerships and incremental advances. Yet they also note that, as with so many other projects on which Europe and Asia now lead the way, the United States was a leader in electric railroads over a century ago. What gave highways the advantage in the United States was primarily a massive public investment in free highways.

Describing 800 miles of high-speed rail in California as “one of the most expensive public works projects in U.S. history,” as Solutionary Rail does, needs to be qualified. I would call it one of the most expensive public works projects that serves some useful purpose and is not dedicated to mass killing in U.S. history. The cost of that dinky little project is pocket change for the Pentagon. If you can run renewable electricity along 500 miles of electric train track for $1.25 billion, then for 10% of U.S. military spending (which has nearly doubled since 2001 during a “war on terrorism” that has increased terrorism) you could do 40,000 miles.

That would be a good start. Factor in the wars over oil we could forego. Factor in the reduced oil consumption by the military. Factor in the greater economic benefits of investing in clean energy versus military spending. The benefits just keep coming.

Solutionary Rail is a master plan. The railroad labor unions are already on board. The blurbs in the front of the book and Bill McKibben’s introduction claim both that it is a brand new idea and that everybody’s been doing it in Europe for a long time. I think that’s accurate. Most of the trains we enjoy riding in other countries are electric. The idea of having such things in the United States, and of using them as a way to harness unfathomable amounts of wind and sun power, is revolutionary.

When I ride the slow, expensive, internetless train up to the U.S. capital from Virginia, it runs on diesel. Then it sits in Union Station for a long time while they switch it over to electric before continuing north. Bringing electric south as well as north would be a very welcome development, in exchange for which I’d be willing to give up two or three or a couple of thousand military bases.