Disturbing the Peace presents a view of the Israel-Palestine conflict most Americans have never seen, but should familiarize themselves with.

A new film called Disturbing the Peace tells the story—unknown to most Americans but painfully familiar to others—of Israel and Palestine. Of the many films I’ve seen, this is one of the best. It presents both sides without equating them. It opens itself to a broad audience without boring anybody. 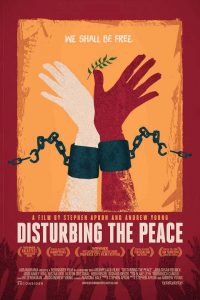 Disturbing the Peace presents personal stories of soldiers and of suicide bombers. You should come away understanding while opposing all of these stories.

In a nod to the power of other films, this film recounts how Palestinians in an Israeli prison watched the film Schindler’s List and found themselves sympathizing with the grandparents of their jailers, and then thinking about what that could mean.

We also see, in Disturbing the Peace, an Israeli whose eyes are opened, who gains the ability to see children, to recognize children, to appreciate the suffering of some of Israel’s victims—and then to cease participating.

We see an Israeli see courage, the courage of unarmed nonviolent Palestinians bringing blankets to those in need, at risk to their own lives.

Turn off your television. Avoid an election circus. Watch this film and see what you see.