Rumblings of Discontent in Saudi Arabia 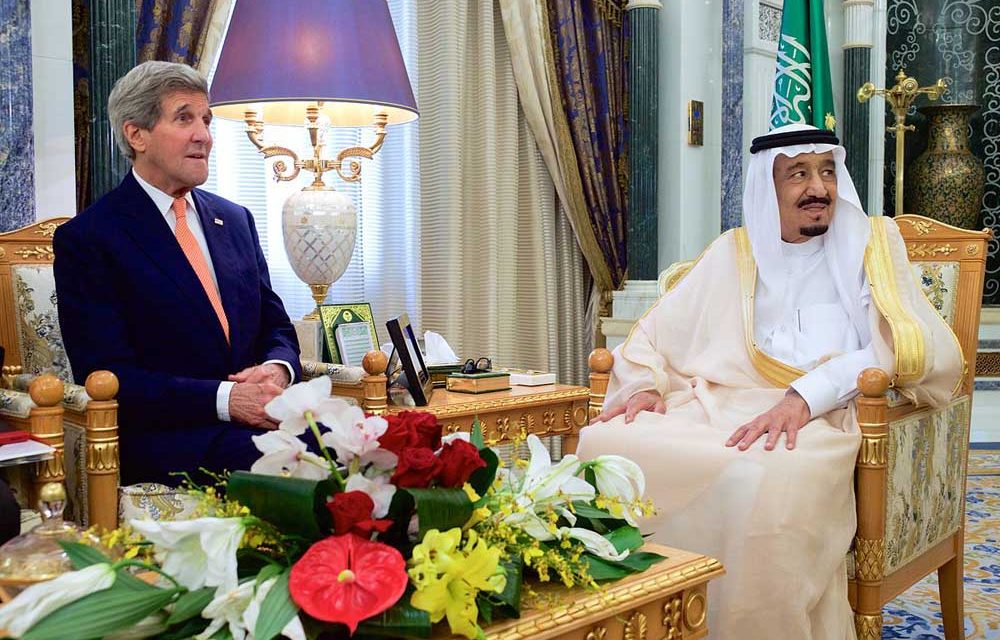 US Secretary of State John Kerry with King Salman bin Abdelaziz Al Saud of Saudi before a bilateral meeting at the Royal Court in Riyadh, Saudi Arabia, on May 7, 2015 (US State Department)

The rumblings of discontent are being heard, which could turn into serious problems for one of Pax Americana's most important vassals.

Discontent is brewing in Saudi Arabia, that bastion of reaction on the Arabian Peninsula, with the Saudi Royal Family seeing some of its worst internal dissent in decades.

The new King has endowed his favorite son with command of the Saudi military, amongst other major responsibilities, and now the Saudi people find themselves in a Vietnam-style quagmire in Yemen—something new to the Saudi people—that has seen Saudi blood being spilled, with another general, almost certainly from the royal family, killed whilst waging war.

Coupled with the drastic fall in oil revenue, which has seen the Kingdom forced  to make a cash withdrawal from its foreign accounts of up to $100 billion in recent weeks, money needed to cover the government’s deficit, and it seems the strain is beginning to take its toll.

How long the Saudi Kingdom can survive $40 (or maybe lower) per barrel of oil is the question, for the Family Saud may have spent above its means and not put enough into the rainy day fund.

The big picture for Saudi Arabia has had storm clouds hanging over its head since the Arab Spring started almost five years ago. The Shi’ite minority, whose homeland in the east includes most of the major oil fields, have been suppressed, and it seemed the storm clouds had passed.

Then the aged monarch finally passed away and a new King was coronated, an act complete absent from the Holy Koran. The King anointed his favorite son to be his right hand and the disaster in Yemen was launched. Saudi and Emirate troops have finally set foot on Yemeni soil and the battle for the capital Sana’a seems to have begun.

Already a well-aimed rebel-launched North Korean scud missile hit an ammunitions dump in Aden and dozens of sons of Wahhabi were killed, and now the Saudi news grows  hesitant to tell the full story of the mounting casualties.

And then the construction crane crashes in the heart of Islam crushing over a hundred, and now the thousand or more trampled to death in the latest stampede and wiser heads in the Saudi Royal family have begun to speak out against the incompetence of their blood relations.

With the Iranian victory in the nuclear agreement with the USA, and Putin forcing the USA into a very begrudging alliance over Syria, the Saudi Royal family has good reason to be nervous, for the Iranian “snakes” are riding high all the while the Wahhabists find themselves hemorrhaging cash and Saudi blood.

With the mass starvation beginning to rage in Yemen, international opinion, until now ignorant of this fact due to a news white out by the western media, will inevitably turn against the Saudi invasion and Obama, and the next in line to the Pax Americana throne will be stuck in a very tricky spot.

It’s bad enough trying to defend, and justify, a regime that has beheaded more people then ISIS this year, let alone the damaging images of starving Yemeni children on television screens around the world, starvation entirely due to the Saudi aid blockade, and the US Empire will find its own people pressuring it to end its indispensable role in the War on the Yemeni People.

The house of Saud has been a conservative one and avoided disastrous foreign interventions until now. The War in Yemen will only sour Saudi public opinion of the regime and has the potential, if gone bad enough, to spark a coup d’etat by the non-royal military leadership, something the Family Saud has long feared the most.

It seems the crashing price of oil could do the most damage to the regime, especially if they don’t have enough liquidity to meet the Kingdom’s  massive budget deficit, something only expected to worsen.

If the regime has to make significant domestic cuts, which have to be inevitable, grumbling will increase and the bought and paid for obedience of the Saudi people may no longer be taken for granted.

Again, the major threat to the regime is a military mutiny, something the incompetence of the King’s Defense Minister/son could eventually trigger.

Let’s face it, the Houthis are not about to lay down their arms and accept Saudi conquest, and being a battle hardened lot going back a decade or more, the fight for the Yemeni capital Sana’a is going to be brutal. And even when Sana’a falls, the Houthis will retreat back to the rugged terrain of their tribal lands and wage a very debilitating guerilla war against the occupying Wahhabi army. They call it a quagmire for good reason, for as the Egyptian Army learned so painfully back over fifty years ago, getting in the middle of Yemen’s tribes will only bring disaster.

Whether a palace coup is being organized in Saudi Arabia is still only conjecture, but the rumblings of discontent are being heard, rumblings which could turn into serious problems for one of Pax Americana’s most important vassals in one of the most critical regions on the planet.