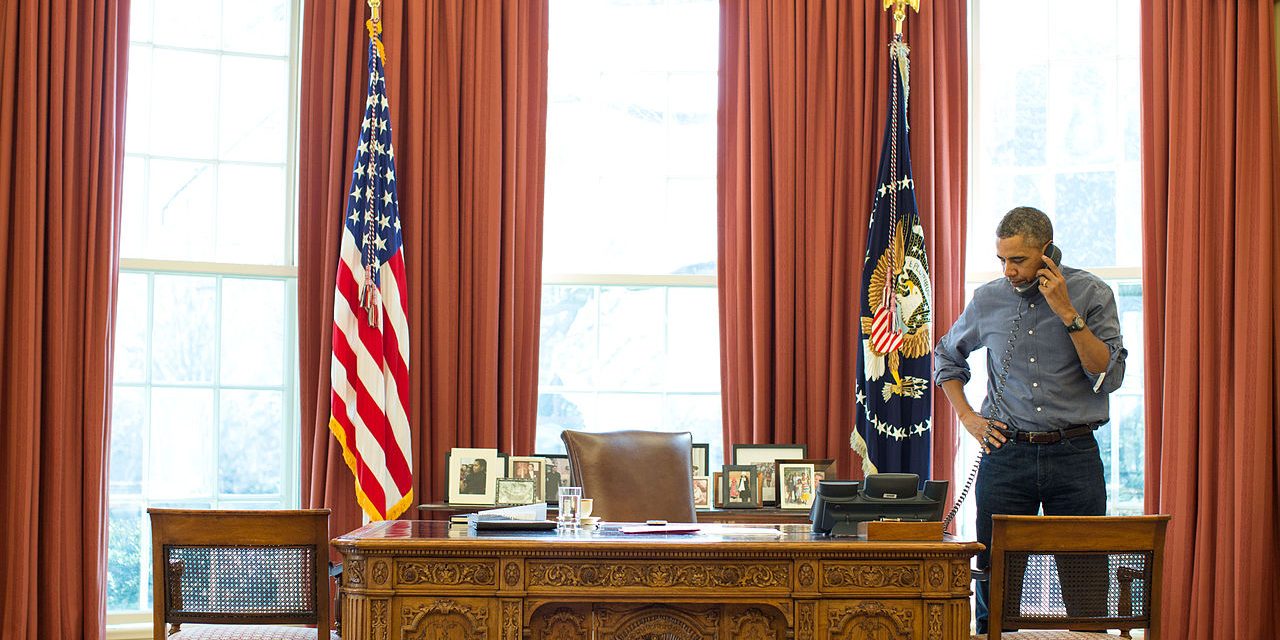 President Barack Obama talks on the phone in the Oval Office with Russian President Vladimir Putin about the situation in Ukraine, March 1, 2014. (Pete Souza/White House)

Has Putin launched a revolution that will overthrow the world’s subservience to Washington?

We can no longer tolerate the state of affairs in the world.”  — Russian President Vladimir Putin

On September 28, 2015, the world saw the difference between Russia and Washington. Putin’s approach is truth-based; Obama’s is vain boasts and lies, and Obama is running out of lies.

By telling the truth at a time of universal deceit, Putin committed a revolutionary act. Referring to the slaughter, destruction, and chaos that Washington has brought to the Middle East, North Africa, and Ukraine, and the extreme jihadist forces that have been unleashed, Putin asked Washington: “Do you realize what you have done?”

Putin’s question reminds me of the question Joseph Welch asked witch-hunting Senator Joseph McCarthy: “Have you no sense of decency?”  Welch’s question is attributed with initiating the decline of McCarthy’s career.

Perhaps Putin’s question will have the same impact and bring the reign of “American Exceptionalism” to an end.

If so, Putin has launched a revolution that will overthrow the world’s subservience to Washington.

The world sees that it is Washington and its vassals who “violate international norms” and not Russia.

The sanctimonious self-righteousness, behind which hides Washington’s self-serving unilateral actions, is revealed for all to see.

Washington relies on its arsenal of lies.  Washington’s media-based disinformation apparatus was too hot to trot.  Just as the BBC’s TV reporter announced the premature destruction of World Trade Center Building 7 on 9/11 with the building clearly still standing in the background, Washington’s lie service announced the first civilian casualties of Russian air strikes “even before our planes got in the air,” noted President Putin in his comments on Washington’s disinformation warfare.

As a consequence of their subservience to Washington, the puppet states of Europe are being overrun by refugees from Washington’s wars that Europe so mindlessly enabled.  As the cost of being Washington’s vassals comes home to Europeans, the standings of European political parties will be affected.  New parties and ruling coalitions are likely to follow more independent paths in order to protect themselves from the costs of the enormous mistakes that flow from Washington’s arrogance and hubris.

The breakup of the Empire is on the horizon.