The Crying of Flight 655: The Washington Post and the Whitewashing of a War Crime 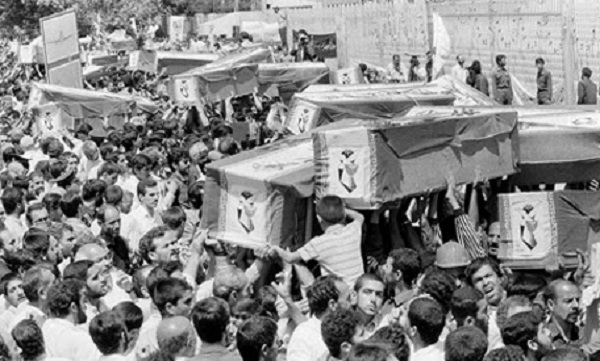 Mourners carry coffins through the streets of Tehran, July 7, 1988, during a mass funeral for victims who died when Iran Air Flight 655 was blown out of the sky by the USS Vincennes. (Associated Press) 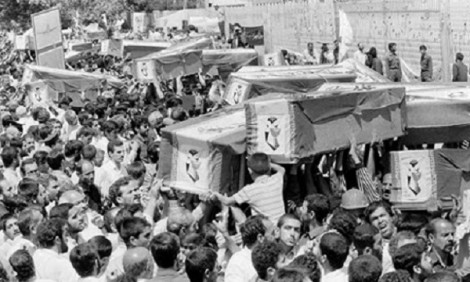 Mourners carry coffins through the streets of Tehran, July 7, 1988, during a mass funeral for victims who died when Iran Air Flight 655 was blown out of the sky by the USS Vincennes.
(Associated Press)

Here’s how Washington Post foreign affairs blogger Max Fisher tells the story—virtually unknown here in the United States—of the downing of Iran Air Flight 655, which occurred 25 years ago during the Iran-Iraq War:

Toward the end of the war, on July 3, 1988, a U.S. Navy ship called the Vincennes was exchanging fire with small Iranian ships in the Persian Gulf. The U.S. Navy kept ships there, and still does, to protect oil trade routes. As the American and Iranian ships skirmished, Iran Air Flight 655 took off from nearby Bandar Abbas International Airport, bound for Dubai. The airport was used by both civilian and military aircraft. The Vincennes mistook the lumbering Airbus A300 civilian airliner for a much smaller and faster F-14 fighter jet, perhaps in the heat of battle or perhaps because the flight allegedly did not identify itself. It fired two surface-to-air missiles, killing all 290 passengers and crew members on board.

Fisher—who based his post on a new TIME magazine piece noting a number of valid Iranian grievances with the West—writes that the “horrible incident” helped cement Iranian enmity toward the United States government, but intimates that the whole episode was just a random mistake, an innocent fluke, albeit with tragic and long-lingering consequences. To this end, he quotes notorious war propagandist Kenneth Pollack of the Brookings Institute’s Saban Center, presumably because Pollack was the most high-profile serial fabricator Fisher could find with a quick Google search of “Iran Air Flight 655” and “accident.”

Quoting from Pollack’s 2004 compendium of conventional wisdom and glaring inaccuracies, “The Persian Puzzle,” Fisher adds, “The shoot-down of Iran Air flight 655 was an accident, but that is not how it was seen in Tehran. The Iranian government assumed that the attack had been purposeful… Tehran convinced itself that Washington was trying to signal that the United States had decided to openly enter the war on Iraq’s side.”

Fisher recounts this story in order to explain why Iranian officials and diplomats might not view their American counterparts as trustworthy interlocutors when it comes to diplomacy over its nuclear program. He writes, “If Iran believes that the United States is so committed to its destruction that it would willingly shoot down a plane full of Iranian civilians, then Tehran has every incentive to assume we’re lying in negotiations.”

Yet, both Pollack’s explanation and Fisher’s insinuation grossly decontextualize and sanitize the American role in the later stage of the Iran-Iraq War in general, and the destruction of Flight 655 in particular. To claim that—in mid-1988, no less—Tehran had to somehow “convince itself” that the Reagan administration was merely signaling its entrance into the war as a combatant, in aggressive and lethal support of Saddam Hussein’s Iraq, is bizarre. Iran didn’t have to invent such a scenario; it was already an established fact.

Beyond training Iraqi troops, providing intelligence and shipping arms to Iraq, and facilitating the use of chemical weapons against Iranian civilians, by 1987 the U.S. military was also helping Iraq “carry out long-range strikes against key Iranian targets, using U.S. ships as navigational aids,” according to Barry Lando in his book, “Web of Deceit: The History of Western Complicity in Iraq, from Churchill to Kennedy to George W. Bush.”

The purpose of this kind of American firepower in the Persian Gulf was clear. Lando writes, “Their mission was to destroy any Iranian gunboats they could find. Other small, swift American vessels, posing as commercial ships, lured Iranian naval vessels into international waters to attack them. The Americans often claimed they attacked the Iranian ships only after the Iranians first menaced neutral ships plying the Gulf. In some cases however, the neutral ships which the Americans claimed to be defending didn’t even exist.”

By August 1987, the U.S. Navy was conducting direct military attacks on Iranian aircraft and sea vessels. In early August, the Financial Times reported that “a carrier-borne F-14 Tomcat fighter unleashed two missiles at an Iranian jet spotted on its radar which had flown too close for comfort to an unarmed US surveillance aircraft.” On September 23 of that year, the Washington Post reported, “U.S. Navy commandos yesterday boarded and captured the Iranian navy ship that was attacked by American helicopters Monday in the Persian Gulf,” killing three Iranian sailors. An additional 26 Iranian crew members were detained. The same day, “the U.S. frigate involved in the attack fired warning shots at an Iranian hovercraft as it sped toward U.S. warships gathered near the disabled Iranian vessel, officials said.”

A few weeks later, in early October, three Iranian ships were sunk by the U.S. Navy; later that month the Americans attacked two Iranian oil platforms. In April 1988, not only did a U.S. warship fire missiles at Iranian jets over the Persian Gulf, but two more oil platforms were destroyed and at least six Iranian ships were either crippled or sunk by American naval forces.

Then, on July 3, 1998, shortly after taking off from Bandar Abbas on the southern coast of Iran, the Dubai-bound Iran Air Flight 655 was blown out of the sky on the orders of U.S. Navy Commander William C. Rogers III of the USS Vincennes, a Ticonderoga class AEGIS guided missile cruiser. The two surface-to-missiles fired at the Iranian Airbus A300B2, a commercial flight that traveled along the same route every morning, obliterated the aircraft in broad daylight, killing all 290 civilians on aboard, including 66 children under the age of 12.

In a statement issued soon after the attack, U.S. President Ronald Reagan called the incident “a terrible human tragedy,” but justified it as “a proper defensive action by the U.S.S. Vincennes” after “the aircraft failed to heed repeated warnings.”

Reporting on the downing of Iran Air Flight 655 an Associated Press report claimed on July 3, 1988 that the “Pentagon said U.S. Navy forces in the gulf sank two Iranian patrol boats and downed an F-14 fighter jet in the Strait of Hormuz on Sunday during an exchange of fire.” Iran disputed this version of events, insisting that plane attacked had been a civilian airliner and that nearly 300 civilians on board had been killed in the assault. AP noted, “U.S. Navy officials in the gulf denied the Iranian claim.”

In reaction to Iranian statements, President Reagan reportedly quipped, “Well, I don’t go by what the Iranians say, ever.”

Following the attack on Flight 655, Admiral William J. Crowe Jr., Chairman of the Joint Chiefs of Staff, outlined what he called the “threatening flight profile” of the airplane the U.S. Navy ship had blown up. He told reporters that the Iranian plane had been “outside the prescribed commercial air corridor,” that it “headed directly for Vincennes,” that “there were electronic indications on Vincennes that led it to believe that the aircraft was an F-14” and that the plane was “decreasing in altitude as it neared the ship.”

Crowe also maintained that the Vincennes, which according to the Washington Post at the time “was equipped with the most sophisticated radar and electronic battle gear in the Navy’s surface arsenal,” was “outside of Iranian territorial waters” when it fired at the Iranian aircraft.

“We do have some eyewitness reports that saw the vague shape of the aircraft when the missile hit,” Crowe told reporters, “and it looked like it disintegrated.” He also defended Commander Rogers’ actions as “logical”, saying, “The commanding officer conducted himself with circumspection and, considering the information that was available to him, followed his authorities and acted with good judgment at a very trying period and under very trying circumstances.”