Egypt After the Coup: Is Obama Backing ElBaradei? 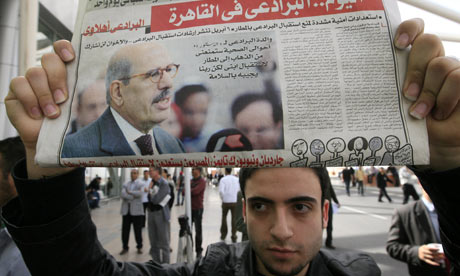 Beirut — According to well-connected Washington sources, including a Congressional staffer whose job description includes following political events in Egypt, once it became evident that Egyptian President Mohamed Morsi might well be ousted by Egypt’s Supreme Council of the Armed Forces (SCAF), it did not take Mohamed Mustafa ElBaradei, the Sharia legal scholar, Nobel Peace Prize Laureate, and for 12 years (1997-2009) the Director General of the International Atomic Energy Agency (IAEA) very long to contact the Washington, DC law firm of Patton Boggs.

That was this past Tuesday. The very next day, ElBaradei’s representatives reportedly also made contact with the Conference of Presidents of Major American Jewish Organizations which claims to represent the 52 largest American Jewish groups. ElBaradei, perhaps the current front-runner to replace his long-time nemesis, Mohamed Morsi, moved fast to organize some key allies in Cairo and Washington to pick-up where his earlier failed Presidential campaign left off in January 2011.

Patton Boggs, the K Street, NW Washington DC law firm, which last year had 550 lawyers and 120 lobbyists and is arguably the firm closest to the White House and most likely to secure for its clients what they want from the approximately 5,000 key decision makers in the US Capitol. The other nearly 11,800 federally registered lobbyists in Washington (there were only 300 as recently as when Lyndon Johnson was US President) lag far behind Patton Boggs in terms of political influence.

Patton Boggs’ new client wants the Pentagon and the White House to squeeze Egypt’s Supreme Council of the Armed Forces (SCAF) who deposed President Morsi and arrange for himself to be appointed the interim President of Egypt pending early elections.

What ElBaradei’s representatives are reportedly offering the White House in exchange for Obama’s discrete assistance is that the 1979 Camp David Accord, including all its elements, will be observed. In addition, Egypt under ElBaradei can be expected to toughen its stance on Iran’s nuclear program including publicly adjusting some of his pre-2012 comments on Iran that the White House and Israel criticized as being “soft on the Islamic Republic.”

Also being promised by ElBaradei’s agents is that security cooperation between Egypt and Israel will grow stronger. ElBaradei’s objective is to secure Barack Obama’s personal support during his jockeying for the expected forthcoming Egyptian presidential election.

Once again the Obama administration was caught by surprise as the “Arab spring,” still in its infancy, increasingly portends ill for Western-installed potentates in all the Sykes-Picot artificially created “countries.” According to Congressional insiders, Obama reportedly has some doubts. Those following events in Egypt will likely recall his praise of Morsi after the two former University Professors had a chance to sit together and get to know one another. “I like this man,” Obama reportedly told some staff members, “he thinks like me.”

When Morsi was deposed, Obama lamented: “We are deeply concerned by the decision of the Egyptian armed forces to remove President Morsi and suspend the Egyptian constitution. I now call on the Egyptian military to move quickly and responsibly to return full authority back to a democratically elected civilian government as soon as possible through an inclusive and transparent process, and to avoid any arbitrary arrests of President Morsi and his supporters.”

Meanwhile, the SCAF, at the urging of ElBaradei’s team, is paying sweet lip service regarding Obama’s expressed concerns. Shortly before the words were uttered by Minister of Defense, Brig. Gen. Abdel Fattah al-Sisi, the State Department received a copy of the speech with the first paragraph highlighted to assuage Obama: “The armed forces will not interfere in the realm of politics or governance and will not overstep the role that it is assigned in a democracy, which stems from the desire of the people.” Those words sound good also in Foggy Bottom.

Patton Boggs’ talking points to the Congress and Obama Administration are that President Morsi had more than a year to show progress to the Egyptian people, with both institutional political legitimacy derived from their election victories, and that he enjoyed strong popular support when he assumed full power from the armed forces in June 2012 but that he failed badly and the new government—hopefully led by ElBaradei—will now act more efficiently to move the country towards credible and legitimate institutions of governance.

ElBaradei’s campaign, as reported in the July 4th edition of the New York Times also worked hard to convince the White House of what he called the necessity of forcibly ousting President Morsi, presenting several arguments that included documentation that Morsi had bungled the country’s transition to an inclusive democracy and wasted a year without following thru on any of his pledges.

Some Congressional analysts believe that one of Morsi’s biggest mistakes resulted from a deliberate policy of accommodation and not, as is commonly believed, confrontation. He allowed the military to retain its corporate autonomy and remain beyond civilian control. Furthermore, he included in his cabinet a large number of non-Muslim Brotherhood figures who abandoned him within months when the going got tough, thus presenting to the public an image that the government was on the verge of collapse.

Some have suggested that Morsi should have brought the military to heel soon after he assumed power and was at the height of his popularity, just as the military was at its lowest point in public perception. Monday morning quarterbacking is now rampant to explain Morsi’s failures.

What the Muslim Brotherhood and Mohammad Morsi’s supporters do in the coming days at Tahir Square and across Egypt will likely determine the route and the ultimate success of ElBaradei’s growing juggernaut.

Meanwhile, as of today, it appears that President Barack Obama may well help usher Mohammad ElBaredei into Egypt’s Presidential Palace. If the Obama administration has success there will be joy in Tel Aviv, and at Patton Boggs’ victory party, where a good number of the invited guests will almost certainly be carefully vetted by AIPAC.