Stasi in the White House 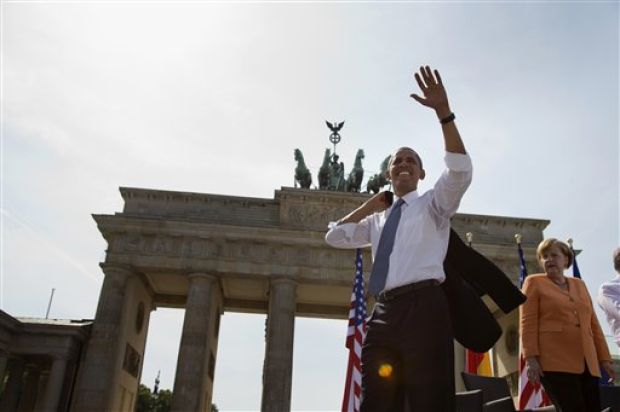 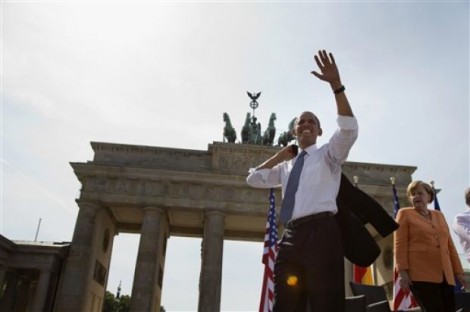 On June 19, 2013, US President Obama, hoping to raise himself above the developing National Security Agency (NSA) spy scandals, sought to associate himself with two iconic speeches made at the Brandenburg Gate in Berlin.

Obama’s speech was delivered to a relatively small, specially selected audience of invitees.  Even so, Obama spoke from behind bullet proof glass.

Obama’s speech will go down in history as the most hypocritical of all time. Little wonder that the audience was there by invitation only. A real audience would have hooted Obama out of Berlin.

Perhaps the most hypocritical of all of Obama’s statements was his proposal that the US and Russia reduce their nuclear weapons by one-third.  The entire world, and certainly the Russians, saw through this ploy. The US is currently surrounding Russia with anti-ballistic missiles on Russia’s borders and hopes to leverage this advantage by talking Russia into reducing its weapons, thereby making it easier for Washington to target them.  Obama’s proposal is clearly intended to weaken Russia’s nuclear deterrent and ability to resist US hegemony.

Obama spoke lofty words of peace, while beating the drums of war in Syria and Iran. Witness Obama’s aggressive policies of surrounding Russia with missile bases and establishing new military bases in the Pacific Ocean with which to confront China.

The tyrant’s speech of spectacular hypocrisy elicited from the invited audience applause on 36 occasions.  Like so many others, Germans proved themselves willing to be used for Washington’s propaganda purposes.

Here was Obama, who consistently lies, speaking of “eternal truth.”

Here was Obama, who enabled Wall Street to rob the American and European peoples and who destroyed Americans’ civil liberties and the lives of vast numbers of Iraqis, Afghans, Yemenis, Libyans, Pakistanis, Syrians, and others, speaking of “the yearnings of justice.” Obama equates demands for justice with “terrorism.”

Here was Obama, who has constructed an international spy network and a domestic police state, speaking of “the yearnings for freedom.”

Here was Obama, president of a country that has initiated wars or military action against six countries since 2001 and has three more Muslim countries–Syria, Lebanon, and Iran–in its crosshairs and perhaps several more in Africa, speaking of “the yearnings of peace that burns in the human heart,” but clearly not in Obama’s heart.

Obama has turned America into a surveillance state that has far more in common with Stasi East Germany than with the America of the Kennedy and Reagan eras. Strange, isn’t it, that freedom was gained in East Germany and lost in America.

At the Brandenburg Gate, Obama invoked the pledge of nations to “a Universal Declaration of Human Rights,” but Obama continues to violate human rights both at home and abroad.

Obama has taken hypocrisy to new heights. He has destroyed US civil liberties guaranteed by the Constitution.  In place of a government accountable to law, he has turned law into a weapon in the hands of the government.  He has intimidated a free press and prosecutes whistleblowers who reveal his government’s crimes. He makes no objection when American police brutalize peacefully protesting citizens. His government intercepts and stores in National Security Agency computers every communication of every American and also the private communications of Europeans and Canadians, including the communications of the members of the governments, the better to blackmail those with secrets.  Obama sends in drones or assassins to murder people in countries with which the US is not at war, and his victims on most occasions turn out to be women, children, farmers, and village elders. Obama kept Bradley Manning in solitary confinement for nearly a year assaulting his human dignity in an effort to break him and obtain a false confession. In defiance of the US Constitution, Obama denied Manning a trial for three years. On Obama’s instructions, London denies Julian Assange free passage to his political asylum in Ecuador.  Assange has become a modern-day Cardinal Mindszenty.  [Jozsef Mindszenty was the leader of the Hungarian Catholic Church who sought refuge from Soviet oppression in the US Embassy in Budapest. Denied free passage by the Soviets, the Cardinal lived in the US Embassy for 15 years as a symbol of Soviet oppression.]

This is the Obama who asked at the orchestrated event at the Brandenburg Gate: “Will we live free or in chains? Under governments that uphold our universal rights, or regimes that suppress them? In open societies that respect the sanctity of the individual and our free will, or in closed societies that suffocate the soul?”

When the Berlin Wall came down, the Stasi Spy State that suffocates the soul moved to Washington. The Stasi is alive and well in the Obama regime.