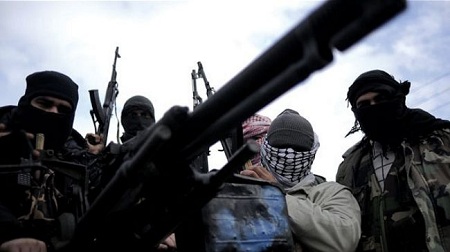 Armed rebels in Syria. The New York Times has called Al-Qaeda “one of the uprising’s most effective fighting forces”. (Photo: Press TV)

A recent editorial in the New York Times titled “The Syrian Refugee Crisis” offers several examples of how the newspaper of record serves as a propaganda outlet to manufacture consent for U.S. foreign policy. It begins:

More than 60,000 innocent civilians have been slaughtered in President Bashar al-Assad’s desperate bid to retain power in Syria. In the two-year reign of terror, he has also forced staggering numbers of Syrians to relocate within the country or flee across the border, creating a disaster that is threatening to destabilize the region.

Take first the claim that over “60,000 innocent civilians” have been killed in the conflict. This number has been widely cited since a report commissioned by the U.N. Office of the High Commissioner for Human Rights (OHCHR) was released at the beginning of this month. The report, titled “Preliminary Statistical Analysis of Documentation of Killings in the Syrian Arab Republic”, relied upon seven databases, six from “Syrian human rights monitors”—including opposition groups like the Syrian Observatory for Human Rights—and one from the Syrian government. The number arrived at was “58,648 unique killings”—that is all “killings that are fully identified by the name of the victim, as well as the date and location of death”, and, contrary to what the Times falsely claims, not civilian deaths only.  The estimate in fact does not distinguish between civilians, Syrian soldiers, or rebel combatants at all.

Next take the suggestion that the refugee crisis is fully the responsibility of Assad—as though there were not two sides engaged in violence in the conflict. Certainly, government forces are responsible for heinous crimes and many Syrians have indeed fled out of fear of regime violence, such as indiscriminate shelling and bombing. But the Times completely ignores the role of the armed rebels in escalating the violence that has created the refugee crisis. Der Spiegel has reported, for example, on how Syria’s “minority Christian population is suffering under attacks waged by rebel troops”, with many fleeing into Lebanon. Women told of their husbands who were “killed by Syrian rebel fighters” simply “because they were Christians”. Last month, the U.N. warned that the conflict in Syria was becoming “overtly sectarian” in nature in a report that “cited evidence of massacres by pro- and anti-government militias” (emphasis added). The Times has itself reported, for example, how rebel fighters—“the most effective among” whom “are extremists aligned with Al Qaeda”—had begun launching attacks on ethnic Kurds, commenting on the “already materializing” fear “that Syria’s ethnic groups will take up arms against one another in a bloody, post-Assad contest for power.” The Times has also reported how the rebels “are losing crucial support from a public increasingly disgusted” by their actions, including “senseless destruction, criminal behavior and the coldblooded killing of prisoners”, as well as the “growing use of large bombs that kill bystanders”—violence the Times would refer to as “terrorism” if committed by, say, the Taliban in Afghanistan, rather than by U.S.-backed rebel forces against a regime it is seeking to overthrow.

Further down the page, the editorial states that

Many Syrians have fled because of bombings by army troops, still others because of sexual violence. According to the International Rescue Committee, refugees identified rape — including gang rapes in front of family members — as a “primary reason” for fleeing.

Given the context, the implication is that government troops are responsible for all such rapes. But the IRC report cited states that rapes are being committed by “armed men”, which could include rebel fighters as well as government soldiers. Sister Agnes-Mariam de la Croix—who herself fled Syria fearing for her life—has criticized the West for “supporting extremists” whose crimes have included murder, kidnapping, and rape. As The National (UAE) has noted, “Even the best-disciplined armies have been accused of looting, rape and other crimes. And the Free Syrian Army is far from well-governed….”

The Times editors go on to brag how the U.S. is one of “the two top donors” (the other being the E.U.) to the U.N. High Commissioner for Refugees (UNHCR) before calling Persian Gulf states—presumably including the U.S.’s allies in arming the jihadists—“laggards” and concluding that

More is also required of Russia and China, which have enabled Mr. Assad in his brutal war but done little to help his victims.

Never mind the fact that the U.S.—unlike Russia and China—has been actively working to foment civil war in Syria, with the CIA coordinating the flow of arms to rebel forces, whose ranks include foreign jihadists, with Al Qaeda’s Nusra Front (an offshoot of Al Qaeda in Iraq) taking on a key role, being what the Times has previously called “one of the uprising’s most effective fighting forces”, and with “[m]ost of the arms” funneled by the CIA to the rebels from Saudi Arabia and Qatar “going to hard-line Islamic jihadists”, as the Times has also previously noted.

If more is required of Russia and China to assist the plight of refugees from the conflict in Syria, a great deal less, it would seem, is required of the U.S.