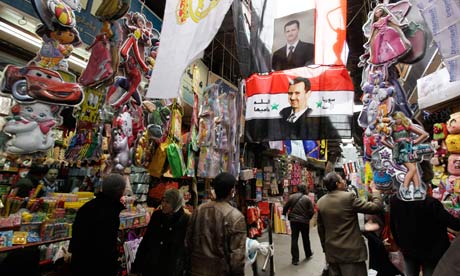 What a difference a week can make. The heaviest snow in Syria in a quarter-century, some claimed, last week’s storm closed for a time even the main highway from Damascus to Beirut.

But that was then, and now it’s spring in Damascus, or so it feels to those of us used to New England Januarys. It’s nearly downright balmy here. Spring flowers are bursting out all over, and the city parks are crowded with mothers pushing baby carriages, kids playing, and young lovers cooing softly on the park benches. Park workers are raking the dead leaves and others trimming the palm trees and piling the branches neatly on flatbed trucks.

What “civil war”? What “crisis”? One is tempted to ask oneself, even though there continues to be intermittent “thuds” and a jet streaking overhead now and then en route apparently to one of the suburbs where clashes erupt intermittently.

It’s been a rough winter, and perhaps we are just experiencing here a false spring. Yet one senses a palpable sigh of relief and even some optimism while talking to citizens, NGO staffers, and some officials. It could be partly the wonderful weather, but perhaps also a realization that a corner may have been turned, peace and security will be restored, and the killing ended. Some refugees are to be seen returning to Damascus. Syrians and Palestinians from Lebanon — yet there are still traffic backups with cars piled high with personal belongings crossing over to Lebanon at the Masnaa border checkpoint. Meanwhile the Ministry of Interior in Damascus has pledged various forms of help to those who heed the governments call to “come back home to your people.”

Energized by the exhilarating park ambiance this observer decided to walk to UNESCO headquarters for an appointment. Plus it can be kind of tough at times to find a taxi these days.

Perhaps I should have remained in the park. Lord knows that this observer has experienced his share of irate women shouting at him over the years. Being raised by three older sisters and a no-nonsense German/Italian mother—all of them unmercifully wanting to correct my behavior—was a mere harbinger of things to come. But, even with this “training”, I was ill prepared for what the lady at the UNESCO office here in central Damascus unleashed on me.

And I had not done the lady wrong.

Except, perhaps, that I happen to be an American and there is plenty of anger here among the Syrian public, the NGO’s, and increasingly the international legal community among others — not toward the American people but toward the US government — over the effects of its sanctions which are severely and illegally targeting the civilian population. At the same time, they are directly contributing to prospects of irreparably damaging many of this millenary country’s historic sites.

According to archeological experts here, Syria, with its six UNESCO world heritage sites testifying to its deserved reputation as being one of the most archeologically well-preserved cradles of civilization, may soon to be the most wantonly destroyed in modern times (Iraq being the other). This frequently-predicted catastrophe is a result, not only of war in the usual sense, but war in its more subtle form of US-led sanctions aimed at political regime change.

Of particular concern to UNESCO, whose UN mandate includes registering and protecting World historical sites, is the preservation of the Ancient Cities of Damascus, Bosra, Palmyra, Aleppo, Crac des Chevaliers and Qal’ at Salah El-Din, as well as the ancient villages of Northern Syria.

This week, the Syrian Directorate of Antiquities and Museums has released its detailed report of acts of vandalism and illegal excavations by armed groups and foreign thieves across Syria. The Directorate has documented violations against archeological sites and Syrian museums, as well the emerging phenomenon of artifact forgery. In Aleppo, the Antiquities division reported that al-Diriya caves in Samaan Mountain suffered from acts of sabotage, adding that “terrorists have looted the equipment of excavations, wooden columns and timbers.”

Also, this week, Human Rights Watch issued a report that Saudi-Qatar-US backed militants destroyed religious locations following a four-day investigation in the provinces of Latakia and Idlib. According to HRW, a Husseiniyah (a congregation hall for Shia commemoration ceremonies) was destroyed by the militants in Idlib, while two Christian churches were looted in Latakia. The Middle East director at the Human Rights Watch, Sarah Leah Whitson claimed that Syria “will lose its rich cultural and religious diversity if armed groups do not respect places of worship.”

Against this backdrop, it is not totally surprising that my UNESCO hostess, less than half a minute after I entered her office, literally threw at me a statement in French from Director Irina Bokova of the UNESCO HQ in Paris. It read:

“I am deeply distressed by the daily news about the escalation of damage to cultural heritage throughout Syria. We saw damage to the Citadel in July and the souks ten days ago, and the Umayyad Mosque, heart of the religious life of the city, one of the most beautiful mosques in the Muslim world, is being severely endangered. In Northern Syria, the region of the Ancient Villages inscribed on the World Heritage List in 2011 is heavily struck and it seems that the invaluable Saint-Simeon Byzantine complex might have been torched.”

Before I could finish reading, the lady exclaimed: “These testimonials from the past…!” raising her voice and glaring at me while pointing to the posters of Syrian historical sites on her wall, “the destruction of this heritage for which your sanctions are partly responsible. Your government is responsible today and will be tomorrow, for the whole of humanity.” When I was eventually able to get a word in sideways, I explained that I had come to her office precisely because I have been studying the immoral, illegal and “un-American” sanctions and that I was spending my time in Syria learning first-hand about the sanctions’ utter disregard for the humanitarian concerns of the Syrian people — in contravention to what one hears repeatedly from US officials.

When I added that I don’t know any Americans who would condone what the Congress and our government have been doing, if they knew the facts on the ground, she did calm down a bit and said she understood what I was saying and more or less agreed. She then mentioned a national poll conducted on 13 January by the Better World Campaign, an organization that works to support U.S.-U.N. relations, that showed that 83 percent of US citizens believe it is important that their country provide funding to UNESCO and want the US to lift its sanctioning of UNESCO and pay its withheld budget contribution, which accounts for 22% of the UN specialized agency’s budget.

“Let me tell you something!” she exclaimed and launched into describing the dire effects of the current US-led sanctions on UNESCO’s work in preserving and protecting historical sites. In her view, the American assault on UNESCO and its work began when UNESCO committed a sin in March of 2011 by admitting Palestine as a full member.

She explained: “For months our offices had been warned by Israeli officials and then Americans, that there would be a big price-tag were we to admit Palestine.” And there was. In October 2011, the U.S. cut off funding to UNESCO as payback for admitting Palestine as a member and in November 2012, the United States was one of nine member states out of 193 in the General Assembly who, on behalf of the Zionist occupiers of Palestine, tried to unsuccessfully bar Palestine from gaining non-member observer state status at the UN.

UNESCO and some other NGO staff here claim that much of the damage here could have been prevented if there was a lifting of the US 2011 cut-off of UNESCO’s budget. As a direct result, UNESCO cannot even replace more than 400 staffers who left from normal attrition or even hire “neighborhood watch,” local volunteer personnel, to coordinate the guarding by of many archeological sites around Syria.

Regarding the other layers of US-led sanctions targeting the civilian population here, a survey by NGO’s on the impact of the fake “medicine and foods” exemptions will soon be released. Its indictment of the US-led sanctions is severe. Contrary to Washington and NATO mythology, the “medicine and foods” exemptions do not exist in reality because suppliers of both fear being accused of violating the great number of sanction details. Washington and Brussels are acutely aware of this fact.

Among the data that will be presented in the soon-to-be released analysis, are cases of cancer patients who need weekly medicines but are now only able to receive them twice a month, with the expected dire consequences. The same obtains for many other long term care patients who need specific medicines, even as generic as penicillin, which are no longer available as they were before the US-led sanctions.

Just as I was preparing to leave her office, she softened a bit and asked this observer. “See here, I generally like Americans who we come in contact with here but how can you explain these sanctions — or those in Iraq or Afghanistan that have killed so many?”

I tried to explain that we have a culture clash in America that means that many Americans overwhelmingly support UNESCO and the work of all sixteen of the UN Specialized Agencies but we also have politicians like Arizona Senator John McCain and South Carolina Senator Lindsay Graham who never saw a war they did not like. The former just returned from another visit to the region and apparently learned nothing except that he still wants a military solution.

The latter, who is known for his jokes on Capitol Hill that as a “true southerner” he never got over the American Civil War or what it did to American society, has repeatedly expressed his view of US “economic” sanctions by declaring recently, “Sanctions are good but they need to be tougher! Cut the bastards off at the knees.”

Senator Graham also noted his agreement with former U.S. Secretary of State Madeleine Albright who made the repulsive statement that the deaths of 500,000 children in Iraq from a US “economic sanctions” regime that “exempted foods and medicine” but in reality was a starvation program “was worth the price.”

Ironically, it was the arch-nemesis of the Confederacy, Yankee General William Tecumseh Sherman, who might agree with Graham regarding sanctions against a civilian population. What has bothered Senator Graham since he first studied the Civil War in school, according to one Congressional source, is that the Yankee February 17, 1865 captured Graham’s state capital of Columbia, South Carolina. It was not pretty and most of the central city was destroyed. But the Yankee and the Confederate might just agree on targeting civilian populations with economic sanctions. Wrote Sherman, shortly before his March to the Sea which fatally cut the south in two:

“We are not fighting against enemy armies, but against an enemy people, young and old, rich and poor, and they must feel the iron hand of war in the same way as organized armies.”

I left the UNESCO office sort of crestfallen. Not because of the lady’s roughness with me, but rather because of the realization, yet once again, that our species quite simply does not learn much from history and apparently will repeat it until the end of times. May God protect the people, everywhere, from the politicians.