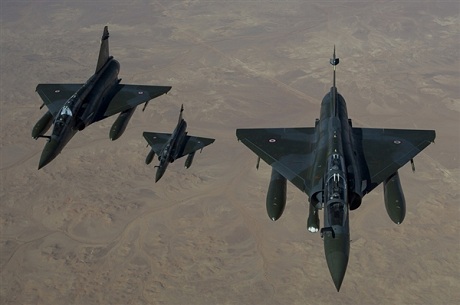 Western powers are engaged in yet another military intervention, this time in Mali, a country whose troubles are in no small part a consequence of the U.S./NATO war on Libya to overthrow the regime of Muammar Gaddafi. And yet policymakers and political commentators are proving as disciplined as ever in disregarding the obvious lessons.

The U.S./NATO intervention in Libya served to prolong the conflict and escalate the violence on the ground. Indeed, that without such intervention loyalist forces would crush the armed rebellion within a matter of weeks was a key argument for bombing. The U.N. Security Council passed resolution 1973 on March 17, 2011, and when the bombing campaign began two days later—on the anniversary of the launch of the U.S.’s illegal war on Iraq—Western officials immediately announced their intention to exceed the mandate to enforce a no-fly zone to protect civilians on the ground by backing the armed rebels in furtherance of their policy of regime change in direct violation of the U.N. Charter under which they were ostensibly operating.

By the end of April, the U.S. State Department estimated that as many as 30,000 had been killed, with the Western-backed rebels, whose ranks included al-Qaeda-affiliated groups, committing some of the worst atrocities. Rebel forces targeted sub-Saharan Africans and committed massacres. Towns like Tawargha were ethnically cleansed by Western-backed forces. Hundreds of thousands became refugees. Scores of civilians were killed in the bombings. With the collapse of the regime, lawlessness prevailed throughout the country as rival militias battled for control. The British security service MI5 warned that Libya now offered “a permissive environment for al-Qaeda”, which established the country as a base of operations. The region was flooded with arms. Neighboring countries such as Algeria and Mali were destabilized.

And this was all hailed as a resounding success, a model for future “humanitarian” interventions.

On September 11, 2012, an attack in Benghazi linked to the al-Qaeda affiliated group Ansar al-Sharia resulted in the killing of Ambassador Chris Stevens and three other Americans. But the blowback hasn’t seemed to prompt policymakers and the intelligentsia to reconsider what lessons should be taken away from the Libya adventure.

The U.S. was at the same time intervening directly in Mali, with calamitous consequences of its own. A rebellion by the ethnic Tuareg people against the government began in January 2011, and they later joined forces with jihadist groups that had emerged out of the civil war in Algeria in the 1990s. With the demise Gaddafi, battle-hardened Tuaregs who had fought with the regime fled to Mali. The U.S. spent more than $500 million in a “counterterrorism” program backing the Malian military against the insurgents, including the training of elite military units by U.S. Special Forces. U.S.-trained units under Tuareg leadership then defected, leaving the Malian forces demoralized. In March 2012, a U.S.-trained officer, Capt. Amadou Sanogo, led a coup to overthrow the government of President Amadou Toumani Touré. In the chaos that ensued, an alliance of jihadist groups including Ansar Dine, the Movement for Oneness and Jihad in West Africa, and al Qaeda in the Islamic Maghreb took over northern Mali. Some of the rebels have since rejoined forces with the government to fight the jihadists, who have been terrorizing northern Mali. The military junta has also been committing human rights abuses, including extrajudicial executions, disappearances, and torture.

On October 12, the U.N. Security Council adopted resolution 2071 in response to the junta’s request for an international military force to assist in fighting the jihadists, calling upon member states to provide “coordinated assistance, expertise, training and capacity-building support to the Armed and Security Forces of Mali”.

In December, Amnesty International, being not incapable of drawing lessons from history, sensibly warned that further military intervention by Western powers was “likely to increase the scale of human rights violations” and “risks triggering further ethnic conflict”. Such warnings about unintended but predictable consequences of the use of force, however, fall on deaf ears.

Earlier this month, France—a key ally in the U.S./NATO bombing in Libya—began a military campaign in Mali, with the U.S. providing logistical support. French warplanes engaged in intensive airstrikes with the stated goal of blocking the advance of the jihadists; but, as the New York Times pointed out, after the bombing, militants were “closer, in fact, than they had been before French forces entered the fight.”

A Times editorial wisely suggested that “The lessons of this debacle must be absorbed and perhaps applied elsewhere as well”—but the “lessons” drawn, unfortunately, were the wrong ones; the Times proceeded to declare that “this is no time to walk away from Mali”, called for the U.S. to double down on its military training programs, and opined that France’s airstrikes “make sense”. Former U.S. ambassador to Mali Vicki Huddleston similarly observed in a Times op-ed that “[y]ears of training” by U.S. Special Forces “did not stop the Malian military” from defecting and that the U.S.-backed military “exacerbated the chaos by overthrowing Mali’s democratically elected government”; yet the conclusion drawn was that the U.S. “must not dither” in helping France, which “has begun to exercise leadership”, to “Save Mali” by doing more of the same.

The immediate consequence of France’s military assault, the Times noted the very next day, was that it “escalated into a potentially much broader North African conflict”, with militants seizing a gas field in Algeria and taking 20 foreign hostages, including American, French, British, Japanese, and Norwegian citizens. “The attackers”, the Times observed, “seemed particularly incensed that Algeria’s government had permitted the French to use Algerian airspace to fly warplanes and military equipment into Mali”. The Algerian public was also none too pleased with their government’s decision. The situation “heightened concerns that a Western military intervention could transform militant groups that once had only a regional focus into avowed enemies of the United States—in other words, that the backlash might end up being worse than the original threat.”

The U.S. response was predictable, which was to escalate its own involvement, such as coordinating with the French on the deployment of American cargo planes to transport French troops and equipment into Mali. Supporting France’s military intervention was “the most prudent course” of action, Daniel Byman commented in Foreign Policy, despite the “sensible” concern that such intervention could escalate anti-American sentiment and escalate the threat of terrorist attacks against Americans.

The U.N. High Commissioner for Refugees (UNHCR), meanwhile, has reported that nearly 230,000 people had been forcibly displaced in Mali in the past year and warned that the escalation of the conflict could result in 700,000 additional refugees, with there already having been a noticeable increase in the number of Malians fleeing to the neighboring countries of Niger, Mauritania, and Burkina Faso since the French military campaign began.

The lessons from past and present experiences are difficult to ignore, but self-disciplined policymakers and pundits beholden to the state religion manage to do just that, continuing to insist that the solution is to continue the same foreign policy of military interventionism that largely contributed to creating the problem in the first place.