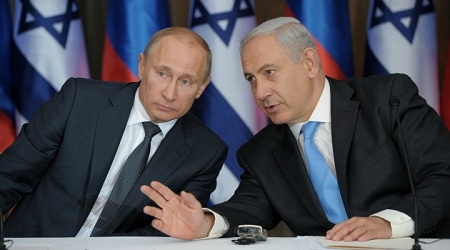 BEIRUT — Two interpretations by the participants themselves, of what significant international meetings achieved, the first on June 25 and the second five days later, remind us about subjectivity in the eyes of the beholders.

Similarly, vastly divergent Russian-Israeli interpretations about what was agreed to during the 24 hour “just passing through” visit by  Vladimir Putin to Palestine and  the Zionist lobby’s touting of “a new Israel-Russia bi-lateral alliance” suggests serious wishful thinking by one side according to an official at the Russian Embassy in Beirut with whom this observer discussed last week’s Putin visit.

At a joint news conference after their meeting, Mr. Netanyahu said he and Mr. Putin had agreed that the prospect of a nuclear-armed Iran “presents a grave danger first of all to Israel, and to the region and the world as a whole.” Netanyahu announced on June 25, to raised eyebrows from some among the 400 member visiting Russian delegation, that Israel expects the once and likely future superpower to support expanded sanctions against Tehran, demand a halt to all uranium enrichment by Iran, insist on the removal of all enriched uranium from Iran, and the dismantling of an underground nuclear facility near the city of Qom.

For Putin’s part, he only proffered that he and Netanyahu had discussed Syria and the Iranian nuclear program and that the talks had been “useful”.  During his short visit Putin inaugurated a memorial in Netanya for Soviet troops killed in World War II and presumably had other motives, given Russia’s interest in Israel’s defense industry.  In the last two years, Russia has purchased 12 drones from different Israeli companies.

The newly inaugurated Russian president, who has said he regarded the breakup of the Soviet Union as a geopolitical catastrophe, defended the Iranian people’s right to use nuclear energy for peaceful purposes, but pointed out at the same time that Iran should guarantee non-proliferation of nuclear weapons; but in any case, the problem should be solved peacefully, by way of talks.

Israel’s Prime Minister repeatedly expressed reservations about Russia’s role in the long-stagnant Israeli-Palestinian “peace process”. He complained to Putin that Russia, a member of the so-called quartet of Middle East peacemakers has consistently sided with the Palestinians during disputes. Netanyahu called on Putin to urge the Palestinians to return to negotiations but received a puzzled look from his guest as if Putin might have been wondering why Israel has not suspended illegal settlements expansion and land confiscations, as the Palestinians and the international community have  demanded for over four decades.  Undaunted, Netanyahu appeared not to notice Putin’s quizzical expression while insisting that he was sure that the Russian visit would improve ties in agriculture, science, technology and space, “among other fields”.

The Israeli Prime Ministers staff explained that the Soviet Union had been hostile to Israel and now relations should improve while Defense Minister Ehud Barak said at an Independence Party meeting that “Russia is a very important world power, a country that played a very important role in Syria’s history in the past few years and that is why it will play a key role in the shaping of post-Assad Syria.” Barak also stressed Russia’s importance in “the international effort vis-à-vis Iran in terms of sanctions and diplomacy and his belief that Putin understood that in dealing with Iran, Israel faces a decision between “bombing or the bomb” and if Israel doesn’t attack, Iran will eventually obtain nuclear weapons.

Yet, according to Russian Embassy discussions in Beirut, Putin repeatedly warned Israeli officials that the very existence of Israel was at risk if it attacked Iran and that Israel should not delude itself that Russia will ever sanction an attack on Iran or that Russia will get involved with Israel’s attack in anyway.  Putin emphasized that Israel should think twice before taking any action on Iran and should learn lessons from the United States’ experiences in Iraq and Afghanistan.

“Look what happened to America in Afghanistan and Iraq,” Putin said. “I told Obama also. You don’t need to jump to things too early; you don’t need to act before thinking. In Iraq there is a pro-Iranian government after everything that happened there. You need to think well before doing something you’ll be sorry about.” Putin also told Netanyahu that Russia will recognize a Palestinian state.

Several high ranking Bush administration officials, drawing salaries from US taxpayers while serving Israel, and who pushed the US to invade Afghanistan and Iraq are currently attempting the same fate for Iran. Backed by the Zionist lobby, they and the Russians are in agreement that only US incompetence gave both countries to Iran with more quite likely in the pipeline from the Persian Gulf area.

Arab- and Islamophobe Ruthie Blum, former senior editor at the Jerusalem Post and author of “To Hell in a Handbasket: Carter, Obama, and the ‘Arab Spring’”, claims that President Obama and the American taxpayers have betrayed Israel.

Ruthie, writing in the current issue of Israel Hayom explains that “Since the minute that Barack Obama became president of the United States nearly four years ago, it was clear that the Jewish state was being tossed aside like an unappreciated, loyal, long-time wife for a far more alluring, utterly inappropriate, and dangerous lover. Indeed, Obama has not hidden the hots he has always had for the Islamic world; nor has he been the least bit discreet about his attraction to its more anti-Western elements. It is the height of tragic irony that, in the absence of its previous protection by its adulterous spouse, America, the Israeli government has nowhere to turn but to Russia.”

Netanyahu’s staff, which sent her piece to US Zionist lobby outfits, reportedly sees, as their boss does, Israel’s very existence at stake, and he’s prepared for Israel to go it alone or link with Russia because he’s “unwilling to entrust the survival of the Jewish state to America.”

Meanwhile, during a talk-show, when Ruthie finally gave him a chance to get a word in edgewise, Israeli journalist and TV show host Dan Margalit announced that: “In a time when the Arab-Left-anti-Semitic axis is doing its utmost to delegitimize and marginalize Israel, Putin’s visit has the power to counter dozens of evil-hearted artists and musicians who boycott Israel. If such visits were the norm, Israel would have laid the red carpet at Ben-Gurion International Airport and welcomed U.S. President Barack Obama by now, but he is understandably not trusted here while Romney is plus if Mitt is elected President he promised his first trip will be to Israel. Obama has never come once since he became President.”

The Obama administration, but not apparently the Congress, was taken aback and issued a statement from Ben LaBolt, an Obama campaign spokesman: “Governor Romney has said he would do the opposite of what President Obama has done in our relations with Israel. Now he must specify how — does that mean he would reverse President Obama’s policies of sending Israel the largest security assistance packages in history? Does it mean he would let Israel stand alone at the United Nations, or that he would stop funding the Iron Dome system? Does it mean he would abandon the coalition working together to confront Iran’s nuclear ambitions?”

Netanyahu advisor Benny Goldberg explained Israel’s seemingly awkward overtures to Russia as realpolitik. “Look, it’s like the coming Mitt Romney visit.  We will welcome him as we well as Obama if he decides to visit.  After all, in the US Congress we seek support from both sides of the aisle so it’s logical that we want the same relationship with Moscow as we have with Washington.”

So much for the Obama administration’s fantasy of the US-Israel special, one of a kind devoted, legendary, eternal, rock solid, unbreakable, forever and ever iron-clad bond and indivisible alliance, which gives America a reliable, democratic, strategic, Gemini-twins-like partnership with America and her very generous, if uninformed, taxpayers.

Some cynical Congressional staffers have commented that Israel already has the US government in its back pocket and that Congress will guarantee that it remains so; therefore Israel has nothing to lose by intimating to the Russians that will discard the US at least to the extent of promoting Russian interests in the region.  After all, as is well known in the White House, Israel sold to the USSR, through a third party, stolen top secret specialized code-word compartmented (TS/SCI) intelligence via Jonathan Pollard, which from his KGB tenure Putin presumably  has direct knowledge of.

Goldberg also explained recently that in the past it was only logic that dictated switching Israeli acceptance of the “keeping the Golan Heights quiet Alawi Shia regime in Syria” which at the time made sense given the concomitant danger from Sunni Islamists, including the Muslim Brotherhood, Hamas, and Islamic Jihad. But now Israel has switched its support for a Sunni regime in Syria that it hopes will confront Iran and Hezbollah.  Realpolitik also dictates that if the Sunnis fail to topple Assad Israel can live with that also because it believes that Israel’s annexation of the Golan will not be challenged with more than words.

There is little conflict between Russia’s and Israel’s interests because neither country is as powerful as it would like to be in the region. Russia has few of the options it had during the Cold War and Israel has little influence in the outcome in Syria or in Egypt.

On the other hand, Russia and Israel do have some complementary interests. One example is Azerbaijan, where Russian is a major weapons provider for the regime and the Israelis are also selling it large amounts of weapons.  The CIA suspects it has set up a base from which to spy on, and, according to rumors, prepare to attack Iran. Apparently Russia does not feel threatened by Israeli involvement in Azerbaijan or that both are there, and each operate in ways that would appear to be in conflict but don’t, according to Stratford’s George Freeman.

There are also some bilateral interests on an economic and a strategic level, because Russia is looking for new partners in the area.

In addition, both Russia and Israel have benefited enormously from U.S. “terrorism wars” in the Islamic world. It is not just that these wars alienate Muslims, which is beneficial to Israel, but they also help the Russians due to the debilitating human and economic cost for America.

As the US staggers, and with Russia and China practicing shrewd Middle East politics, one imagines that Israeli leaders might be recalling the days and reasons that the Zionist colonial enterprise dumped England for America following World War II.