The Collapsing U.S. Economy and the End of the World 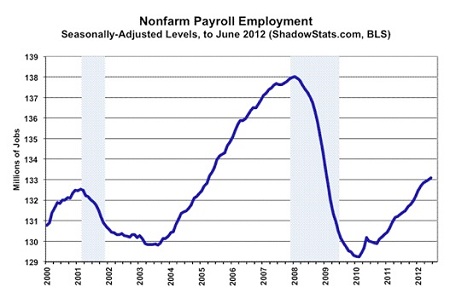 In a recent column, “Can the World Survive Washington’s Hubris,” I promised to examine whether the US economy will collapse before Washington in its pursuit of world hegemony brings us into military confrontation with Russia and China. This is likely to be an ongoing subject on my website, so this column will not be the final word.

Washington has been at war since October 2001, when President George W. Bush concocted an excuse to order the US invasion of Afghanistan. This war took a back seat when Bush concocted another excuse to order the invasion of Iraq in 2003, a war that went on without significant success for 8 years and has left Iraq in chaos with dozens more killed and wounded every day, a new strong man in place of the illegally executed former strongman, and the likelihood of the ongoing violence becoming civil war.

Upon his election, President Obama foolishly sent more troops to Afghanistan and renewed the intensity of that war, now in its eleventh year, to no successful effect.

These two wars have been expensive. According to estimates by Joseph Stiglitz and Linda Bilmes, when all costs are counted, the Iraq invasion cost US taxpayers $3 trillion dollars. Ditto for the Afghan war. In other words, the two gratuitous wars doubled the US public debt. This is the reason there is no money for Social Security, Medicare, Medicaid, food stamps, the environment, and the social safety net.

Americans got nothing out of the wars, but as the war debt will never be paid off, US citizens and their descendants will have to pay interest on $6,000 billion of war debt in perpetuity.

Not content with these wars, the Bush/Obama regime is conducting military operations in violation of international law in Pakistan, Yemen, and Africa, organized the overthrow by armed conflict of the government in Libya, is currently working to overthrow the Syrian government, and continues to marshal military forces against Iran.

Finding the Muslim adversaries Washington created insufficient for its energies and budget, Washington has encircled Russia with military bases and has begun the encirclement of China. Washington has announced that the bulk of its naval forces will be shifted to the Pacific over the next few years, and Washington is working to re-establish its naval base in the Philippines, construct a new one on a South Korean island, acquire a naval base in Vietnam, and air and troop bases elsewhere in Asia.

In Thailand, Washington is attempting to purchase with the usual bribes an air base used in the Vietnam war. There is opposition, as the country does not wish to be drawn into Washington’s orchestrated conflict with China. Downplaying the real reason for the airbase, Washington, according to Thai newspapers, told the Thai government that the base was needed for “humanitarian missions.” This didn’t fly, so Washington had NASA ask for the air base in order to conduct “weather experiments.” Whether this ruse is sufficient cover remains to be seen.

US Marines have been sent to Australia and elsewhere in Asia. To corral China and Russia (and Iran) is a massive undertaking for a country that is financially busted. With wars and bankster bailouts, Bush and Obama have doubled the US national debt while failing to address the disintegration of the US economy and rising hardships of US citizens.

The charts below are courtesy of www.shadowstats.com:

The annual US budget deficit is adding to the accumulated debt at about $1.5 trillion per  year with no prospect of declining. The financial system is broken and requires ongoing bailouts. The economy is busted and has been unable to create high-paying jobs, indeed any jobs. Despite years of population growth, payroll employment as of mid-2012 is the same as in 2005 and substantially below 2008. Yet, the government and financial presstitute media tell us that we have a recovery.

According to the US Bureau of Labor Statistics, employment in 2011 was only 1 million more than in 2002. As it takes about 150,000 new jobs each month to stay even with population growth, that leaves a decade long job deficit of 15 million jobs. 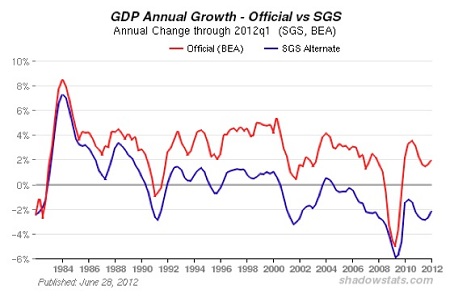 Changes in the way inflation is measured have destroyed the Consumer Price Index (CPI) as a measure of the cost of living. The new methodology is substitution based. If the price of an item in the index rises, a lower priced alternative takes its place. In addition, some price rises are labeled quality improvements whether they are or not and thus do not show up in the CPI. People still have to pay the higher price, but it is not counted as inflation.

The Misery Index is the sum of the inflation and unemployment rates. The level of the current Misery Index depends on whether the new rigged measures are used, which understate the misery, or the former methodology that accurately measures it.

The understatement of inflation serves to boost Gross Domestic Product (GDP). GDP is calculated in current dollars. To be able to determine whether GDP rose because of price rises or because of increases in real output, GDP is deflated by the CPI. The higher the inflation rate, the less the growth in real output and vice versa. When the substitution based methodology is used to measure inflation, the US economy experienced real growth in the 21st century except for the sharp dip during 2008-2010. However, if the cost-of-living based methodology is used, except for a short period during 2004, the US economy has experienced no real growth since 2000.

In the chart above, the lower measure (blue) of real GDP is deflated with the inflation methodology that measured cost-of-living. The higher GDP measure (red) deflates GDP with the new substitution based methodology.