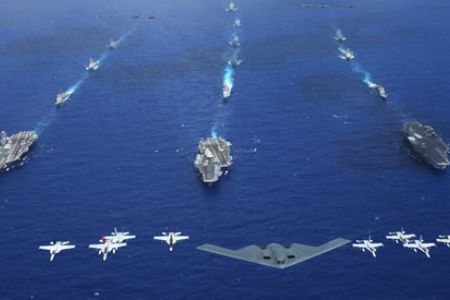 “Scare the hell out of the American people.” — Senator Arthur Vandenburg, 1947.

“It is part of the general pattern of misguided policy that our country is now geared to an arms economy which was bred in an artificially induced psychosis of war hysteria and nurtured upon an incessant propaganda of fear. While such an economy may produce a sense of seeming prosperity for the moment, it rests on an illusionary foundation of complete unreliability and renders among our political leaders almost a greater fear of peace than is their fear of war.” — General Douglas MacArthur, May 15, 1952.

At one point in my youth, it became clear that the U.S. was a violent force in the world, probably as I watched the Vietnam war news on the local TV news. Later, it also became clear that its whole history is one of violence, at home and abroad. More recently I had naively hoped that as the U.S. Empire goes through its death throes, it would quit the world peacefully. The latter thought was more a suspension of belief of my knowledge that I knew violence was the U.S. way of life, that I feared what the end of empire might bring. My current thinking is that through this course of historical violence to all people who oppose the corporate state—from the laborers and workers at home, to the farmers, workers, and laborers in foreign countries—the ending of the empire is in process and is and will continue to be violent.

But it is ending. After a brief hiatus from computer news reading, I came back online to two articles that examine the economic problems faced by the world. The first by Paul Craig Roberts, Collapse at Hand, discussed the U.S. economy and its relationship with the world, China in particular. The conclusion was that the U.S. economy was destined to fail, with the only indeterminate part being the “sooner or later.”

The second article was by Mike Whitney, whom I have followed for the past several years and found his examinations and qualified predictions to be very much on the mark. His article, In Negative Territory – A Synchronized Global Slowdown, (Counterpunch, June 4, 2012) took a stronger look at the situation with the European Union and its problems. His general conclusion was the same, “sooner or later” it has to fall apart in some way.

At least the empire is ending. The violence, so much a part of U.S history, will continue and may become worse, more subtle abroad with the use of drones, and more obvious at home with the application of the dictates of the militarized state within the police forces.

Violence over the Americas

The U.S. was birthed in violence with its revolution of New World elites wanting to shed their relationship with the British Empire and continue on with their own. The empirical violence followed across the continent, using genocide against the indigenous populations, and military violence against the British and French, who were not paragons of virtue themselves. Mexico was defeated after a false flag setup, and the way west was clear.

Following this came the Monroe Doctrine, an extension of their Manifest Destiny, and a pretext against Old World imperialism in order that their own imperialism could be applied to Central and South America, and the Caribbean. With all the agricultural and mineral riches of the New World now at their disposal, the violence continued as U.S. corporations controlled many of the land resources with the direct assistance of the U.S. military. From Haiti to Chile, subversion, covert actions, training of death squads and police squads, naval and marine interventions became the norm. It continues today most actively in Central America—most recently with the removal of Zelaya in Honduras in 2009—and in Columbia with the pretext of the war on drugs used to establish military bases to cover the continent.

The violence spread overseas with the fall of the Spanish possessions in South East Asia. The Philippines had as many as one million casualties as the U.S. defeated the native insurrections against the Spanish rulers. Later in Indonesia, half a million people were killed in U.S. supported genocide of an insurrection against government corruption there. The oil, tin, and rubber of the region fell under U.S. corporate dominance.

French Indo-China became the next focus, where the created fear of falling dominos under communist rule provided the rationale for the genocide and murder of several millions of indigenous peoples of the region. Had Canada and the U.S. allowed the U.N.-sanctioned vote to proceed, there would have been no war and a united country not torn up and poisoned by war.

The propaganda against the Soviet Union after the Second World War was persistent and ubiquitous. The lies and deceptions that were extended throughout this period still form a part of the U.S. myth of defending freedom. In reality, the Soviet Union never acted overtly to extend its empire beyond Eastern Europe, which it desired as a buffer against repeated German and French wars against their territory.

Elsewhere in the world, whenever a democratically elected government acted for the people rather than for the corporate interests of the U.S., the propaganda mill turned events into a communist threat against the very heart of U.S. ideology and mythology. There was no war with the Soviets, but there was an ongoing war with Third World countries that attempted an independent economic and political path supporting their own people and not the corporate interests of the elites.

With the collapse of the Soviet Union in 1991, the U.S. achieved a unipolar world, with their military unmatched by any other in the world. It created a great chance for global peace, but the U.S. policy makers wanted ‘full spectrum dominance’ over the globe for ever and a day. Rather than declining, the military violence increased, only this time directed at the Middle East.

Europe had not escaped U.S. military dominance. Immediately after the end of WW II, the U.S. helped Great Britain restore the old order in Greece by turning on the resistance that had almost driven the Germans from the country and had established a collective governance system. The same occurred in Italy where their resistance, especially in the north, had set up a similar system. In order for Italy not to fall to the communist and socialist parties that were very popular after the war, the U.S. mounted a huge campaign of financial support for the old crony lineage of governance.

The Marshall Plan and NATO were larger ideas to cement a renewed industrial Europe to the U.S. empire. While superficially benevolent, the Marshall Plan was designed to get rid of the socialist ‘threat’ and with the wise use of loans and economic support, tie the region into U.S. economic alignment. NATO, theoretically designed to stop a Soviet invasion of Europe, has been a successful attempt to extend the U.S. military over Europe and to use that dominance to pursue U.S. purposes outside of Europe (Yugoslavia, Afghanistan, Libya…) while extending it ever closer to Russia’s borders. Germany has been nominally occupied by the U.S. since the end of the war, and has attained status as the EU’s economic powerhouse, creating its own mini-economic empire that is now unraveling.

The British rapidly lost influence in the Middle East after WWII. Over-extended and embattled in India and Palestine, the British passed the baton to the rising U.S. empire. With the huge resource of oil readily available—the resource that has powered the world in its military and consumptive excesses for the past century—the Middle East was a prime target for U.S. interventions. It began with the overthrow of Mossadegh in Iran and the installation of the corrupt Shah Pahlavi regime.

Interventions continued and increased with support for Israel and various neighboring monarchic and totalitarian regimes whose elites supported the U.S. requirements for easy cheap oil. The Iran-Iraq war created a situation in which both countries could be weakened while the empire provided information and military assistance to Iraq. Later of course, as Hussein acted more independently, more vociferously against Israel, and swept aside the petrodollar to trade oil in Euros, he became a target of U.S. economic and military interests.

Propaganda – or advertising – or patriotism – it is all the same.

No matter what the rhetoric, the ultimate aim of empire is the centralization of wealth and power in the hands of the elite. The management of empires is largely achieved by the application of basic psychology—creating fear of some ‘other’, in order to have a target for the average citizen to focus on rather than swindles, cheats, thievery, and lies of their own government. To accompany the fearful ‘other,’ a ‘hero’ is created, a patriotic mythological character embodying the best of uber-patriotism, someone who rallies others to the flag regardless of the occasion or occurrence.

This is all so obvious yet unseen as we literally swim in it with our everyday lives. From the moment of birth when the first advertisers throw their bounty on the newborn, the propaganda for our lifestyle is continuous and ubiquitous. It is often so obvious that it is simply considered normal, but propaganda it is, all in support of the elites who receive the benefits of complacent masses whose uncertainties and discomforts can be attributed to this ‘other’.