A Night at the Theatre With Vietnam’s Water Puppets 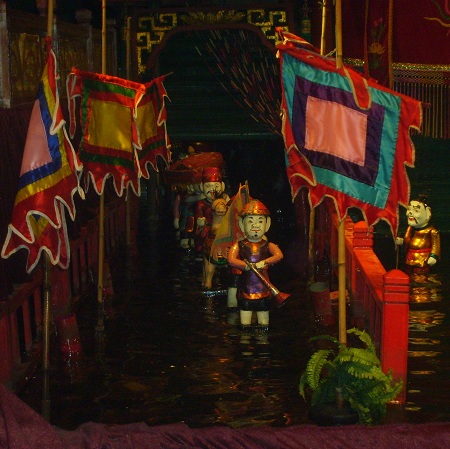 On a warm evening in Hanoi’s Thanh Long Theatre, the best way to cool off and be entertained is watch a few wooden characters tell a story while floating in a shallow pool. In a few minutes time, a performance will breathe new life into legends and folklore dating back from the Lý Dynasty which ruled Vietnam between 1009 and 1225. The tales are about life in northern Vietnam’s rural landscape. For me, it will be a new method of learning history.

Originally, water puppet shows were strictly for hamlet dwellers, celebrating the arrival of spring or a major festival (Contreras, 1995, 25). These days, performances are for the benefit of visitors wishing to expand their cultural appetites, and I am waiting patiently for my serving.

The puppets will undoubtedly be the main attraction, but who is pulling the strings? The real geniuses are hiding their identities behind bamboo blinds disguised as backdrops of well-known landmarks such as the Truong Tien Bridge in the city of Hue. The men and women responsible for the puppets’ flawless movements of puppets will have their moment to bask in glory, but now it is time for the stars to take to the stage. Little is known about their techniques, but the mystique associated with the Vietnamese art of water puppetry only adds to the anticipation of a memorable night ahead. 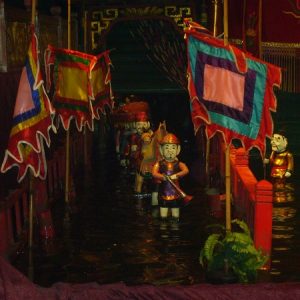 As a non-Vietnamese language speaker and with nobody to translate for me, I rely on my observation of the puppets’ antics rather than the dialogue. The audience is introduced to Teu, a jolly-looking man in a red gown who will narrate the evening’s proceedings. This is a guided tour about peasant life in the rainy season near the Perfume River. Men toil the fields with their buffaloes and women plant rice. There is a high expectation of a good crop yield. Unfortunately, the peace is disrupted when a duck goes missing, causing uneasiness in the village. As villagers become more suspicious of each other, a struggle develops between landlords and farmers. It takes the arrival of the dragon, signaling the commencement of Tet, or Vietnamese New Year, to ward off evil spirits which nearly engulfed the village. The arrival of three other mythical creatures, the unicorn, phoenix and tortoise, represent qualities required for village dwellers to preserve prosperity and good health. The story is as informative as it is heartwarming.

It is hard for me to pick a favorite moment, but my thoughts turn to one scene which emphasize the true purpose of water puppetry; satire. It involves an intriguing battle between a farmer and a fish. The farmer stands in the river, basket poised, ready to land a lethal blow, but his foe averts the enemy on several occasions. So daring is the fish, he taunts the farmer by swimming around him and underneath the boat which the farmer used for transportation. With one last desperate lunge, the farmer slams the bamboo basket too close to the boat, mistiming his attack and hitting the head of his fellow fisherman who is sitting in the boat, earning the audience’s laughter. While the farmer is ashamed of his inability to hunt food, it is the background score that gives the scene a feel of slapstick comedy. 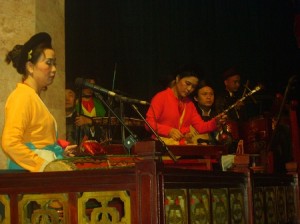 The use of Cheo, a style of folk music performed with a small orchestra, is crucial in providing dramatic effects to keep the audience’s attention. Comprising of woodwind and percussion instruments, the musicians rarely look at the audience, instead channeling all their energy in crafting each note in conjunction with the movements taking place on the water. Their contributions power the show through to the finale, one which pays homage to the reluctant heroes of the night – the puppeteers, who emerge from anonymity to reveal themselves to the public.

When the curtain is raised, the puppet masters smile nervously and bow to the spectators, who in turn reciprocate their appreciation by showering the puppeteers with applause. These silent stars have played an important part in reinvigorating history, a task that modern cinema or even a western-style theatrical adaptation may not have been capable of accomplishing. In the sink-or-swim environment of live entertainment, each of these humble individuals have passed the test of making a lasting impression on how to portray history and legend in a manner certain to leave a lasting impression in my mind.

My final act for the night is to spend a few minutes at Hoam Kiem Lake, reflecting on what I have taken away; the deft handwork of puppet operators, an introduction to traditional music, and a fresh approach to reinforcing how much farmers dedicate their lives to treating the earth and water like their own children. This is a gift passed down through the ages, one which feeds my desire for a more thorough investigation into a mysterious yet elaborate art.

Alas poor Teu, I knew him well, for he was a great host, even if he had a wooden exterior. But he certainly did not have a wooden heart when it came to sharing a passion for storytelling.