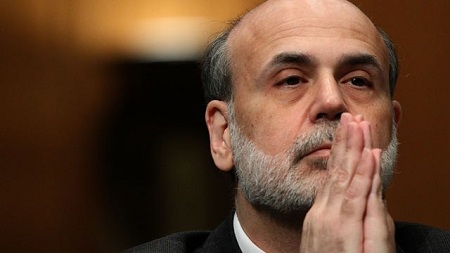 The April issue of The Atlantic has a worshipful piece on Federal Reserve Chairman Ben Bernanke, featuring him on the cover with the moniker, “THE HERO”. “Ben Bernanke saved the economy”, hails the author, Roger Lowenstein, who also characterizes the Fed as a temple of wisdom from whence is derived a stable and healthy economy, thanks to the workings of its enlightened monetary policy, without which our economy would descend into chaos and despair. 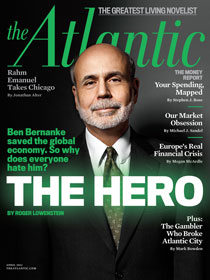 The piece begins by describing the Fed as “a bulwark to the banking system and an antidote to its frequent runs and panics”. Lowenstein goes into the history of central banking in the U.S., pointing out that the Fed is the U.S.’s “third attempt at a central bank”. The first one lasted from 1791 until 1811, when Congress allowed its charter to expire. But the Congress “realized its error” during the War of 1812 because “in the absence of a central bank, inflation had run rampant”. So the Second Bank of the United States was established and it “astutely managed” its supply of notes “so as to keep the economy humming. Alas, President Andrew Jackson, a fierce opponent of both paper money and national banks, campaigned in 1832 against renewal of the charter,” and after he won the election, the bank was “destroyed” and the “economy promptly plunged into a severe depression.”

The history Lowenstein offers here could perhaps best be described as the establishment-approved version. Murray N. Rothbard offers an antidote to it in his book A History of Money and Banking in the United States, in which he explains how the federal government, to finance its debt during the War of 1812, “encouraged the formation of new and recklessly inflationary banks … which printed huge quantities of new notes to purchase government bonds.” Unincorporated banks also sprang up, “which were illegal in most states but were allowed to function under war conditions.”

Eventually, unsound banks began to face insolvency, but rather than allowing bankruptcy and liquidation, the government stepped in and, “in one of the most flagrant violations of property rights in American history”, relieved the banks of their contractual obligation to redeem their notes and deposits in gold or silver. In fact, writes Rothbard, “a major inflationary impetus during the War of 1812 came during the year 1815 after specie payments had been suspended” (emphasis added). He continues:

Historians dedicated to the notion that central banks restrain state or private bank inflation have placed the blame for the multiplicity of banks and bank credit inflation during the War of 1812 on the absence of a central bank. But … the federal government, not the state banks themselves, is largely to blame for encouraging new, inflated banks to monetize the war debt. Then, in particular, it allowed them to suspend specie payment in August 1814, and to continue that suspension for two years after the war was over, until February 1817. Thus, for two and a half years banks were permitted to operate and expand while issuing what was tantamount to fiat paper and bank deposits.

Besides monetary inflation, the cutoff of trade during the war also pushed prices upwards. And the government’s act of permitting the banks to suspend redemption in specie set a dangerous precedent that was to be followed in numerous banking crises throughout U.S. history. Rothbard comments:

It thus became clear to the banks that in a general crisis they would not be required to meet the ordinary obligations of contract law or of respect for property rights, so their inflationary expansion was permanently encouraged by this massive failure of government to fulfill its obligation to enforce contracts and defend the rights of property.

In the aftermath of the war, rather than compelling banks that had lent irresponsibly to honor their legal obligations or to liquidate, the Second Bank of the United States was established “to support the state banks in their inflationary course”. The banks agreed to resume specie payments only after the new central bank issued $6 million worth of credit to them, a “massive inflation” at the time. Rothbard quotes Senator William H. Wells arguing against the bank bill by saying that it was

ostensibly for the purpose of correcting the diseased state of our paper currency by restraining and curtailing the overissue of bank paper, and yet it came prepared to inflict upon us the same evil, being itself nothing more than simply a paper-making machine.

“From its inception,” Rothbard writes, “the Second Bank launched a spectacular inflation of money and credit” and, “in a scant year and a half of operation, the Second Bank of the United States had added a net of $19.2 million to the nation’s money supply, a “huge expansion of money and credit” that “impelled a full-scale inflationary boom throughout the country”, which led to the “first nationwide ‘boom-bust’ cycle” in the United States.

So, to review, we are supposed to think that the country needed a central bank to prevent “rampant inflation”, and once Jackson killed this central bank, the brakes on inflation were released and disaster ensued when the “economy promptly plunged into a severe depression”, a reference to the Panic of 1837.

What happened was that the bank’s president, Nicholas Biddle, in 1831 filed for early renewal of its charter, which was set to expire in 1836. Jackson vetoed it, and Congress failed to pass it over his veto. In 1833, Jackson removed public Treasury deposits from the Second Bank of the United States and put them in state banks. This marked the effective end of its role as a central bank of the United States, although its charter didn’t expire until 1836, after which it operated as a regular bank until its failure several years later.

Orthodox historians have long maintained that by his reckless act of destroying the Bank of the United States and shifting government funds to the numerous pet banks, Andrew Jackson freed the state banks from the restraints imposed on them by a central bank. Thus, the banks were supposedly allowed to pyramid notes and deposits rashly on top of existing specie and precipitate a wild inflation that was later succeeded by two bank panics and a disastrous deflation.

But the “conventional” view is belied by the fact “that the driving force for monetary expansion was the Bank of the United States, which acted as an inflationary rather than a restraining force upon the state banks.”

As for the inflation that occurred from 1833-37, Rothbard writes that it was the consequence of an inflow of gold and silver coin into the country, such that “the total specie in the country rose swiftly from $31 million to $73 million”. The banks then pyramided on top of their increased reserves, inflating through fractional reserve lending. One could thus argue that the government during the Jackson administration did not go far enough in merely ending the inflationary role of the central bank, but should have also enforced a 100% reserve requirement, which would forbid banks from loaning notes representing gold or silver that they didn’t have. That is to say, it could be argued that the government should have also ended the practice of legalized counterfeiting.