9/11 As Sequel to Iran-Contra: Armitage, Carlucci and Friends 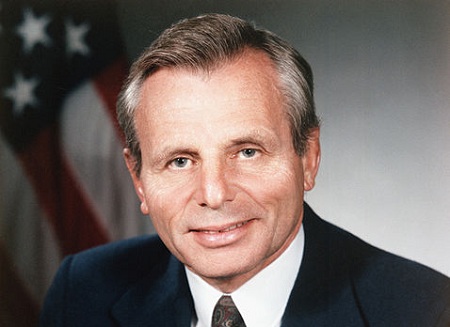 Dick Cheney and Donald Rumsfeld are among the leading suspects in the crimes of September 11, 2001.  Reasons for this include that they were in the most powerful positions in the U.S. that day, that there is evidence they had foreknowledge of the attacks, and that they did not respond effectively.  Other people who were closely associated with Dick and Don should also be investigated if they were in positions to be involved.  Richard Armitage and Frank Carlucci are two such people.  They both played important roles with respect to the events of September 11, 2001 and, prior to that, both had a colorful history of covert operations which intertwined and was aligned with the careers of Dick and Don.  Armitage and Carlucci both also benefited from the War on Terror by way of profits made after the attacks.

For the twelve years prior to the attacks, Frank Carlucci ran the Carlyle Group, an investment firm with close ties to the most powerful members of the Reagan and Bush I administrations, and to the Saudi Arabian oil industry.  The two major operating subsidiaries of that company were BDM international, for which Carlucci was chairman, and the Vinnell Corporation.  Working for Carlucci at BDM from 1989 to 1996 was its vice president, Barry McDaniel, who left to become the Chief Operating Officer for an alarmingly suspicious company.  That was Stratesec, the security company that had contracts for so many of the facilities associated with the 9/11 attacks.

On September 11, 2001, Carlucci was meeting with Carlyle investors at the Ritz Carlton Hotel in Washington, DC, along with the brother of Osama bin Laden.[1]  Former president George H.W. Bush had been meeting with them the previous day.  Today, McDaniel is business partners with one of Dick Cheney’s closest former colleagues, Bruce Bradley, whose business partner Alan Woods is mentioned below.[2]

Armitage was one of the signatories of a 1998 letter to President Clinton from the Project for a New American Century (PNAC), calling for military intervention against Saddam Hussein in Iraq.  In 2001, Armitage was the Deputy Secretary of State reporting to Colin Powell.  He was involved in the secure video teleconference run by Richard Clarke that failed to respond to the hijacked airliners.  The week of 9/11, in Washington, Armitage met with General Mahmud Ahmed, the head of Pakistani Inter-Services Intelligence (ISI) who reportedly ordered $100,000 to be wired to the alleged hijackers.  Moreover, Armitage was a director at Choicepoint, which provided DNA testing on 9/11 victims through its subsidiary, Bode Technology.

Green’s position in the State Department put him in control of the Bureau of Consular Affairs, which issued visas to foreign nationals.  The Bureau’s new express visa program, instituted under the leadership of Armitage and Green, provided visas to five of the alleged 9/11 hijackers.  Ten of the other alleged hijackers had previously received their visas in the same U.S. consulate office in Saudi Arabia.  The express program made an already bad system worse because the new process was one in which “The issuing officer has no idea whether the person applying for the visa is actually the person (listed) in the documents and application.”[4] That is, in terms of the visas, anyone could have taken the place of the alleged hijackers and Armitage and Green were in a position to supervise that dubious process.

Therefore, Carlucci, Armitage, and Green had interesting connections to 9/11.  Furthermore, Green’s background recalls the secret history of Armitage and Carlucci, two men who greatly influenced U.S. government policy in the 25 years before 9/11.

Frank Carlucci was one of the oldest and closest friends of Donald Rumsfeld, whose role as Secretary of Defense on 9/11 was central to the events of that day.  They were college roommates together at Princeton and Rumsfeld brought Carlucci into his first position in the federal government at the Office of Economic Opportunity (OEO).  Carlucci went on to become Deputy Director of the Nixon Office of Management and Budget (OMB), and was later appointed Ambassador to Portugal by President Ford.

Like Richard Clarke, Robert Gates and Paul Wolfowitz, Carlucci’s career as a powerbroker in the U.S. federal government transcended political affiliation.  That might be due to his charm and ability to work with others, or it might be that he was an operative of deep state organizations which transcended political parties.  His history suggests the latter.

Before joining the Carter Administration as Deputy Director of the CIA in 1977, Carlucci had a long history of being implicated in world-changing covert operations.  According to the London Times, he was “accused of plotting the 1961 assassination of Patrice Lumumba, who won independence for the Congo; the overthrow of Chilean president Salvador Allende; coups in Brazil and Zanzibar; and numerous other covert actions.”[5]

Carlucci denied these accusations and none were proven, but such claims continued.  It was reported that Carlucci “was also accused by Italian communists of being behind the kidnapping of Aldo Moro, and subverting the revolutionary process in Portugal.”  In Central America, the spokesman for the Sandinista Front in Nicaragua told reporters that Carlucci “has been a specialist in dirty work and coup attempts in the Third World.”[6]

Carlucci was also “very close friends” with Ted Shackley, a man who was at the center of a private network of covert operatives created after the U.S. government began to cut back CIA activities in the mid-1970s.[7]  Shackley and his associate Thomas Clines knew Carlucci from the 1973 U.S-led coup in Chile, for which Carlucci arranged funding via his role in the OMB.  It was Shackley, with help from George H.W. Bush, who maneuvered Carlucci into the position of Deputy Director of the CIA.

Shackley had a long, close working relationship with Richard Armitage as well.  While Carlucci was working in the Nixon Administration and later in Portugal, Shackley and Armitage were funding covert operations from Southeast Asia by way of drug trafficking.  Vast amounts of cash were smuggled out of Vietnam via this operation, along with military armaments, by Clines and another associate, Richard Secord.[8]

In 1975, Secord was transferred to Iran as chief of the Air Force’s Military Advisory Assistance Group (MAAG). With Shackley, Clines, and others, Secord established an arms sales company called Egyptian American Transport and Service Corporation (EATSCO). Later EATSCO was convicted of embezzling millions of dollars from the Pentagon.  In the mid-1980s, Secord worked for The Vinnell Corporation, a fact which surfaced during the Iran-Contra investigations.[9]