US AFRICOM Reborn in Djibouti 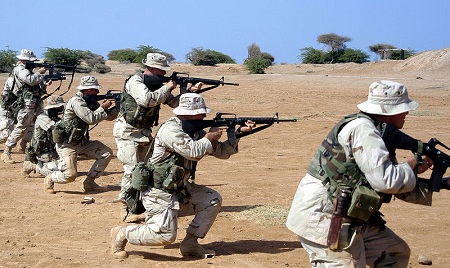 Marines during an exercise at Camp Lemonier, Djibouti.

Marines during an exercise at Camp Lemonnier, Djibouti.

The visit to Djibouti by US Defense Secretary Leon Panetta in late 2011 seems to be an omen foretelling the rebirth of the US African Command’s (AFRICOM) base in the Horn of Africa.

The USA has little choice really, now that the Bahraini people’s resistance to the western-backed Hamad regime has become firmly established and the USA’s continued use of their naval base in Bahrain becomes problematic.

The USA has already been expelled from Iraq, and with the Shia belt and its critical Saudi oil fields increasingly unstable, the USA has to take what it can get as close as possible to the Persian Gulf oil fields, and that leaves tiny, drought blighted Djibouti as the fall back position for the US military in the region.

Djibouti was first targeted for a major US military expansion in the years after 9/11, when AFRICOM was born.

No other African country with any strategic importance would let the USA have a major base on their territory, so Africa’s smallest country, Djibouti was made an offer it could not refuse, and thus began what came to be known as “Africom’s $6 Billion Fiasco in Djibouti”.

AFRICOM’s new base was envisioned as a modern, $6 billion facility, including upgraded port and air field facilities and it had already budgeted $2 billion for the first phase of expansion of Camp Lemonnier from 90 acres to 500 acres. This doesn’t include the airstrip expansion or the port facilities.

A wrench got thrown into the gear box when the mountains overlooking the Djibouti base turned out to be Eritrean territory and suddenly hosted Eritrean Defense Force units.

With much of AFRICOM’s new base being in long range artillery fire from Eritrea’s strategic position on the high ground, everything came to a screeching halt and AFRICOM in Djibouti was stillborn by the time the past decade came to a close.

The difference today is that Qatari peacekeepers are now manning the former Eritrean army positions on the highlands overlooking Djibouti so the USA seems like it is going ahead with its new base expansion.

Recently USA’s Djibouti base has seen steady growth and its air strip is home to a very active Drone wing. The official budget for the Camp Lemonnier operation is almost $300 million annually. With a fivefold expansion in the first phase now back on the table it is notable that the first step was signed recently, a “service agreement” between Djibouti and the USA.

Again, the USA has little choice in the matter. They backed the Saudi military intervention in Bahrain to prevent the Hamad regime from falling, but ended up seeing the Bahraini’s Shia cousins in next door eastern Saudi Arabia and its critical oil fields respond with a small but growing rebellion.

The dilemma is that the Hamad regime and its Saudi gun thugs will have to kill a lot of Bahrainis to really suppress the rebellion at this stage and in doing so risks blowing up the Shia belt in next door Saudi Arabia.

The Bahraini people know all too well who is selling the Hamad regime the weapons it is using against  them, and if there is a successful uprising, then the people will want the USA’s critical naval base out of their country.

Where can the USA go if this happens? Djibouti, smack in the middle of the Horn of Africa and the world’s number one economic artery via the Suez Canal and the Bab al Mandeb is the spot.

Defense Secretary Leon Panetta doesn’t usually go so far out of his way to visit a 90 acre facility, tipping us off that something serious was in the works again for Djibouti. The “service agreement” was the predictable next step.

A lot of US military personnel and equipment is going to be based in Djibouti in short order whether the official AFRICOM “headquarters” is there or not.

If the Bahraini people have their way, the US Naval fleet now based in the Persian Gulf will end up there too.