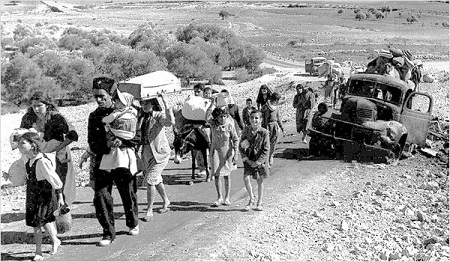 Why Did Palestinian Refugees Come to Lebanon?

Shatila Camp, BEIRUT — During a workshop at the American University of Beirut last year on the subject of the right to  work and to purchase a home for Palestinian refugees, a young business major from the Christian village of  Bikerki posed a question that surprised some in the audience:   “Why, if Palestinians don’t like it in Lebanon, do they not go home?  Why did they even bother coming here in the first place?”

“Caroline” was not being antagonistic.  Many of the younger Lebanese population are taught in private and religious schools by the various sects using a curriculum including subjects that are heavily politicized and skewed, none more than modern Lebanese history.

Talking with Caroline during a tea break, she explained that she feels very politically oriented,  but admitted that she really doesn’t know much about Lebanese history and only vaguely why there are Palestinians in Lebanon.  What she does know, she explained, came from her parents and family members and not from schools in her Christian hamlet, which happens to be the seat of Lebanon’s Maronite Patriarch, for whom she is a part-time volunteer working with orphaned children.

In most private and public schools in Lebanon, sensitive political subjects have long been culled from textbooks by polarized confessional watchdog committees seeking a proper education for their children. UNWRA schools are forbidden to teach Palestinian history in Lebanon or even their history in Palestine lest the U.S. Congress cut UNWRA funding.

This has prevented the development of a unified history curriculum. Most history lessons end in 1946, three years after Lebanon’s independence from French colonial rule. Many schools avoid teaching Lebanese history in order to prevent sectarian and political fervor.

According to Ohaness Goktchian, professor of political science at the American University in Beirut, “We are raising another generation of children who identify themselves only with their communities and not their nation…. [H]istory is what unities people. Without history we can’t have unity.”

Sari Hanafi, a Palestinian professor of sociology at the American University of Beirut, says a unified history curriculum is necessary. “I think in terms of social identity it’s important for the Lebanese to have a shared history which also highlights their differences. We hold absolutely different visions of Lebanon. We should admit this, and admit our own limitations.” Hanafi continues, “There should be no vote (on the content of history textbooks) by the council of ministers or the parliament…. It should be defined and approved by a committee of historians and that’s it.”

All sects get involved is checking what is being taught.  One of the Hezbollah officials this observer most admires is MP Mohammad Fneish, former Labor Minister and currently Minister of Agriculture. Fneish raised an issue with the Ministry of Education last week concerning the use of an American text book called Modern World History that is used at Beirut’s International College (IC), a popular private school.  What the Hezbollah MP and others found disturbing was that the U.S. book states that “Hezbollah, Hamas and Islamic Jihad are terrorist organizations.”

A solution was quickly agreed upon by the Ministry of Education, the International College administration and Hezbollah. The offending passage was simply covered over in each of the books with a sticker and everyone seems more or less satisfied for now.

As a consequence of this impasse in education, which often sees 1946, three years after the end of the French occupation, as the end of the period of history taught in Lebanon, Caroline honestly did not know why Palestinians came to Lebanon. When it comes to the second half of the 20th century, what happened during the Palestinian Nakba and its effects here in Lebanon are largely unknown among youth.

Caroline and I became friends and I gave her some articles from different scholars to read on the Nakba as I sensed she was becoming interested in this subject.  Partly as a dare, she agreed to do research and get back to me with what she discovered about the Nakba and its effects on Lebanon.  She wanted to write from the perspective of a Lebanese student and I in turn would try to help her get college credit for her thesis and maybe even published.

Frankly I had not thought much about our research arrangement for months, and was very happy and surprised when she contacted me the other day to say that she needed me to read her manuscript.

And quite a manuscript it is.

Why, Caroline asked her readers, did more than 129,000 Palestinians come to Lebanon during 1948 while a similar number arrived next door to Syria?

Then she laid out what she had learned and her conclusions:

The current fate of Palestinian refugees in Lebanon, living for decades in inhumane conditions worse that any refugees on earth, is primarily the fault and responsibility of those who stole their lands and ethnically cleansed them during the 1948 Nakba. Additionally, the Palestinian refugees’ abject existence is the responsibility of those who have egregiously nurtured the nineteenth century Zionist colonial enterprise with aid and weapons while averting their eyes from the Palestinians’ Right of Return and the international responsibility to implement international law, including many U.N. Security Council Resolutions 242, 338 and U.N. General Assembly Resolution 194. In addition to the United States and Europe, responsibility attaches to much of the World community.

They were forced out of 531 villages and 11 cities in Palestine as part of a series of detailed and meticulous ethnic cleansing campaigns rarely witnessed since Germany’s Third Reich.  Indeed, many of the same methods used to transfer the population of Palestine through terror and intimidation experienced under the Nazi administration of Germany were employed by the Zionist organizers of the Nakba.

“For more than six decades”, she wrote:  “the Zionist colonial enterprise that still occupies Palestine, falsely claimed that the Palestinians left their farms and homes because they were ordered to do so by Arab governments in order to clear the way for a massive Arab army that would soon throw the Jews into the sea.  It was nonsense of course, since the so-called Arab “army” was ten percent of the Zionist forces, had no such plan, and in the case of Syrian forces ran out of ammunition early on and the Jordanians did not want to fight at all and left after the fall of Lod and  Ramle.”

But, according to Caroline, “the Zionist lobby in the USA and Europe repeated this and many other lies for more than half a century.” Caroline wrote that relatively recently, Walid Khalidi (1988), Zionist historian Benny Morris, the eminent Palestinian scholar Salman Abu Sitta, and others exposed this lingering fraud.

Yet, during the 2012 American presidential campaigns in Florida, New York and elsewhere this shibboleth surfaced again without challenge or rebuttal by the main stream media, debate sponsors or claimed debate “fact checkers.”

A summary of Caroline’s research instructs us about the reasons Palestinians left their homes and land seeking sanctuary in Lebanon.

In approximately 90 per cent of the 531 villages, direct Zionist military attacks emptied the Palestinian population.  This took the forms of expulsion by Jewish forces (approximately 15 per cent), direct military assault by Zionist gangs and militia (60 per cent) and approximately 18 percent as a result of an imminent attack following the destruction of a near-by village sometimes in view of neighboring villages.

Other villages were emptied by insidious “whispering campaigns” whereby Zionist agents, posing as “friendly Jewish neighbors” would whisper to Palestinian villagers that a horrible bombardment of their village was imminent and they must, at risk of their lives, leave for a week or so until ‘the situation’ returned to normal. Another 38 villages were ethnically cleansed because of “fear of Jewish attack” and five villages were emptied on orders of a local leader or Muktar.

Palestinian refugees who were forced into Lebanon more than six decades ago were all part of the Zionist creation of the so-called “refugee problem.”  They came as a direct result of a fanatical genocidal war waged against them by European colonial Zionists before, during and subsequent to the League of Nations British Mandate. Zionist tactics included military and psychological projects and both allowed for hasbara which generated some credence for the fake Zionist slogan: “Palestine is a land without people for a people without land”.

The myth that the Israelis were few and fought with sparse weapons against many well equipped Arab armies was only true in Hollywood’s “Exodus Fantasy.” The number of Arab armies participating went down during the war. The only ones who remained to the last rounds in October, November, and December were the Palestinians and Egyptians, according to Caroline. The Zionist plan from the very beginning emphasized the urgency of building a large army and out of a population of approximately 650,000. More than 100,000, or roughly 16 per cent of the colonial population were under arms.

Caroline is a credit to her religion, village, country and generation, in that she is determined to learn what Lebanon’s confessionalized education does not allow. She has pledged to send her research to all Member of Parliament and to support the intensifying campaign here in Lebanon to secure the right to work and home ownership for the ethnically cleansed Palestinian refugees.