The Tide Has Changed: A Musical Essay and a Lesson in Humanity 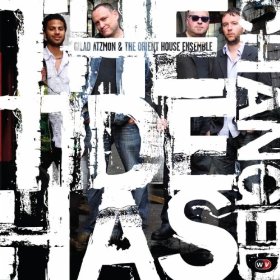 If one tried to fit music compositions into an equivalent literary style, Gilad Atzmon & The Orient House Ensemble’s latest release would come across as a most engaging political essay: persuasive, argumentative, rational, original, imaginative and always unfailingly accessible.

But unlike the rigid politicking of politicians and increasingly Machiavellian style of today’s political essayists — so brazen they no longer hide behind illusory moral façades — the band’s latest work is also unapologetically humanistic.

Those familiar with the writings of Gilad Atzmon — the famed ex-Israeli musician and brilliant saxophone player, now based in London — can only imagine that Gaza was the place that occupied his thoughts as he composed The Tide Has Changed.

The title track, an 11-minute melody, transmits the host of emotions that engulfed many of us when Israel began mercilessly pounding the resilient and hostage Gaza Strip in late 2008. First there were the simultaneous strikes which killed hundreds. Some of us woke up to watch the dreadful images of poor police cadets in Gaza reeling under the ceaseless bombardment in a heap of human flesh. Body parts of young men and their families scattered across burning buildings and pulverized concrete. Those still alive were hauling whatever remained of their bodies across the sea of the dead, mostly in their graduation uniforms.

It was a moment of disbelief, of questioning much of what we’d previously held to be true. It came as a shock and awe to our collective consciousness, and was further bolstered by endless days of constant shelling and tragedy. And the tide began to change as if the moment of death, of release, was the very moment of liberation. Gaza’s thousands of victims may have produced the nudge for millions around the globe to begin to finally confront their inner fear, their subtle sense of shame for allowing a tragedy of that magnitude to continue for all of these years.

As Gaza held strong proving once and for all that unspoken values — human spirit, the will of the people, the collective dignity of a nation — was stronger than all that military genius can possibly generate, millions went to the streets in a most disorganized, chaotic and yet genuine expression of human solidarity witnessed in many years.

The tide has changed, then, and continues to change. The frenzied and disorganized, yet real sentiments have become an unwavering and well-articulated commitment to justice. The shift cannot always be validated by numbers or demonstrated in charts, but is nonetheless felt widely. Israeli researchers refer to it as the global movement aimed at delegitimizing their country. They are laboring to link it to anti-Semitism somehow, but to no avail. Palestinians and their friends vary in their own reading of what happened during and after those fateful days, but contend it was Israel’s murderous acts that incepted and cemented the process of its own de-legitimization. Gilad Atzmon & The Orient House Ensemble articulate it in music — melancholic at the start, but upbeat and unwavering later on.

And So Have We, another track, starts with the soft cries of Gilad’s saxophone, accompanied by the sound of drumbeat, and haunting vocals is a sad procession. It invokes the sounds and feelings of the Freedom Flotilla, laden with people from around the world united by a mute sense of powerlessness, then emancipation. When the hundreds of activists set sail abroad the Mavi Marmara and the other ships, they freed themselves and the rest of us from the stifling weight of inaction in the face of injustice. It lifted for a moment the huge burden on our collective conscience. It showed civil society at its best, its most humane members sailing and braving the high seas to extend a lifeline to Palestine, to Gaza, which had been left undefended, hungry and alone — but never defeated.

Much has been said about the Freedom Flotilla. Hundreds of television and radio shows ran discussions and debates about its significance. Thousands of articles were published, and many books will follow. Even YouTube was caught in the storm. But in the midst of articulation and counter-articulation, a sentiment so beautiful, so poetic was lost; no words can possibly describe the triumph of human dignity that day, no matter how lucid or earnest.

It really takes a bit of imagination. We have been forced to believe that the world is now divided between civilizations that are willing to fight and kill to impose their collective will on the rest of us; that we had no other option but to join that clash of civilizations or to perish. That ‘our way of life’ — whomever we might be — is now being challenged and threatened. That conflict is hardly based on class analysis, gender, racial or any other classification, but is a clash between religion-inspired collectives.

That was then. Now we have seen hundreds of people, of different religious beliefs, value systems, races and class affiliations leave their homes, families, livelihoods, and entire worlds behind, staring death in the face on their way to Gaza. They have confronted and defeated the old but persistent illusions. They have demonstrated that it isn’t what divides us that matters. What unifies us is much stronger, real, deserving, lasting and worthy of celebration.