China Rising: Where Do They Go From Here? 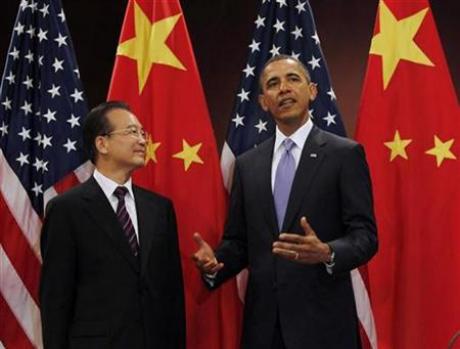 For the last several years, one major theme has dominated the subject of the future of Asia: the rise of China. But in recent weeks, increasing security disputes with many of its neighbors has given a number of golden opportunities to the two countries that have been watching China’s rise with some alarm.

For the last several years, one major theme has dominated the subject of the future of Asia: the rise of China. As the nation rises, its neighbors are being inevitably drawn into its orbit, currying favor with the region’s new hegemonic power. It therefore stands to reason that the obvious loser here is the United States, whose wealth and influence are being spent on wars in Iraq and Afghanistan and whose recent economic woes have fast eroded its standing in a more dynamic Asia. But in recent weeks, increasing security disputes with many of its neighbors has given a number of golden opportunities to the two countries that have most been watching China’s rise with some alarm. 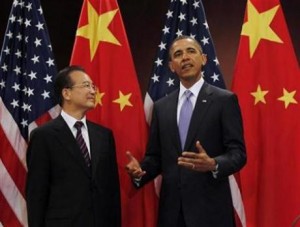 In the first year of the Obama administration, the foreign policy towards China was supposed to be based on the underlying assumption that the world’s major powers ultimately share the same threats and interests: tackling terrorism and pandemics, ensuring economic instability, and preventing nuclear proliferation. The Obama administration hoped to build on these shared interests to bring emerging powers, like China and Brazil, fully into the US-led international order. The hope was, as Secretary of State Hillary Clinton, put it in 2009, to consign geopolitical competition to history.

Accordingly, the administration worked hard to deepen strategic and economic dialogue between the two countries in order to bring China more fully into the international order. No actions were taken that would antagonize Beijing. So, in 2009, President Obama did not meet the Dalai Lama and accepted a tightly choreographed visit to China, while his administration initially avoided selling defensive arms to Taiwan and explored adjustments to its relations with India.

What followed thereafter came as a shock. China became far more antagonistic and assertive on the world stage. It expanded its claims in the South China Sea, engaged in a major spat with Google over Internet freedom, played an obstructionist role at the climate change negotiations in Copenhagen, regularly and openly criticized US leadership, and, sought to water down sanctions against Iran’s nuclear program at the UN Security Council — just to name a few. Analysts clearly stated that Beijing had sensed its opportunity and tried to push the bolt home.

The United States’ regional allies and partners, meanwhile, expressed their concerns over this turn of events and called upon the United States to restore its traditional leadership role in the region. The mounting evidence that China simply isn’t interested in becoming a full stakeholder in the US-led liberal international order has forced the administration to respond with a new policy in Asia. In addition to ongoing engagement with China, this new tack seeks to deepen US ties with other powers in the region, and unlike the earlier approach doesn’t shy away from advancing US interests and values–even if it upsets Beijing.

The United States, and the Obama administration, is keen to stay on top of every opportunity that comes their way. As a result, Washington has been quick to intervene in the middle of heated territorial disputes between China and Southeast Asian nations despite stern Chinese warnings that it mind its own business. Plus, it carried out naval exercises with South Korea in order to help Seoul rebuff threats from North Korea even though China is denounced these exercises, saying that they intruded on areas where the Chinese military operates.

Meanwhile, China’s tense stand-off with Japan, along with the recent blocking of exports to Japan of a crucial category of minerals (rare-earth elements, in short) used in products like hybrid cars, wind turbines, and guided missiles, has done nothing but to push Japan back under the security umbrella of the United States.

The Obama administration is also currently wooing Vietnam; a region it feels can be of use as an ally, considering it has the Asian giant at its very doorstep. US Secretary of Defense Robert Gates made an official visit to Vietnam this October 11th, where the two countries discussed their cooperative efforts to search for the remains of US MIAs, overcoming the war’s consequences and developing international trainings, including teaching each other Vietnamese and English.

In addition, Vietnam’s Deputy Minister of National Defense Nguyen Chi Vinh Vinh returned in September from a three-day visit to the US where he met with leaders about the first-ever ASEAN Defense Ministers’ Meeting Plus (ADMM+) that was held on October 12th in Hanoi. Asserting that the two countries had made headway in terms of security and policy issues, Vinh said, “Vietnam-US’s national defense relationship has made progress recently.” He attributed this development to the improvement of the two countries’ general relationship and US interest in the region.

To be sure, the historical relationship between the countries has been nothing short of tumultuous. However, the two nations’ alignment on the issues such as that of the South China Sea illustrates the emergence of a more forward-looking relationship, said Kim Ninh, the country representative in Vietnam for The Asia Foundation, which is based in San Francisco. Some would say, quite rightly, that the United States has shown a great deal of political shrewdness in coming to the aid of smaller countries in the regions that require their assistance.

Naturally, Beijing resents interference by a distant power in a region where its influence might otherwise go unchallenged. But China’s military buildup and the increasing pressure it has been putting on its South China Sea neighbors — by frightening oil companies away from exploring off Vietnam, for example — have raised a lot of resentment in countries much smaller than it. Although some countries remain reluctant to speak out for fear of offending China, most now worry more about creeping Chinese hegemony than they do about U.S. imperial behavior.

Ultimately, many believe Beijing has aspirations to assert a “Monroe Doctrine” to exclude non-regional powers from East Asia. The latest US-ASEAN Summit yet again highlights ASEAN’s need to hedge/balance an economically, politically and militarily rising China. The United States will continue to have an important place in the regional multilateral architecture: even though the US is not considered as a part of East Asia, it is very much a part of the larger Asia-Pacific region. The issue of the South China Sea disputes were uppermost in their minds when Southeast Asian leaders met in New York. However, ASEAN’s diffidence in naming the point of concern in the Joint Statement following the Chinese Foreign Minister’s protestations in August that the US was ganging up against China shows that it would require determination to contest China’s claims in the South China Sea, which Beijing now considers a core interest on par with Taiwan, Tibet, and Xinjiang. In fact, in itself, ASEAN has proved to be a very poor vehicle for pressing the Southeast Asian claims because only half its members are concerned about the issue. Nor has there been a tendency on the part of the participating countries to show China a united front, even with the presence of the United States. But the Hanoi meeting has again brought the issue to international attention and reminded Japan, Russia and other nations that no one has an interest in seeing Beijing in control of the strategically vital South China Sea.

The other country that has been warily watching the spreading of China’s tentacles has been India. As another emerging power in the region, India is alongside China in leading the global recovery. However, like most countries within the region, China’s growing assertiveness has worried the Indian administration. As New Delhi prepares to take on a larger and more focused international profile as a United Nations Security Council member from next year, one of the most major foreign policy hurdles lying ahead is tackling China. A significant Chinese presence is already visible in the countries bordering India, and this is only likely to increase. The latest Indian concern arises out of the ‘capacities’ the Chinese are building — to wit, the extension of the world’s highest rail link, the Qinghai-Tibet Railway, to Xigaze, the second largest city in Tibet. The move has caused unease in New Delhi, as the rail link would now be closer than ever to China’s border with Nepal. 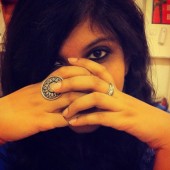