Bibi Back at the White House 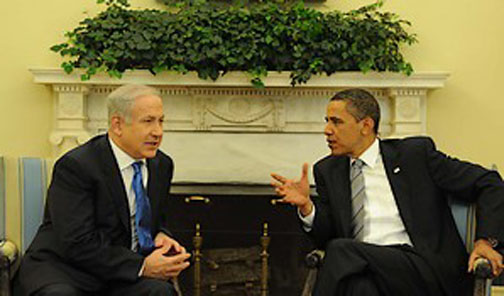 The Consistency of Israeli Duplicity Comes Ever More Clearly in Focus

This article was first published at Criminal State. It has been republished here with permission from the author.

U.S. military leaders will be watching this meeting very closely, as will the veterans community.

At his law offices in Washington, Harry described his arrival in Tel Aviv the night that the 1967 War began. That war typifies the consistency of this ongoing deceit. 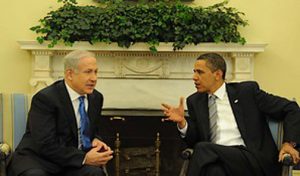 He flew in the night before from Vietnam through Hong Kong. He knew on arrival that something was amiss because the airport lights were off. He checked into his hotel and was awakened early on June 5th by Wally Barbour, the U.S. ambassador to Israel.

A pear-shaped diplomat with a penchant for yellowing Palm Beach suits, Barbour called to tell Harry that the war had just broken out—to which he replied, “But I just come from the war.”

Barbour picked him up at the hotel and they hurried to the foreign ministry for a brief meeting before conferring with the Israeli chief of military intelligence. In response to their repeated question, “Did the Egyptians attack?” McPherson and Barbour received only evasive answers. As air raid sirens wailed, McPherson recalls in A Political Education:

Barbour suggested that we might continue the discussion in the underground bunker. The general studied his watch. “No, that won’t be necessary. We can stay here.” Barbour and I looked at each other. If it wasn’t necessary, the Egyptian air force had been destroyed. That could only have happened so quickly if it had been surprised on the ground. We did not need to ask for confirmation, but left at once to cable the news to Washington.

Israel was neither under attack nor under threat of attack as its leadership has since conceded. Air raid sirens were just props in the stagecraft of waging war by way of deception.

The Israel-as-victim storyline was stage-managed by Zionist extremists to make both Israeli citizens and foreign observers believe that the Jewish state was endangered. As with the phony intelligence that induced the U.S. to war in Iraq in March 2003, the facts in June 1967 differed dramatically from the geopolitical narrative.

Under cover of that false attack, Tel Aviv occupied land belonging to its neighbors. The bulk of that property is still held by force 43 years later with the support of the U.S. as its oft-duped ally.

In the lead-up to Israel’s Six-Day Land Grab, Johnson was lobbied by U.N. Ambassador Arthur Goldberg. LBJ had moved Goldberg from the Supreme Court to the U.N. so he could be replaced with Abe Fortas, Johnson’s personal lawyer. Fortas was a senior operative in a network of Zionists who helped produce the Johnson presidency and shaped its policies.

When Goldberg used heart-rending rhetoric to weave for Johnson a storyline about Israeli vulnerability and the pending victimization of hapless Jews at the hostile hands of an Arab “ring of steel,” LBJ waved a Central Intelligence Agency report predicting that Israel could win any war in the region in two weeks.

When Goldberg persisted, Johnson ordered the CIA to revisit their analysis. The agency returned with a revised report concluding that Israel could win any war in the region in one week.

When the president turned to McNamara for his opinion, the Pentagon chief agreed with Johnson that there would be no war. Johnson then confirmed that U.S. intelligence agencies agreed with McNamara’s assessment. Johnson left for the White House at 10:58 p.m.

Less than six hours later, at 4:30 a.m. on June 5th, National Security Adviser Walt Rostow called LBJ to announce that Israel had attacked Egypt. Mathilde Krim, a former Irgun operative, was Johnson’s guest at the White House that night. Before informing anyone else, LBJ stopped by the blonde beauty’s bedroom to tell her, “The war has started.”

Not until 7:45 a.m. did Johnson speak with Soviet Premier Aleksi Kosygin who expressed his hope and expectation that the U.S., as Israel’s closest ally, would restrain Tel Aviv.

Mathilde Krim was the wife of Arthur Krim, chairman of the Finance Committee for the Democratic Party and president of United Artists. While Johnson was in the Senate, Krim bought land near the LBJ Ranch in Texas where he built “Mathilde’s House.” When Arthur was away on business, Johnson routinely took Marine One, the presidential helicopter, to visit Mathilde.

In the war’s first few hours, the “victimized” Israelis destroyed the Egyptian Air Force while its aircraft were still on the ground. Walt Rostow sent Johnson a memo describing the success of Tel Aviv’s “vulnerable” military as “the first day’s turkey shoot.” By evening, the Jordanian air force was also largely destroyed.

Johnson also received a memo from Arthur Krim that read, “Many arms shipments are packed and ready to go to Israel, but are being held up. It would be helpful if these could be released.” Johnson ordered them released.

By evening of the second day, two-thirds of the Syrian air force had been destroyed. The glee in the State Department Operations Room was palpable, leading Under Secretary of State Eugene Rostow to caution, “Gentlemen, gentlemen, do not forget that we are neutral in word, thought and deed.”

At the State Department’s mid-day press briefing, spokesman Robert McCloskey repeated Rostow’s official “neutrality” lie. Zionist advisers surrounded Johnson in the decision-making that lent U.S. support to the 1967 war. “Everyone around me, without exception was pro-Israel,” recalls Johnson speechwriter Grace Halsell. She identified more than a dozen close advisers to Johnson, including Walt Rostow, his brother Eugene and Arthur Goldberg.

The Non-Separation of Powers

In the lead-up to this Israeli aggression, Fortas served as an enabling back channel between the Israeli embassy and the White House. Fortas had known Israeli Ambassador Avraham Harman since the ambassador’s arrival in Washington in 1959. During the March 1960 visit to Washngton of Prime Minister David Ben-Gurion, Fortas sponsored a breakfast at his home attended by Harman and Johnson who was then Senate Majority Leader.

Fortas’ biographer conceded: “For several weeks before the crisis erupted into war, the Israeli ambassador was ‘in very frequent contact’ with Fortas and regularly visited the justice at his chambers or his house.” An outspoken Zionist, Fortas also attended a critical White House strategy meeting on the Middle East on May 26th, ten days before the land grab began.

When it came to Israel, Fortas was never neutral. “When they get back from Egypt,” a law clerk in his Supreme Court chambers overheard Justice Fortas say, “I’m going to decorate my office with Arab foreskins.”

Throughout the six days of carnage that Israel inflicted on its neighbors, Near East experts met daily with Johnson in the Cabinet Room. Fortas attended each meeting. Reflecting on comments by Fortas to Johnson at their June 4th dinner party, John Loeb wrote to Fortas on June 6th: “You were prophetic about the Middle East. Thank the Lord the President has you as a friend and counselor.”

In 1968, Johnson failed in his attempt to elevate Fortas to Chief Justice of the Supreme Court. Fortas resigned in May 1969 in the wake of a series of scandals. In the summer of 1970, The New York Times reported his registration as a lobbyist for Kuhn, Loeb & Company.

Fortas cemented his relationship with Johnson in 1948 when, in LBJ’s first Senate race in Texas, the Washington lawyer finessed the extensive vote fraud apparent in the Democratic primary in which Johnson claimed an 87-vote victory, including 200 votes tallied in alphabetical order.

A Fortas-devised legal strategy led to Johnson’s name appearing on the November ballot as the Democratic Party nominee. In a strongly Democratic state, that primary victory assured the ambitious Texan a victory in the general election and a seat in the U.S. Senate. Decades later, those familiar with this political history continued to refer to him as “Landslide Lyndon.”

The Six-Day Slaughter of 1967 pre-staged the geopolitical dynamics for all that has followed—not only in the Middle East but also in the U.S. as Israel’s violent taking of land outraged everyone in the region and set American foreign policy on today’s ruinous course.

The periodic carnage visited on Palestinians ensures that this strategic provocation remains fresh in the minds of Muslims worldwide. Reactions to these serial provocations, in turn, fuel the plausibility of the latest storyline, The Clash of Civilizations and its corrosive counterpart: the Global War on Terrorism with “Islamo fascism” the essential Evil Doer branding.

Israel has performed with reliable consistency every act required to provoke and sustain extremism in the Muslim world. Only by duplicity has the Zionist state sustained a U.S. alliance whose main effect has been to make America appear guilty by association.

On August 9, 2000 in a White House ceremony, President Bill Clinton presented Johnson paramour Mathilde Krim with the Medal of Freedom. By then this former Irgun terrorist had been rebranded as a high-profile medical researcher and AIDS activist adored and promoted to political prominence by her pro-Israeli supporters in Hollywood.

It’s not expected that Israeli-American Rahm Israel Emanuel, White House Chief of Staff to Barack Obama, will urge that Monica Lewinsky receive the nation’s highest civilian honor. It’s not yet known what role Emanuel and White House political strategist David Axelrod have played in sustaining our costly “special relationship” with the Jewish state.

As yet another Israeli Prime Minister arrives in Washington with yet another rationalization for continuing this entangled alliance, a nomination is pending for the appointment to our highest court of a third Jewish Zionist for a court with just nine jurists. In time, historians will identify the role played by the Israel lobby (and Emanuel/Axelrod) in the nomination of Elena Kagan.

Based on the consistency of “Bibi” Netanyahu’s duplicitous conduct over decades, Barack Obama needs to know when an Israeli Prime Minister is once again deceiving a U.S. president. History suggests a reliable test: are his lips moving?

The End of History

Though the U.S. has been deceived with stunning consistency for more than six decades, a mid-course correction remains possible. If this latest president can concede to himself that his political career is a product those complicit at this deceit, he may yet emerge as the transformative leader that his supporters once hoped he could be.

If Barack Obama can be honest with himself, he will speak candidly to the American people and explain why this long-running deceit must be brought to a speedy close. If on July 6th he announces support for a one state solution, that will start to unwind this perilous alliance.

Senior military leaders have confirmed the common source undermining U.S. national security. Should the current commander-in-chief fail to act consistent with the known facts, this latest political product of the Chicago Outfit may risk their continued allegiance.

To advance peace, he needs only declare U.S. support for the designation of Jerusalem as an international cultural site under the protection of U.N. troops. To end the multi-decade cycle of provocation/reaction, he needs only reassign 30,000 U.S. troops to Palestine to rebuild a destroyed society, resettle its ousted people on occupied land and secure Israel’s nuclear arsenal.

The Zionist experiment was a failure before it began. An overdue end to this apartheid regime can begin July 6th. Or this perilous alliance can continue—at untold cost in blood and treasure.

July 6th could be a defining moment for a president in need of such a moment. That date could also mark the restoration of American values to U.S. foreign policy and grant solace to those moderate and secular Jews long appalled at the conduct of Zionists who in 1948 deceived a U.S. president to recognize as a legitimate state their extremist enclave in the Middle East.