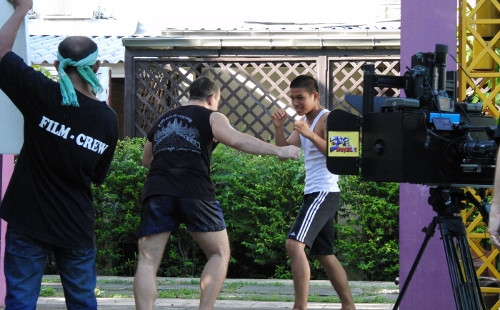 It’s a whole new art, both fighting and filming

Watching the proof of our 3D martial arts fight on a video monitor was incredible. The spinning, dancing, battling images popped off the screen like holograms in some advanced video game, but it wasn’t a random CGI image, it was me. And it was one of the coolest projects I had ever been involved with.

My greatest aspiration is to one day become an action figure.

The video was cut into a series of free promos that will be running online at 3Dguy.tv and on YouTube, which you can watch with 3D glasses. A new martial arts series will be launched in August, hosted by me. As far as we know, it will be the first ever 3D martial arts series. 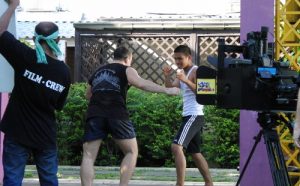 The way I got involved in this project involved a lot of luck. I had just arrived back in Bangkok, when Al Caudullo, who owns a company I had worked with last summer, 3D Guy TV called me for a one-day video shoot. He asked me to bring a friend, to be my opponent, and we filmed in a park.

Shooting 3D is a whole new art and presents a lot of different problems, compared to regular 2D movies. First off, movie sets which work in 2D will not work in 3D because they will look flat. Movie sets today, especially large sets, like cityscape backgrounds, are done in 4th Dimension.

If you wanted to shoot a movie and have the characters in New York and you wanted the Empire State Building, Rockefeller Center, and the New York Public Library in the background, first off, those buildings are nowhere near each other, so it would be impossible to get them all in a single shot. Next, they are so big that if you had two people standing in front of them, you wouldn’t even recognize the buildings or wouldn’t be able to see very much of them. So, you create a 4th dimension set. The set would be custom made, including the buildings you wanted. Then they would be shrunk down to a size that would make them appear bigger than your characters but small enough to fit into the frame. Next, to give them depth, there would be a mix of 2D and 3D scenery. If you go to the New York section of the Universal studios, you will find a small version of the New York Public Library. The building is mostly a flat painting, but the stone staircase in front is real. And part of the lion statues is real 3D. The other parts are painted. To complete the illusion, a 4th Dimension set is tapered on the sides so that it creates an artistic vanishing point, to make it appear that you have a wide shot and the images melt away into the horizon at the ends of the shot.

In reality, if you shoot a picture of a building in New York and had the same perspective, your characters would be like two ants, barely visible in the foreground.

With 3D, things change. If you shoot the same set on 3D you would be able to see that half of it was painted on the wall and that the parts that stuck out were only inches deep. Remember 3D gives real perspective. 4th Dimension only gives the illusion of perspective.

So, a lot of old scenery will have to be scrapped when shooting in 3D. Luckily, my shoot was outdoors, in a garden with a playground.

When we arrived at the shoot, I immediately spied a gazebo which had a roof made of crisscrossed steel. I thought, wow! Perfect. We could put the cameraman up there and he could shoot from bird’s eye perspective, down through the holes in the steel.

But with a massive 3D rig of 23 kg, plus a monitor, it would have been nearly impossible and stupid to try and climb up anything. Next, Al explained that if you shot directly overhead with a 3D camera, the actors would look like they were six inches tall.

I am already self conscious about my height. So we left the bird’s eye shot out.

While we are on the subject of body image issues, I got seriously out of shape in Malaysia. With 3D I was worried that I would look even fatter, or my fat would come out of the screen and spew onto the audience. In normal shooting, a camera adds ten pounds, so I never do a three camera shoot. But with 3D, I was really worried I would look like Jabba the Hut.

The other thing I was concerned about was whether or not I would need to wear the glasses during the shoot. It seemed safer not to wear them. But then I was worried I wouldn’t appear in 3D.

Al told me not to worry about the fat thing. Then he called me an idiot for asking about wearing glasses during the shoot. It’s refreshing, working for someone from Brooklyn, who knows how to speak his mind, even if his mind is full of venom.

When Al said “action,” we began fighting. Ulysses is an experienced Muay Thai fighter. He has had a number of fights and spars regularly. So he knew how to circle, stick, and move. The problem is, in movie fighting that can be very boring. For one thing, real fights are composed of five two-minute rounds. The first two rounds are usually pretty slow, with two fighters feeling each other out. They don’t really get going till the third and fourth round. But in a movie, a fight scene rarely lasts more than a minute or a maximum of three minutes, unlike a real fight.

The audience doesn’t want to see circling and isolated strikes. They want to see pounding and pounding, and hitting, and popping and possibly some blood and death.

I explained to Ulysses that in movie fighting he just needed to hit and hit with intensity and not worry about getting hit back. We started fighting again and Ulysses, to his credit was doing much better, but Al stopped us again.

“3D is not just a film effect.” He explained. “It is psychological. It is an illusion. The audience sees the 3D because they believe in it.” Al went on to teach us that if during the fight we moved too much and part of our bodies went out of frame, or we got cut in half, the part that remained on screen would revert to 2D and the scene would be ruined. “As good as the movie Avatar was, there were several scenes where the movie went back to 2D because of these types of mistakes.”