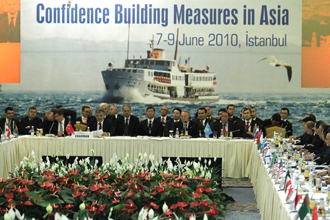 A general view of the Interaction and Confidence Building Measures Conference in Asia (CICA) at Ciragan Palace on June 8, 2010 in Istanbul, Turkey. Photo - Getty Images

A general view of the Interaction and Confidence Building Measures Conference in Asia (CICA) at Ciragan Palace on June 8, 2010 in Istanbul, Turkey. Photo - Getty Images

Who? Twenty one states from Europe and Asia flayed Israel.

What? Member states of the Conference on Interaction and Confidence Building Measures in Asia (CICA) slammed brutal actions taken by the Israeli forces and termed it as a blatant violation of international law.

Where? The summit took place in Istanbul, Turkey.

When? The two day summit issued a joint statement on Tuesday afternoon, 8 June.

Why? The Zionist state came under heavy fire due to the bloody raid on the Turkish-flagged aid vessel Mavi Marmara which claimed the lives of 9 Turks including an American national of Turkish origin. “All member states except one expressed their great concern and condemnation for the actions undertaken by the Israeli defense forces against an international civilian flotilla transporting humanitarian aid to the Gaza Strip,” Turkish President Abdullah Gul said in his closing speech.

How? All CICA members except Israel, which is a member of the organisation, called for an Israeli withdrawal from all Arab lands occupied in 1967, the establishment of an independent Palestinian state with Arab East Jerusalem as its capital and a solution to the Palestinian refugee problem on the basis of UN resolutions. However, the member states did not give any indication on how they will work to enforce their demands.