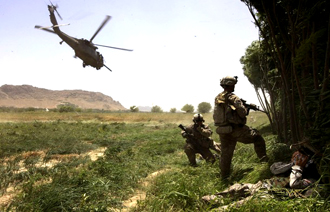 What? Fresh Taliban attacks killed at least four U.S. soldiers, part of the International Security Assistance Force (ISAF) – a joint command of U.S. and NATO troops, by shooting down their helicopter. Another ISAF trooper lost his life in a roadside bomb. Moreover, a NATO supply convoy was attacked near Islamabad, Pakistan, in which seven people died.

Where? The chopper downing took place in Sangin district of Helmand province, southern Afghanistan. The location of the roadside bombing has not been released yet.

When? A NATO convoy was attacked on late Tuesday whereas the helicopter attack as well as the deadly roadside bombing took place on Wednesday, 9 June.

Why? Taliban have increased the intensity of their attacks on occupation troops in Afghanistan as the war enters its ninth year in couple of months. The Islamist guerrillas want the ejection of foreign troops as well as the reinstatement of the deposed Islamic Emirate. U.S. along with NATO invaded the country in October, 2001, on the pretext of destroying al-Qaeda soon after the 9/11 attacks on American soil.