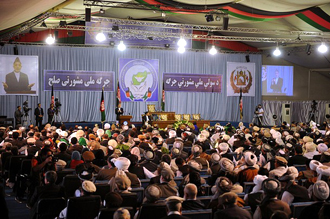 Who? Taliban attacked the venue of Afghan national gathering.

What? The Islamic movement launched the daring raid on the Loya Jirga or grand council attended by 1,500 delegates from all over Afghanistan.

Where? The attack took place near the University of Kabul where a large tent is set up to hold the conference.

Why? Taliban oppose the conference saying it does not represent the Afghan people, and is aimed at “securing the interests of foreign occupiers”. The Islamic militia has intensified its campaign to expel the U.S. and NATO forces from Afghanistan by launching audacious attacks on foreign forces across the country. The resistance movement also wants an end to Karzai’s government in Kabul as well as the provincial setups run by former warlords.

How? Some reports suggest the attackers wore burqas as they stormed the heavily fortified perimeter of the university. The guerrillas were armed with suicide belts and lobbed rockets at the venue which missed the target by couple of hundred meters. One attacker was nabbed by the Afghan security forces.