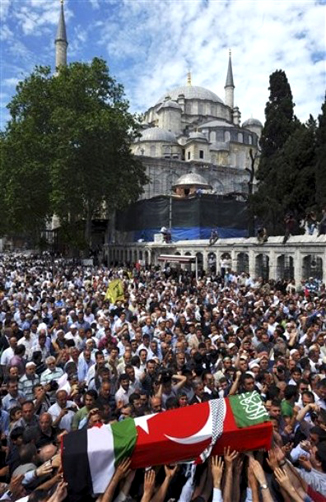 People carry the coffin of a victim of the Israeli terror raid on Freedom Flotilla in Fatih Mosque in Istanbul, Turkey. Photo - AP I

People carry the coffin of a victim of the Israeli terror raid on Freedom Flotilla in Fatih Mosque in Istanbul, Turkey. Photo - AP

What? “Relations between Turkey and Israel will never be as they were [before the attack],” Gul said in a televised broadcast. “Israel has made one of the most glaring mistakes in its history, for which it will repent” the 59-year old head of state warned.

Where? The statement was made in a televised speech to the nation.

When? President Abdullah Gul gave the rousing speech on Thursday morning in the wake of the funerals held for the 9 victims of the Israeli massacre of Gaza Freedom Flotilla passengers.

Why? Israeli raid on the Turkish flagged Mavi Marmara ship resulted in the deaths of eight Turkish nationals and an American national of Turkish descent. Dozens of other people were injured, majority of them Turkish. President Gul’s speech reflected the public rage towards the Zionist state.

How? The Turkish leader gave strong signals that Ankara is set to revise its ties with Israel in a bid to punish the Zionist atrocity against its citizens. Turkey has already recalled its ambassador from Tel Aviv. Nicaragua has suspended its diplomatic ties with Israel while South Africa and Ecuador have recalled their ambassadors from Israel to show their solidarity with Turkey.