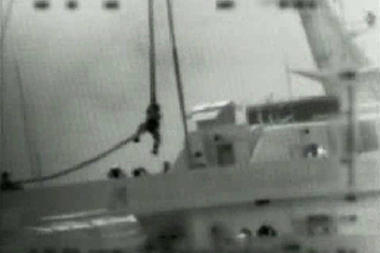 An Israel commando illegally boards the Mavi Marmara in international waters. The ship was part of a flotilla delivering humanitarian supplies to the besieged Gaza Strip. (IDF/AP)

The tragic events that unfolded on the Mavi Marmara marks another chapter in the harrowing tale of Israel and Palestine’s ongoing conflict.  The attack left at least 10 civilians dead and several injured. Yet news reporters and bloggers have been scrambling to justify the Israeli commandos’ actions.

The standard script the media have come up with is that the commandos acted in self-defense because the people on the ship attacked them. The dialogue should be about self-defense, but whose right to self-defense? 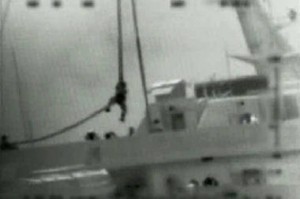 An Israel commando illegally boards the Mavi Marmara in international waters. The ship was part of a flotilla delivering humanitarian supplies to the besieged Gaza Strip. (IDF/AP)

The reports stated that the members of the flotilla were contacted and that they refused to let Israeli officials inspect their cargo. First off, the members of the flotilla were right to deny the request just as a person can refuse to let someone in that knocks at their door. The flotillas did not belong to the Israeli government and neither did the international waters that they sailed on. All the Israeli officials can do is simply request to board the ships.

Secondly, the Israeli officials did not have legitimate reason to suspect that any of the members were armed and planning to bring weapons to Hamas. On several occasions boats have tried to sail to Gaza and bring aid to Palestinians. Not once have Israeli officials reported finding weapons. Never have the media reported that the aid workers opened some of their shipment of goods to reveal their cleverly disguised weaponry and did battle with Israeli commandos on the high seas.

Israeli officials and their intelligence-gathering network could have applied some deductive reasoning. A boat of humanitarian workers was once impounded and taken to Ashdod, and upon inspection, no weapons were ever found. Based on past experiences with aid workers sailing to Gaza, never has there been evidence to support claim that they would smuggle weapons to Hamas.

Arguing whether the people aboard the ship had weapons tries to give the Israeli government an acceptable accounting of their illegitimate behavior. Seeing how the Israeli officials have no concrete evidence of there actually being weapons, there was no reason for the commandos to be there in the first place.

It also ignores the fact that the Israeli government is a violent, aggressive institution that is indistinguishable, at this point, from Somali pirates. Who was to protect the people aboard ships from the violent impulses of a government that has been known to shoot down unarmed civilians and children who object to their criminal rule?

In a very feeble attempt to restore some credibility to the Israeli government, news reports stated that the members of the flotilla attacked the Israeli commandos with metal poles, knives and guns. The fact is irrelevant because the commandos’ reason for being there in the first place is illegitimate, and the attack came after the fact. The Israeli government’s initial concerns were weapons might be smuggled to Hamas, not to find out if the aid workers had the audacity to defend their property.

Suppose a robber knocks on your door and demands that you let them in so that they may rifle through your personal belongings and take whatever he desires. Suppose you refuse. Then the robber later returns, under the cover of darkness, and breaks into your house and guns you down and kills you when you try to defend your property. Can he tell the police he is the victim? The robber’s legitimate reason for being there in the first place would come into question, as should the Israeli commandos’.

Finally, Gaza is still illegally occupied territory. The occupation is an ongoing criminal action perpetrated by the United States and Israel. No one sailing to Gaza should have to answer to any government about whether they can enter Gaza except the Palestinian government.  A Palestinian government should decide if humanitarian supplies like paper from aid workers posed a monumental threat to the lives of civilians.

Just as no one has to obey the dictates of a mafia-hood illegitimately controlling a territory in some city’s neighborhood, no one, then, has to answer to a criminally aggressive government.

There should be no forum to let Israeli officials explain themselves. What took place was murder. The commandos and those who gave the order should be in facing charges.

One would have to wonder if it had been the Iranian commandos killing humanitarian aid workers friendly to the United States and Israel at night, there probably would have been war by morning. 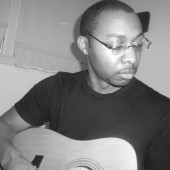 Jamaal Long is researcher, writer, and photographer for Garrison Daily.com. He has focused his writing on the Palestine/ Israeli conflict and issues relating to Afghanistan.