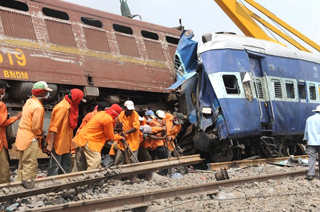 Who? Indian authorities are searching for Maoist rebels.

What? A train crash involving a packed passenger train and a goods train killed at least 115 people while injuring more than 200 others. Indian authorities blamed Maoist movement for the atrocity. Dozens of people are said to be in critical condition.

Where? The carnage took place when thirteen carriages of the Gyaneshwari Express travelling from Kolkata to Mumbai jumped the tracks and collided with an oncoming goods train in Jhargram area of West Bengal state’s Midnapore district.

When? The attack took place at around 0130 local time on Friday morning, 28 May.

Why? The Maoists, also known as Naxalites, are waging a war in the name of rights for the poor and deprived people including marginalised tribes, lower castes and peasants in eastern and central India. The movement, that started in 1967, has its strongholds in West Bengal, Bihar, Jharkhand, Chattisgarh, Andhra Pradesh and Orissa states of India. They intend to establish a Maoist-style Communist state by overthrowing the Indian government.

How? The communist insurgents mount ambushes on police force and paramilitaries, detonate road-side bombs and target both civilian and military infrastructure like railway tracks, roads, mines and pipelines to carry out widespread sabotage. Reports suggest some 20,000 fighters form the deadly combat force that has claimed lives of thousands of people over the last 4 decades.