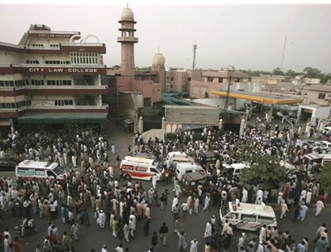 Who? Unidentified gunmen targeted members of the offshoot Ahmadi sect of Islam.

What? At least 80 worshippers lost their lives whereas 90 others were wounded in the twin attacks.

Where? The attacks took place at two mosques in separate neighbourhoods of the eastern Pakistani city of Lahore.

When? Assailants stormed the packed mosques during the Friday afternoon prayers.

Why? Ahmadis, also known as Qadianis in Pakistan, are labelled as infidels by the Muslim majority in the country. The offshoot sect believes that Mirza Ghulam Ahmad is the final prophet of Islam and not Prophet Muhammad. A religious movement in early 1970s forced the government of Pakistan to declare Ahmadis as non-Muslims.

How? The attackers, known to be at least four, entered two mosques armed with automatic weapons, grenades and explosives-packed jackets. They sprayed bullets while the Friday sermon was delivered. One assailant threw grenades from the minaret while three others exploded their suicide vests amidst worshippers triggering heavy fatalities.