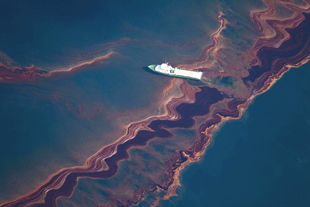 What? The British oil company geared up its efforts to put an end to the massive oil spill. The energy giant estimates that about 5,000 barrels (795,000 liters) have been leaking every day, although some scientists have given much higher numbers.

Where? The catastrophic spill continues in the deep waters of Gulf of Mexico near the coast of U.S. state of Louisiana.

When? The spill was triggered by a deadly blast on 20 April aboard the BP-leased Deepwater Horizon rig.

Why? London-based energy company has been struggling since the last five weeks to plug the oil spill in Louisiana waters. Media reports suggest BP’s response to the disaster was slow and cheap and not enough resources were employed to ensure environmental safety. BP strongly denies such suggestions.

How? British Petroleum is using a complex ‘top kill’ operation to try to halt the seabed well’s flow. This involves pumping heavy drilling fluids into the leaking pipeline.