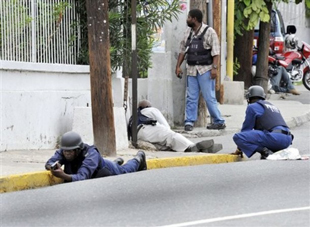 Who? At least 50 Jamaicans, including 44 civilians, were killed.

Where? The armed encounter took place in the streets of Tivoli Gardens slum of Kingston, Jamaica.

When? Violence broke out on Sunday 23 May when law enforcement agencies tried to arrest 42-year old Christopher “Dudus” Coke, a drug kingpin wanted by the U.S. government. Heavy gun battles continued in the area on Wednesday evening.

Why? Jamaican government acted on Washington’s request to extradite Christopher Coke who was indicted in the U.S. on charges of conspiracy to traffic in drugs and guns. He is accused of running a smuggling ring that exports cocaine and marijuana to New York and sends guns back to Jamaica.

How? A combined force of soldiers and police stormed the drug warlord’s hideout in armoured personnel carriers with support from sharp shooters. Members of the drug gang responded by automatic weapons and grenades. The country has one of the world’s highest murder rates. Around 1,660 homicides were recorded last year among a population of just 2.8 million people.