North Korea Readies Itself for War with Seoul 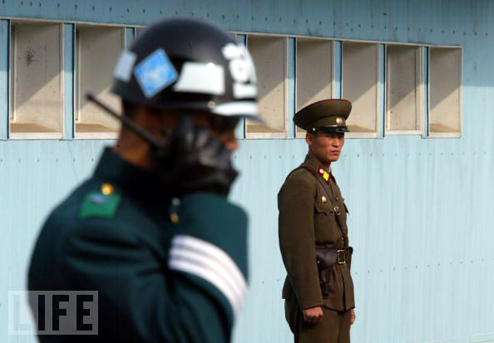 A North Korean soldier keeps an eye on his South Korean counterpart at Panmunjom on the North-South Korea border. Photo - Chung Sung-Jun/Getty Images

Who? North Korea threatened military action against its southern neighbour.

What? The Communist government issued a strong warning to South Korea.

Where? Democratic People’s Republic of Korea (DPRK) demanded an immediate halt to South Korean military activity in the waters off its west coast.

When? The strong worded statement was issued by Pyongyang’s official KCNA news agency on Tuesday.

Why? The ideologically rival countries are perennially embroiled in propaganda war and military rhetoric for the last 5 decades. South Korea relies on U.S. for military aid and assistance to ward off its Communist neighbour. North Korea depends on China for economic and diplomatic support.

How? A South Korean ship got sunk on 26 March. Seoul blamed North Korea for the loss of its 46 sailors after thorough investigations conducted by international observers. North Korea rejected the report and vowed retaliation if any action is taken.