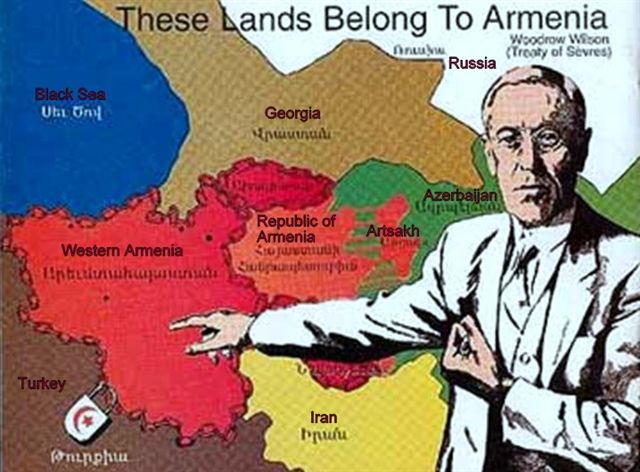 Woodrow Wilson, the 28th American president, is looking down in horror at what the Woodrow Wilson International Center for Scholars (WWC; WilsonCenter.org) is doing in his name.

Most Americans are not aware of the DC-based organization, or that their taxes comprise one-third of its multi-million dollar annual budget.

The WWC was created by Congress in 1968 through the Woodrow Wilson Memorial Act to commemorate the late president’s “ideals and concerns” and memorialize “his accomplishments.” 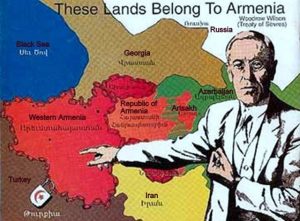 The WWC has in several ways, however, violated its Congressional mandate.

The WWC itself claims that it “takes seriously his [Wilson’s] views.”  In fact, it has knowingly disregarded many of his views.

And while it professes “to take a historical perspective,” the WWC often closes its eyes to history.

Case in point: In mid-June of this year, the WWC plans to travel to Turkey to bestow its coveted Woodrow Wilson Award for Public Service on Foreign Minister Ahmet Davutoglu.

Curiously, the WWC won’t provide this writer with a press release about it.  We know about the award only from the Turkish media and a call to the WWC’s communications chief.

The WWC’s director, former Congressman Lee Hamilton, says that Davutoglu “personifies the attributes we seek to honor at the Woodrow Wilson Center” and has “catalyzed” Turkish policy.

It is appalling that the WWC would honor a top official of a country that in so many ways is a major human rights violator. Moreover, Davutoglu’s own record — including his much- ballyhooed “zero problems with neighbors” policy — is undistinguished.

But even more to the point, Davutoglu’s policies are the very antithesis of Woodrow Wilson’s “ideals and concerns.”

Let us start with Davutoglu’s eruption against America due to a U.S. House committee’s approval in March of a resolution (Res. 252) that reaffirmed the factuality of and historic U.S. interest in the Armenian genocide of 1915-23 committed by Turkey.

Turkey immediately recalled its ambassador.  Davutoglu then announced that the House committee vote was an insult to his country’s “honour,” as if Turkey’s continuing cover-up of genocide is somehow honorable.  A top official of Turkey’s ruling AK Party threatened the US with “consequences.”  Turkey’s relationship with America, he warned, “would be downgraded at every level … from Afghanistan to Pakistan to Iraq to the Middle East process … there would be a major disruption.”

These were not just nasty overreactions by Turkey. They were also nonsensical.  The U.S. has, after all, reaffirmed the Armenian genocide as “genocide” at least five times: three resolutions passed by the full House (1975, 1984, and 1996); an official proclamation (No. 4838) by President Reagan (1981); and a U.S. legal filing with the International Court of Justice (1951).

Davutoglu threw the same sort of tantrum a week later — withdrawing his ambassador and making threats — when the Swedish Parliament recognized the Armenian genocide.

Turkey has thrown similar fits when some 20 other countries, the European Parliament, a U.N. sub-commission, the Vatican, and others recognized the Armenian genocide.

No other alleged “ally” threatens the U.S. as frequently and consistently as does Turkey.

Thus, far from “catalyzing” Turkey’s policies, the foreign minister is carrying on his government’s tradition of threats and genocide denial.  If such behavior “personifies the attributes” that the WWC “seeks to honor,” the Center’s standards must be low indeed.

“Turkey will not allow anyone else to evaluate its history,” Davutoglu blustered after the House committee and Swedish Parliament votes.

He seems unaware that countries constantly evaluate other countries’ histories.  Davutoglu evidently thinks that Turkey should be uniquely exempt from the judgments of others.

Davutoglu also seems blissfully unaware that the United Nations, the U.S., and many other nations and international organizations have condemned and continue to condemn various countries’ past (and present) crimes such as the Holocaust, genocides, bloody revolutions, and crimes against humanity.  These include the genocide now taking place in Sudan.

Not surprisingly, Turkey and Davutoglu have a horrendous record regarding Sudan.

Sudanese President Omar al-Bashir was invited to visit Turkey two years ago while he was under indictment by the International Criminal Court (ICC) for “war crimes and crimes against humanity.”

Human rights groups, such as Human Rights Watch, blasted Turkey for inviting the Sudanese dictator.  Turkey defiantly proceeded to welcome al-Bashir with a red carpet, an honor guard, and a 21-gun salute.